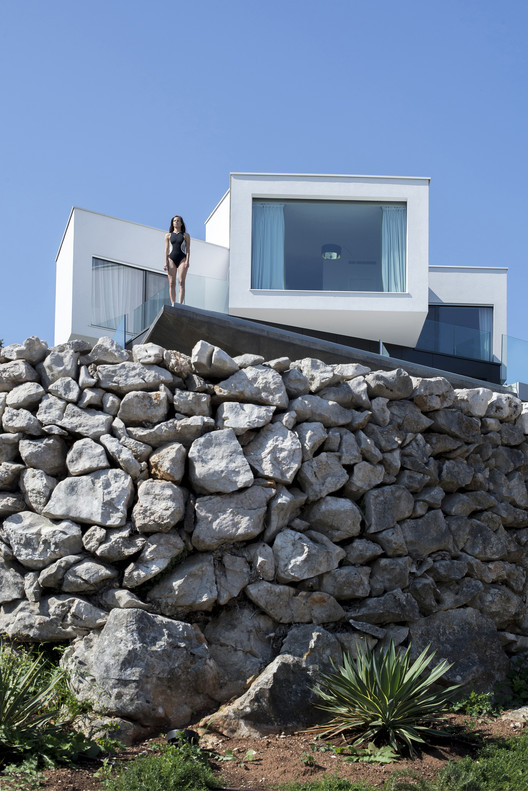 Text description provided by the architects. Gumno (threshing floor) is a circular flattened plateau surrounded by a low stone wall, used for threshing the grains in the past. Gumno was a place of labor, endeavor, and care, and a framework for consistent and coherent social interaction. Gumno served as a space for celebrating a high crop yield, as well as a meeting place where the locals made decisions on important issues that affected their community.

Risika is a small village which lies in the northeastern part of the island of Krk in Croatia. In a rather small area surrounding the village, there is a large number of derelict, overgrown, and rather inaccessible gumnos. Near the old village church, at the end of a line of small family houses, surrounded by a dry stone wall, one finds a small estate and a well preserved old gumno, which has not been in use for the past 40 years.

A married couple residing in Rijeka, together with their two adult children, decided to build a little summer house in that special location. It was decided that gumno, together with the circular dry stone wall, should be restored, and that the cultivated garden, driveway, orchard, and olive grove should become a kind of a contemporary park, a reanimated place where the family would meet with their guests, friends, and the locals of Risika.

Because of this setting, the house is withdrawn into the background, to the highest part of the lot, and built on the very rear setback line. This was made contrary to the initial urban plan which had proposed construction of the house within the building line of the local houses, as well as demolition of the old gumno.

In the initial stage of construction, a proposal was put forward to the inhabitants of Risika: an organized reclamation of the macchia shrubland with the purpose of connecting the remaining gumnos into a spatial ring, and creation of a new walking path which would contain a number of rest areas and meeting points.

Besides the gumno in the front part of the lot, and a vegetable garden and an orchard located behind the house, the architecture of the house and the park allows for a spontaneous creation of a unique drive-in plateau for the cars of the owners and their guests. This heterogeneous spatial composition, seen within the context of organization of the new house and a plethora of possibilities of its use, creates unexpected places of strong impressions and different experiences. These places have different characters and conditions of use.

The Gumno house accommodates three completely different contents, long wished for by all family members. The first is a massive, rustic cellar containing a konoba, which serves as a wine and oil storage space, as well as a place for gatherings. The second is a spacious glazed living room intended for the family.  Finally, the third is a big pool with an indispensable view of the sea. On top of the house there are four small units with intimate terraces and a quiet sleeping area for each member of the family.

Such a heterogeneous and spatially diverse program resulted in a house which assembles, blends, and compresses three different ambiances. These ambiances differ in their atmosphere, and are contradictory in regard to their space, functionality, and construction. The heavy, massive, buried, roughly hollowed out basement; the light and transparent, open plan, steel framed ground floor with glazed walls; and the small plastered units with large openings, protruding over the edge of the square ground floor, each in search of its own view and orientation.

The element of the large terrace-deck, a platform for gatherings, which is supported by a massive triangular structure, forms a quiet shadowy terrace for the cellar (konoba), but also a covered house entrance, and a curved staircase, the entrance promenade of the Gumnohouse. On the terrace, placed in a massive concrete cone, there is an irregularly shaped pool, a water cauldron of various depths, containing aquatic attractions, with a precise view onto the Crikvenica – Novi Vinodol Riviera.

On the one hand, the Gumnohouse provides tranquility and calm private use of the vacation house, but, on the other hand, it is easily transformed into a rich structure containing a series of gathering spots for a large number of people, numerous friends of this cheerful and social family.

When the Gumnohouse was finished, everybody was surprised to learn that the family decided to move permanently to what had previously been planned as a ‘’summer house’’, and use their family apartment in Rijeka only occasionally, for short work-related stays.

Note: This project was originally published in 30 December, 2014 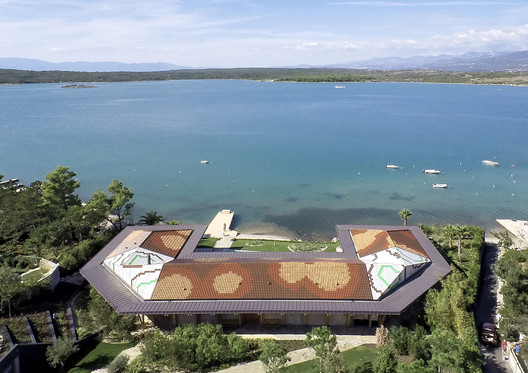