Hello Nature, the most recent ideas-based challenge organised by Combo Competitions, asked participants to design a structure that celebrates nature on an expansive site in northern Sweden at the foot of Omneberget mountain. Located in an area known as the High Coast (Höga Kusten), the site sits within an UNESCO World Heritage Site. Designers were asked to "highlight the relationship between humanity and the rest of the planet" in putting forward proposals which "reconnect to nature." As a twist, entrants had to include both educational and recreational elements to their submissions. The entries, which range from a mountain of 'conservation drones' (with a control tower and charging station at its peak) to a collection of four extruded concrete plinths, all seek to explore our relationship with the wild when 50% of the world's population live in urban centres.

See the winning proposals and read the jury's comments after the break. 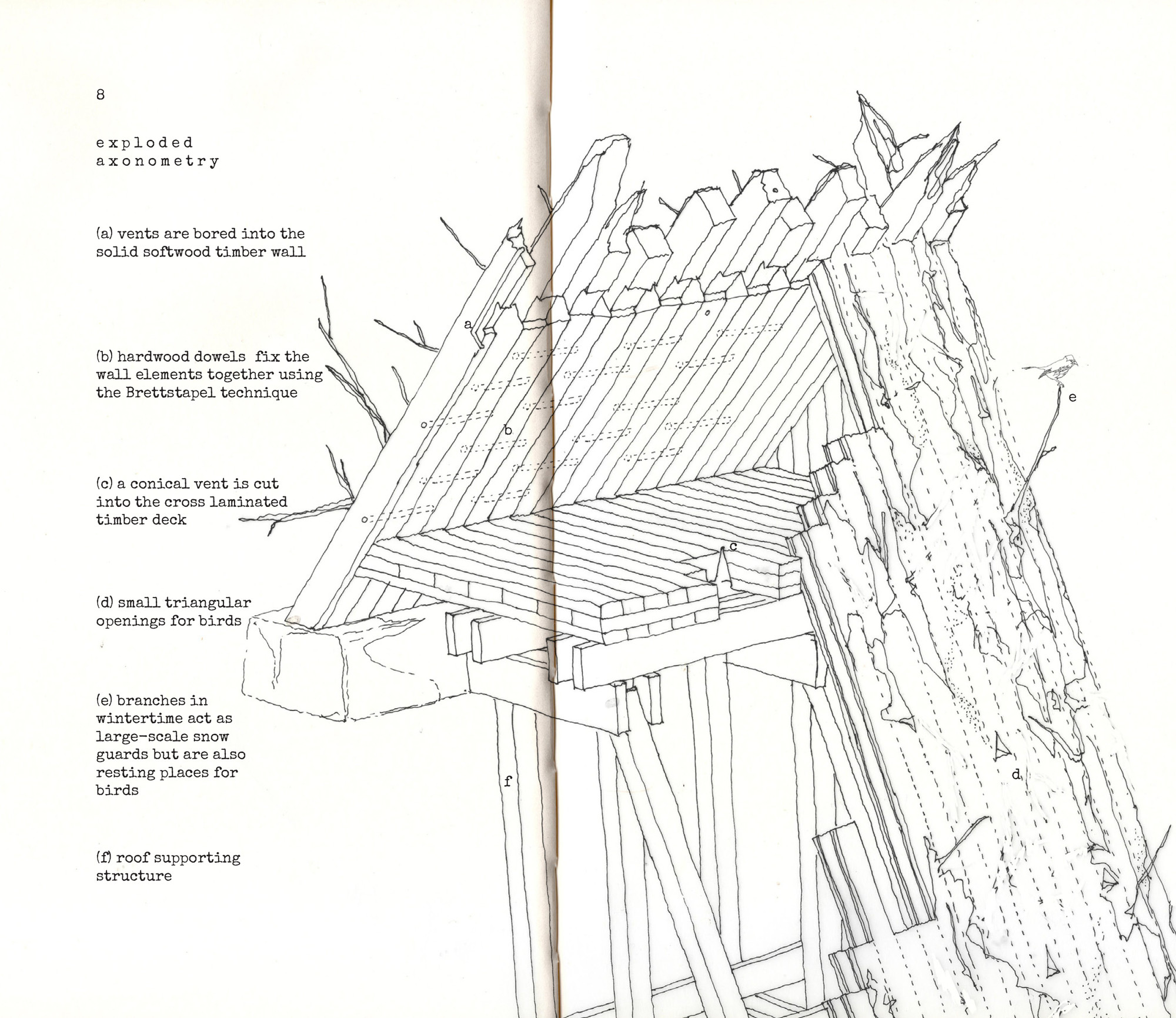 Since the dawn of time, humanity has been dependent on nature to provide us with food and shelter. And even as our civilisation is becoming increasingly advanced, we still rely on nature to provide the basic building blocks: everything we eat is still grown or farmed on earth, and while we have invented and produced a myriad of exotic products, they are all built with materials found in nature.

However, over the last few centuries, people have become increasingly distant from the wild. Before the industrial revolution, only 3% of the world’s population lived in cities. Today – only 250 years later – more than 50% live in urban areas. It represents a physical, as well as a mental, detachment. The majority of the world’s population is no longer connected to nature in the same way as in the past.

This detachment affects both parties: on the one hand, the population living in cities misses out on the positive impact nature has on both mental and physical health – a multitude of scientific articles highlight the benefits of spending time in the green outdoors. On the other hand, when being less involved, people also tend to become less considerate. While humanity’s negative impact on the environment increases, the concern about our planet declines. In the long run, this is a crucial contributor to climate change, affecting the entire planet.

From the jury. Dromneberget is as a statement about humanity’s destructive relationship with the environment, and how we have always given ourselves the liberty of interact with it as we choose. A common theme for bringing public awareness about the environment is to disconnect people from technology in favor of letting them interact with nature in a very hands-on fashion.

This proposal turns that concept on its head and suggests that technology could be the savior rather than the enemy. The proposal responds to the brief with a refreshing touch of science fiction by barring humans from the area as a means of safeguarding nature, suggesting that this future might not be too far away. However, to avoid bordering to dystopia, it proposes that technology could actually be of as much benefit to humans as to the environment.

By offering the possibility of a digital visit, the Omne Mountain becomes a very democratic affair, available for everyone regardless of location. The celebration becomes an act of preservation, and vice versa. Clear diagrams and valid arguments provide a coherent storyline that comes to life in a visually strong presentation, turning Dromneberget into an alluring proposition.

From the jury. The beautiful and distinct presentation style offers a poetic and engaging storyline about approaching nature and becoming a part of it. While always being centered on the environment, the concept also makes sure to keep the basic needs of the human visitor in mind. Retreat/Shelter/Nest is responding to the brief on an emotional level as well as a technical one – the shelters are designed to intrude as little as possible on the flora and fauna, with a clear structural approach that effortlessly adapts to the changing landscape of Omne Mountain. By inviting nature itself to interact with the structures, Retreat/Shelter/Nest offers humans a unique first-hand experience of the wild, equally appealing throughout the seasonal cycles.

From the jury. Rather than trying to embody every aspect of the brief within the architecture, Inside Outside leaves both the educational and recreational aspects of the brief to nature itself. By offering simple and flexible lodging structures that over time will merge with their surroundings, the proposal invites people to experience the High Coast on nature’s terms. The straightforwardness of both design and presentation creates a simple but enticing invitation to immerse yourself in the flora and fauna of the High Coast: a proposal that provides an intuitive approach to nature with minimum interference and maximum longevity.

Honourable Mention: Back to the Future / Silvia Marcialis and Alessandra Mattacchioni

From the jury. A poetic project that celebrates nature by placing a series of monuments on the site. With each structure offering a unique way of experiencing the elements of nature, the educational aspect is addressed in an ingenious way. Despite their size, the simple design of the four buildings makes them feel very much at home in the area, and the sensitive presentation furthers the idea of a concept that offers visitors an educational as well as an emotional experience.

From the jury. By choosing a structural concept associated to childhood memories, the proposal adds a playful twist to the more serious matter of reconnecting man with nature. Convincingly presented as a year-round destination, the balanced mix of learning and outdoor activities offers an enticing experience for people of all ages.

From the jury. Omne Mountain Camp seeks to counter the negative aspects of people leaving the countryside in favor of cities by proposing a camping community that is of equal benefit regardless if you live in an urban (experiential) or rural (economic) area. The approach of setting up a base camp allows for a communal feel while the dwelling units scattered throughout the area allows for more privacy. The use of different pods for different seasons guarantees a unique visit every time. The detailed diagrams and drawings bring the concept together into a very well-advised and consistent project.

Previous Combo Competitions have included the London Cinema Challenge and Faith! A Place of Worship in London.

Combo Competitions: Emphasis On The Idea