"Now is the time for us to create a new interface with the deep sea, the earth’s final frontier," says a brochure from Japanese development company Shimizu Corporation, presenting their outlandish proposal for the Ocean Spiral: a deep sea colony that can supposedly provide for up to 5,000 people in its 500m wide tethered sphere.

The proposal describes the Ocean Spiral as "safer and more comfortable" than existing land-based cities, thanks to the near constant temperature enabled by the ocean, the fact that it will be unaffected by typhoons or earthquakes, and the hope that the city's methods of oxygen generation will enable higher concentrations of oxygen then are found in the Earth's atmosphere. 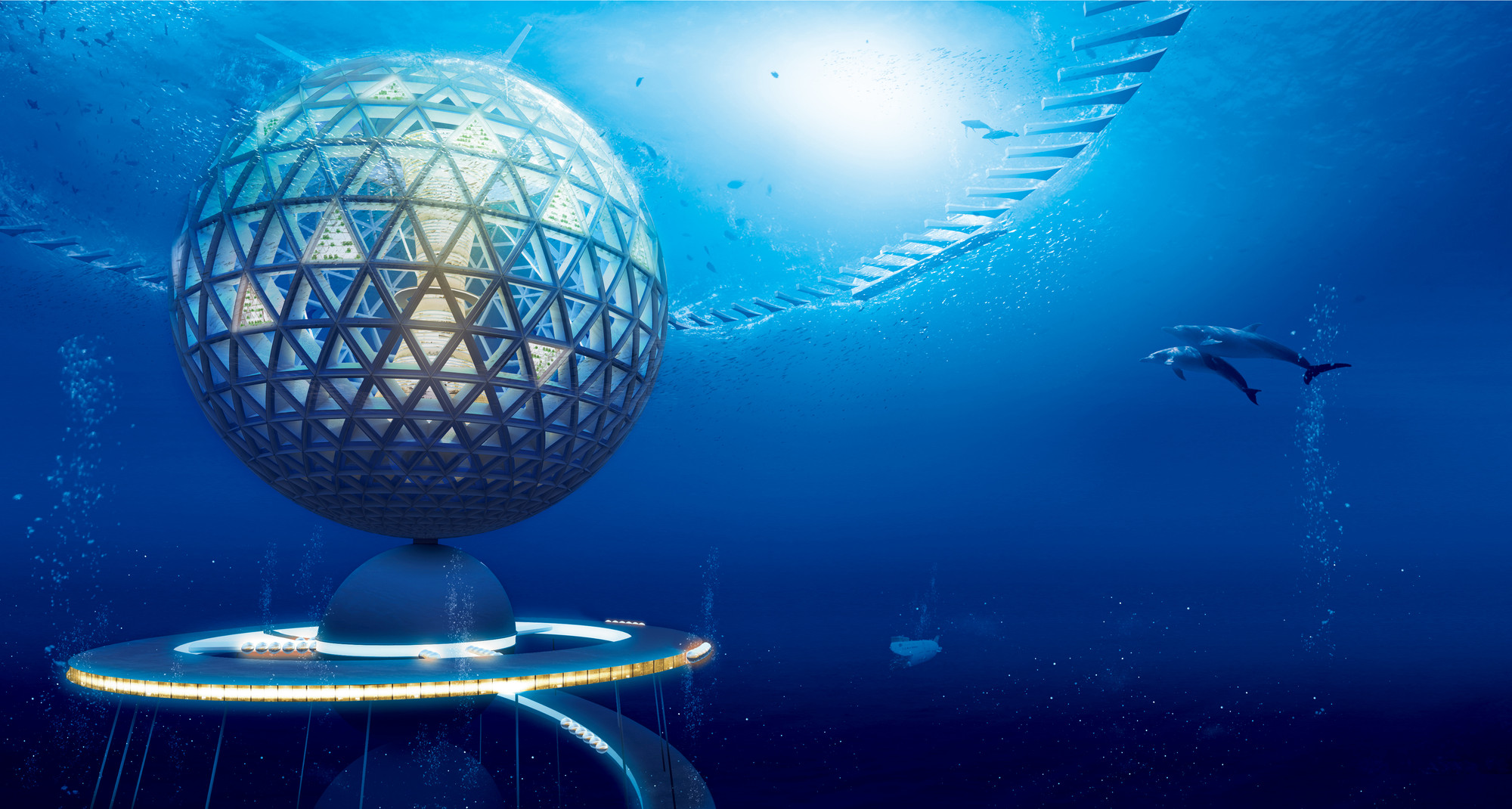 As a settlement, Ocean Spiral will reportedly support itself by tapping into what Shimizu Corporation frequently refers to as the "unlimited potential" of the deep sea, providing food through fisheries, energy through the thermal currents of the ocean, and desalinated ocean water for drinking. In addition, the plan provides opportunities to learn more about the deep sea environment with a sea bed research facility, from which the entire structure is anchored.

Inside the sphere, a gigantic central column provides most of the city's accommodation, hosting - from top to bottom - hotel, retail & convention facilities; a family residential zone; offices; apartments and, at the bottom of the sphere, research facilities and laboratories for the study of the deep sea. The areas around this column are largely reserved for public spaces, where residents can gaze out at the sea beyond.

It may sound like something directly from a sci-fi film, but according to Shimizu this proposal is not simply hypothetical. They even have support from the Japan Agency for Marine-Earth Science and Technology (JAMSTEC), who say:

"Current social trends and issues point to the urgent need to promote maritime innovations in areas ranging from the use of marine resources to the deployment of marine biotechnology, not to mention the need to advance our understanding of the sea and earth. When we heard of Shimizu Corporation’s concept for a deep sea city of the future, one designed to serve as a new interface between humanity and the deep sea, we felt confident Shimizu would find our research findings useful... we are fully committed to joint efforts to improve the technological efficacy and feasibility of the Ocean Spiral project."

This is not to say that the construction of the Ocean Spiral will be easy. Occasional excerpts from the brochure reveal the tremendous challenges which still need to be overcome, such as the following matter-of-fact gem:

"Major technological challenges for the future: Building a sphere with triangular acrylic sheets measuring 50 meters on a side."

Later on, the brochure also mentions that these acrylic sheets will need to be 3 meters thick to withstand the water pressure, with additional support from glass-fiber reinforced plastic ribs, all embedded within the colossal concrete structure.

The proposal for Ocean Spiral is certainly an intriguing one, and the brochure does go into some detail on how challenges might be resolved. However, Shimizu Corporation has form in this area, with no fewer than eight other futuristic city concepts released in previous years, including lunar bases, floating pyramids and eco-islands.

With so many of these challenges to overcome, and little track record of delivering on their most ambitious projects, it is perhaps more likely that Ocean Spiral will suffer the same fate as Shimizu Corporation's other futuristic proposals.