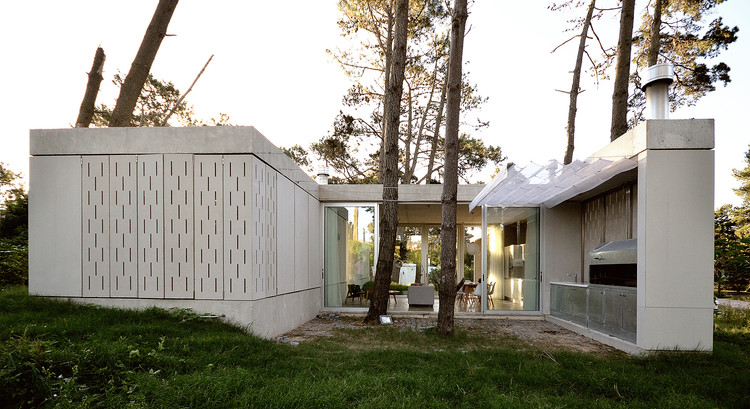 Text description provided by the architects. Which are the limits of the traditional housing protocol? The project is a specialized mediation mechanism between the ideas and the built reality.

Adaptability is searched in a realistic path, without sacrificing necessary explorations, not as an emulation of flexibility, but as a neutral inhabit platform. Multiple appropriations, rather than an options menu. Assuming an array of predictions for an undefined user seems an infertile path. Consequently, the disposition of inhabitable spaces can establish specific uses, as well as integrate or fuse with the exterior built spaces, circulations and green areas. This vectors suggest expansion possibilities according to the interests of the diverse inhabitants. The composition logic allows, in all cases, to increase the buildable space, from the public areas to the private space and in correspondence with the free terrain.

Such a concept poses a unique bond with the building’s environment, not as an unalterable guest, but as an act of construction. While the site welcomes us, the environment happens in terms of new topologies. The general configuration receives meaning and essence from the site itself. Two cement paneled heavy solids, embrace the micro pine forest, creating an in-between transparency that behaves as the main public space of the house.

Its section takes advantage of the topography, avoiding any kind of mimesis. The eastern exterior solid, has an elevation of 3.00m; meanwhile, as the land rises, an intimate space of 2.40m is provided for private rooms. In spite of this subtle vibration, the upper boundary remains imperturbable, allowing the continuity of the interior spaces by the shapes and textures.

Its asymmetric "H" typology outlines two outdoor patios, overlooked by the rooms, providing a big relation space. Meanwhile, the topography invades its surface, blurring the boundary between a projected exterior and a natural outside. A deploying inhabitable device takes the intimate life to the nature, and incorporates the ambient domain to its interior.

The dialog with the climate component is possible, owing to the Parti and implantation. Its sustainability appears not as a technological boast, but as design sobriety. The sunlight scans the bedrooms and collective areas in a balanced way. The opacity – transparency dialog of the sunlit facades is boosted by the patio system.

The non-compact Parti generates more area of vertical surfaces. Consequently, the perforated-ventilated façade generates a passive conditioning system, sensitive to orientation. Likewise, its versatility and piercing allow generating a conceptual solid. The material dimension of the piece allows to absorb the time passage. Its tectonic condition is not worn out by time; on the contrary, it is embellished. Its practical consequences are: durability and close-to-zero maintenance.

From a space phenomenology perspective, its sensible perforations constitute a haptic quality regarding air quality and light. From the inside, a series of perforations as a veil, reveal nuanced landscape dynamics. From the outside, they generate a cloak that both hides and shows a serene, stressed out domestic activity.

Light used as a material, idea as shape, gravity as reference. SIMPLICITY AND PRECISION. A nude, intelligent, ESSENTIAL beauty