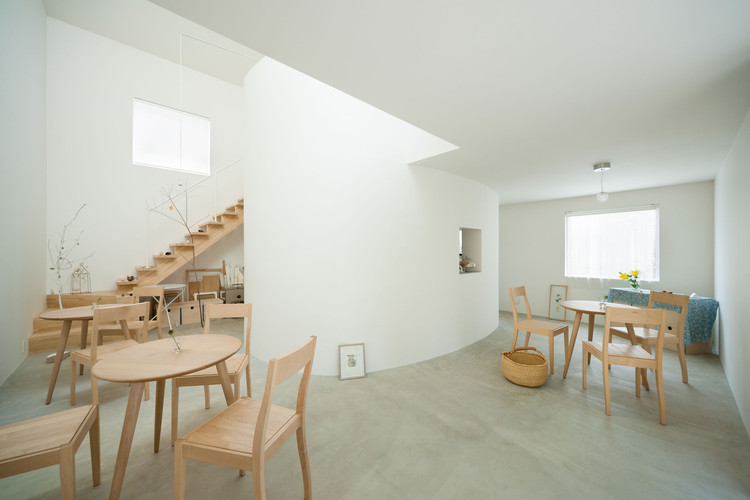 Text description provided by the architects. There are several relatively large parks in Musashino, Tokyo and this small building was built in front of one of them - Nogawa Park. The owners are a young married couple in their 20s. Both of them art graduates who have jobs in companies where they are able to demonstrate their artistic senses and creative skills. They dreamed of having a building like a "small art museum". They also wished for a gallery, a café, and a studio on the first floor, as well as a small living space on the second floor.

They felt that they didn’t just need a dwelling for two people, but also a place for the community.

Considering this, it was important to provide a space with as much flexibility as possible, so that the first floor could fulfill a variety of roles. To this end, the idea came to mind of loosely and fluidly exploring the depths and relationships of the space, rather than separating each individual room with walls.

More specifically, this meant creating an oval space accommodating the kitchen and toilet areas, placed in the center of a space which base shape is a simple square. With regards to the area set aside for the gallery, café, and studio, the oval is slightly distorted due to the amount of space necessary for the kitchen and toilet, as well as being slightly shifted from the center.

With this distorted oval, the gallery and the café are loosely divided, building a relationship which stimulates each space. At the same time, the studio is located in a private relaxing space away from the other areas.

Moving up, we see a second floor which is half the size of the first floor, containing a simple shower unit in the bedroom. The first floor's atrium can be seen from the inner balcony on the second floor, so any visitors coming from the park can be welcomed without delay.

After the building was completed, the couple took one year getting things ready before opening for business. Currently, the locals know the building as the “happy café”, which is only open on Sundays. The gallery, however, is apparently not yet ready to open. It will be interesting to see how the "Little Art Museum", which sits quietly in front of Nogawa Park, develops over the time.