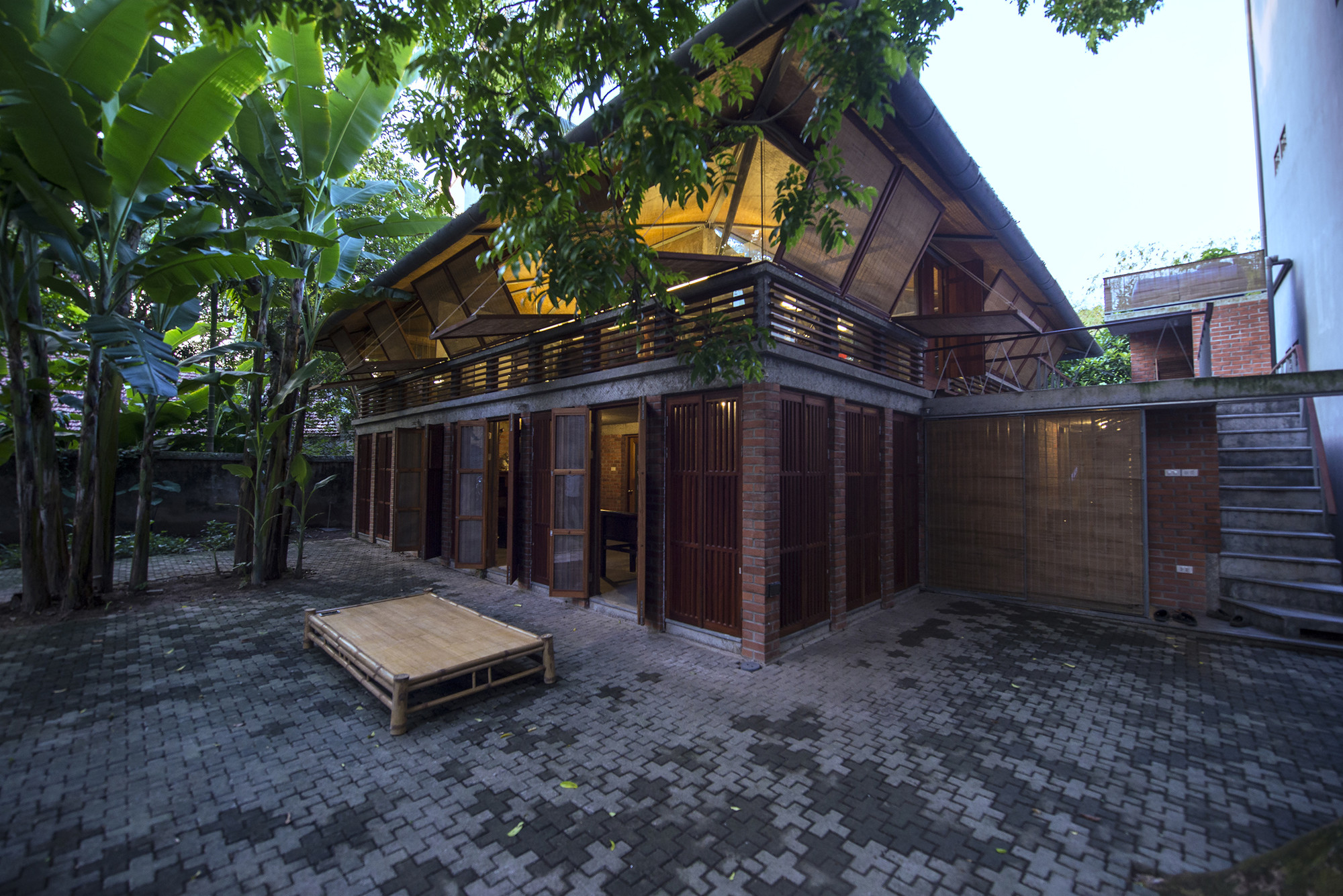 Text description provided by the architects. Human these days is living in a world where the globalization is rapidly developing in extremely diverse and complicated aspects, driving the earth to go far away from its original balance. The earth, in terms of sustainability, primarily has an ecology and biodiversity in which everything is organically connected to everything and all living things share key characteristics. All known organisms share certain general properties, and to a large degree these properties define what we mean by life.

The lesson of ecology is that nature’s form is a direct response to capturing the flow of energies and materials that reside within that bioregion. The huge diversity in natural forms teaches us that there are many ways, many forms, to capture and use available energy. The form itself, made up of biological processes, maximizes the use and storage of energy and materials for its needs and functions within its ecological and energy location.

The ecological model is powered by energy and resources resident to the site and bioregion. Ecology is place-based, connecting form and biological function as a system. When this kind of systems thinking is applied to architectural design, it suggests that the design acts as the collector and concentrator of those resident energies and resources. The connection, collection, and concentration of these energies can provide comfort, value, and delight. Sustainable design accomplishes the most with the least energy consumption and in a connected and comprehensive manner.

All organisms modify their environment, and humans are no exception. As the human population has grown and the power of technology has expanded, the scope and nature of this modification has changed drastically. Many ecosystems are dominated directly by humanity, and no ecosystem on Earth’s surface is free of pervasive human influence. Our activities are causing rapid, novel, and substantial changes to Earth’s ecosystems. By these and other standards, it is clear that we live on a human-dominated planet.

The global consequences of human activity are not something to face in the future, they are with us now. All of these changes are ongoing, and in many cases accelerating; many of them were entrained long before their importance was recognized. The rates, scales, kinds, and combinations of changes occurring now are fundamentally different from those at any other time in history; we are changing Earth more rapidly than we are understanding it. Humanity’s dominance of Earth means that we cannot escape responsibility for managing the planet.

In terms of sustainable architecture design, architects play a very important role in conservation of environment, creating climate adaptive buildings that express great respects to the surrounding environment, operating within appropriate microclimate in which every existing thing on the site is equally valuable element, from trees to living species, all should be carefully considered. This design focused on one word – Light. The word Light is used due to its diverse meanings.

Firstly, Light is simply of the most important factors on our planet as well as in architecture design. Daylight and architecture are inherently connected. Throughout the history of architecture, daylight has played an invaluable role in the lighting of buildings. Daylight is essential – not only for vision, but also for the effects on people working in, living or experiencing the built environment.

The focus on daylight in architecture is high and rising. In this respect, Ngoc Luong Le Architect wants to play a role by contributing and stimulating issues that lead to better living environments. As an architect of sustainability, it is important for him constantly to seek and strengthen the relevance of light in architecture. He would like to enhance and encourage the role of daylight in design prioritizing. Ngoc also stressed that ‘the careful control of distribution and directionality of light is a most powerful tool in defining and revealing the limits of space’.

The experience of the four elements in Asian natural science of Feng Shui, literally translates as "wind-water" in English, which consists largely of genuine natural materials: water, earth, wood, metal; and derived from them light, and temperature is a central part of Ngoc’s design. He said ‘the effects of light through window openings have been a tool to the architect throughout history. Few elements in a building are as vitally important to its functional success as the window. Architecture must fulfil visual as well as and biological needs with windows – in a way that gives us full control over how light and heat are admitted into a building and over the view we have out of that building’.

Ngoc has also stressed that the need for a reduction in the use of energy in buildings; where the part played by a strategic role for daylighting can provide considerable savings in energy, and therefore of carbon dioxide emissions, leading to a reduction in greenhouse gases and ultimately a reduction in global warming. It will be found that in this design, daylight has provided the necessary amount of light for large parts of the building during the day, whilst providing the interior space with an overall impression of daylight, even in areas where the actual daylight factors may be relatively low, allowing light from artificial sources to be reduced, with consequent savings in energy.

Secondly, Light also means lightweight structures. Any structure designed intelligently and responsibly aspires to be ‘as light as possible’. Its function is to support ‘live loads’. The dead loads of the structure itself are a necessary evil. The smaller the ratio between a structure’s dead load and the supported live loads, the ‘lighter’ the structure. From an ecological, social and cultural perspective lightweight structures have never been more contemporary and necessary than today. This house was built using light structure with less use of concrete and more use of light structural systems, for example bamboo and steel systems, saving materials as much as possible by minimizing decorative elements that could lead to waste of time and money.

Thirdly, Ngoc Architect said that he was pretty much impressed by Australian architect Glenn Murcutt’s design philosophy in which humans should be touching the Earth lightly. The word Light means a lightly and gently behavior of humans to the Earth. This explains why the house was named Gentle House. This was also exactly the way vernacular Vietnamese architecture was originated alongside Vietnamese culture with huge respects on the nature and on the relationships between humans and the environment.

According to Ngoc, his purpose is to ‘create living spaces, which are not only efficient, comfortable, and energy saving, but also inspire inhabitants and make them to be aware of and to take care of the nature’. In his designs, he does not try to achieve the uniqueness by making the buildings look different to others but by creating uniqueness in setting environment itself. Each design solution should be tailored for a particular setting. He tries to lightly put the built object in that setting in a way that least impacts to the nature in which living things are able to live together.

We perceive that architecture is to serve for the living of human in the harmonious relationship with the nature. Architecture is not a tool to express human’s power and their domination over the nature, instead, it is to behave gently with everything in all aspects.

Hanoi capital is an ancient city with thousand year’s history formed and developed from traditional villages. With rapid and complicated urbanization in the area, the original landscape of those villages has seriously deformed and distorted. The project located in a village in Hanoi’s suburb.

Inspired by Vietnamese traditional house which is often small in terms of sizes and dimensions but multifunctional and highly flexible, the gentle house has only two storeys in height. All the existing trees on site are maintained. The geometry of the building is deeply studied to harmonize with the ecological system and all living species. The ground floor is for family’s living including a central room, three bedrooms, a family space and a kitchen. The central mainly used for worshiping whereas all daily activities happen on the outside front yard. The upper floor is architectural studio opens 360 degree views to the outside with a study room in central.

The house is built by custom aterra-cotta brick, with plain concrete slab and column finishes which are shaped by bamboo formwork. All wooden doors and windows are not painted. The bamboo curtains and ceiling finishes are made by traditional method. The steel structure of the roof is inspired by the structure of banana leaf in the garden that is large overhang with no column supported.

The facade of the gentle house consists of 36 sets of wooden doors inspired by "thuong song ha ban" traditional door. This adjustable door with two sliable wooden louvers can totally open or close based on the need of usage and the change of the climate. When all doors are opened, the inside space can become veranda. The curtain wall on upper floor inspired by traditional bamboo blind. All bamboo curtain can be flexibly opened, light therefore penetrates deeply into the building. The curtain wall and cooling system on the roof create a comfortable atmosphere for occupiers.  Air-conditioning is total free in the building.

Like other traditional architecture around the world, Vietnamese architecture also uses the method of golden scale. However the origin unit is based on the little finger node of house's owner. It creates uniqueness in terms of scale and proportion for each house.

The door and curtain wall system can be controlled in the respond to the sun, wind, light and view. We work and feel the level of solar radiant through the penetration of the natural light. We respond to the summer heat by operating the water spray system, using grey water to cool down the roof.

The gentle house is designed in an attempt for occupiers to learn from and live passively with nature.  Living in and learning from nature help us a lot in our practices for the future. 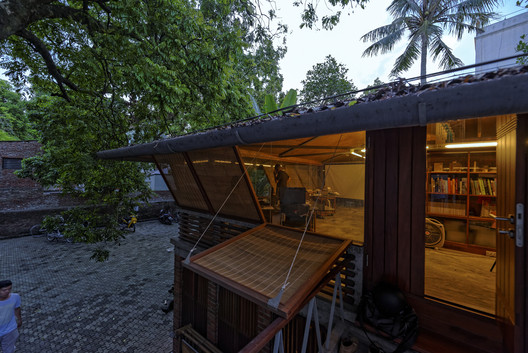