Mikolai Adamus has shared with us his proposal for a “New Aquarium” to activate the Southern Pier in Gdynia, Poland. Using the golden ratio and the Fibonacci sequence to guide the design, the rectangular structure burrows into the pier, becoming secondary to the surrounding landscape. As Adamus describes, the aquarium is designed to transparent and “a place where architecture is subordinated to function, devoid of unnecessary detail.” More details, after the break. 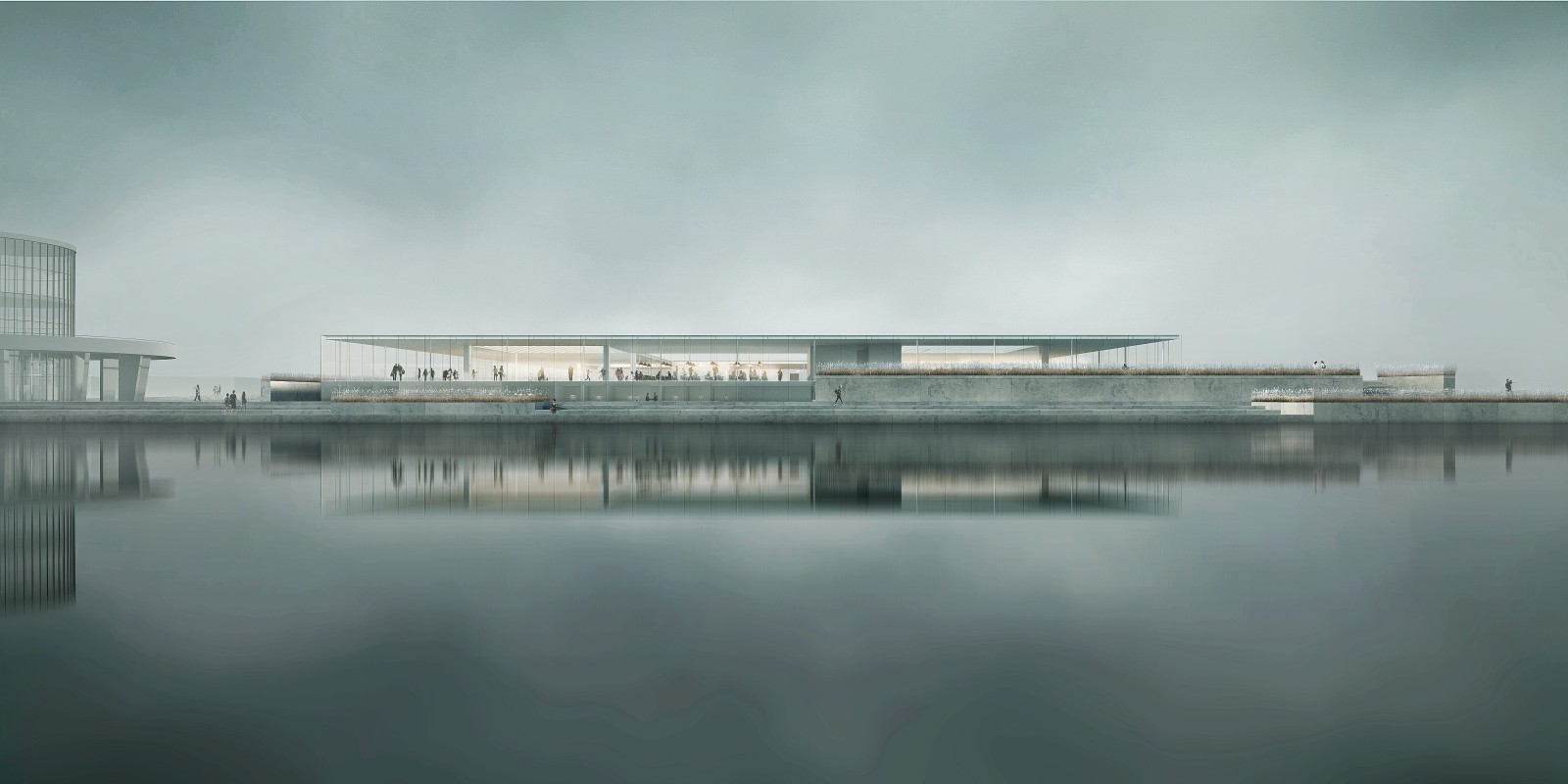 From the designer: The main emphasis of the design is not so much the creation of a building, but an attempt to generate a place. The South Pier is an area of unique character. Its farthest point is definitely the most important part. The local land use plan assumes that the end of the pier should remain without buildings. Nevertheless, the question arises of how to make people more keen to pass time at this location.

A Building for the Square

Apart from strengthening the identity of the place, there is also a need to activate the pier end and create attractions, which will draw more people there. It is, however, certainly not a place for an iconic building, but for a very plain building that will not draw attention away from the surrounding sea and landscape. It is a place where architecture is subordinated to function, devoid of unnecessary detail. This is because, in this place, people, their interactions and their surroundings are of paramount importance.

The proposed construction consists of four main interdependent parts: the elevation, the part above the square, the roof and the part below the square. It is only the juxtaposition of these elements that enables the full potential of this location to be realized.

The elevation: The pier end will be elevated by 2 meters above its current height. The square itself will only be raised to the height required so as to be able to see the view at the end of the South Pier and so as to provide a destination towards which to walk.

The roof: This constitutes an additional viewing terrace. It is another type of raised square, this time uncovered, which enables an extensive view to be surveyed, for example during the regattas that frequently take place in Gdynia.

The part below the square: Elevating the square provides the chance to create features in this place, which could attract new users to the end of the pier and also interest users, who have already reached it.

Achievement of the greatest possible transparency was the most goal. The idea was for the user inside to feel sheltered from the weather in the square. However, the building was to present the smallest possible barrier to an observer outside looking at the views. At night, the glass elevations of the building would act as a lamp illuminating the surroundings.

Apart from transparency, flexibility constituted a second aspect for the upper part of the building. During normal use, the building should be as transparent as possible, but it should have the facilities required for the organization of various types of special events, such as lectures, exhibitions or banquets.

The Aquarium on the South Pier is an obligatory stop for every tourist and school trip to Gdynia. The management of the oceanarium have started to consider extending the building so as to introduce new attractions. It is however time to give thought to the question of whether to extend a building that does not fully satisfy the requirements of a modern oceanarium, or whether to construct a new building with a structure and attractions that match those of others in Europe.

Fibonacci and the Golden Ratio

When designing the building, I attempted to use the golden ratio and the Fibonacci sequence in order to create compositional lines to define the fundamental geometrical expression of my building. I used these proportions to create the axis and elevation of the building. This seemed to be even more appropriate given the links between the function of the building and nature. Interestingly, Fibonacci’s spiral occurs in nature, in galaxy formations, shapes of hurricanes, shells and also in plants. Spiral lines can be seen in many plants. For example, the fruit of the pineapple shows eight such lines running in one direction and five or thirteen lines in the opposite direction.