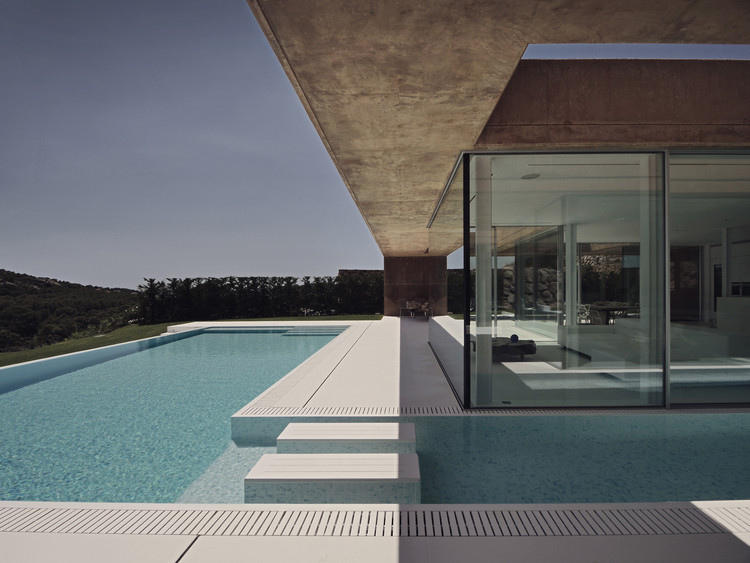 Text description provided by the architects. Aiguablava is a small beach on the Catalonian Costa Brava, embraced by low mountains, where houses overlook the sea between the pine tree forests.

In the top of a completely flat plot, our clients purchased a construction. They called me to ask if I could help them to adapt the existing house to their real needs. I was a little disappointed, since I had been looking for a plot to build a new house and had all my enthusiasm put into this project. I asked them why they had bought a house that did not fit at all the description of what they wanted. They said it was the only flat plot they could find and the views were wonderful.

The original house, ground floor and basement, had a facade facing the sea, formed by a perimeter wall construction, with many small windows and a very fragmented distribution.

They said “We want to look at the sea! The best of this house is the view, but when we are inside, we can hardly appreciate it. We also want big spaces; we do not need so many rooms”.

From there, what started as a small project became a major intervention. The plan form of the house was already defined, because the maximum of allowed construction was built, so we decided to respect the perimeter in order to keep the original structure.

On the ground floor, we decided to keep only the spaces of public use and the master bedroom; the other rooms would be located at the basement, where we faced lack of light problems and the spatial quality of the rooms. To remediate it we projected two small courtyards in the front and back of the house that allowed us to open large windows and build three bedrooms.

Once we solved the rooms problem, we had to open the ground floor tearing down the walls to make it into a single, large space, with only a sliding gate to separate the main bedroom by night.

We decided to keep the perimeter of the façade but replace the wall with glass work in a single skin that ran through all the front façade. In this way, we got a panoramic view from everywhere, which in turn is filtered by the innumerable reflections of the crystals, giving a different perception from every angle.

Finally, to solve the problem of direct sunlight exposure through the windows, we projected a concrete pergola of more than 30 meters span, without any intermediate support, that allowed us to create livable and protected interstices where people could meet and eat on summer days.