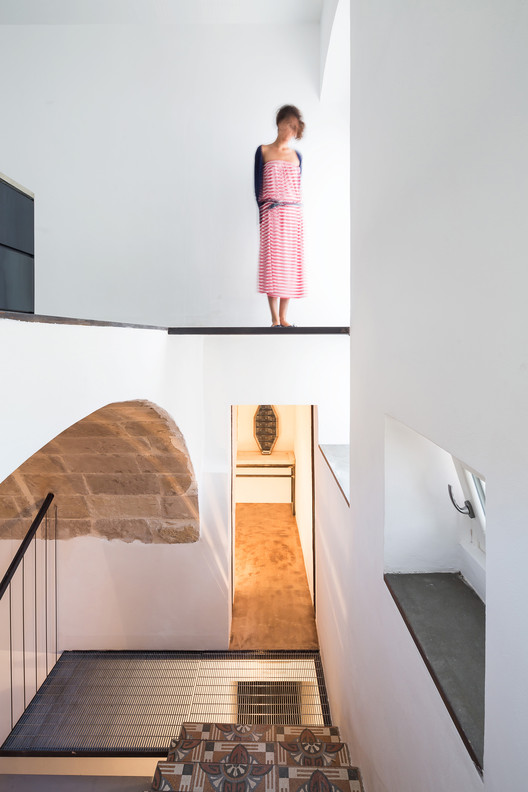 Text description provided by the architects. The closely-knit urban fabric of the upper section of the oldest part of Ragusa has a clear 19th-century feel, with longitudinal streets running parallel at different levels, following the natural slope of the land and tied together by a criss-cross of steps.

The current sequence of buildings is the result of combining or subdividing properties and sometimes even modifying the old connections between levels, which once tended to be divided between the ground floor production areas and the upper floor lodgings.

Our project is about the renovation of a portion of the fabric originally used for the production and sale of the traditional cheese. Over the years, the building has been transformed and modified several times.

The solution adopted was to create a central courtyard by removing a volume from the section of the building.

Such a decision reduces the living space but brings considerable benefits and allows an optimal reorganization of the spaces, making the new void the heart of the building.

After the renovation, each room faces the new courtyard on the southern side; the house is closed on itself, ensuring more privacy and distance from the neighborhood.

Thanks to the natural ventilation, the courtyard acts as a chimney and  contributes to the power performance of the entire building.

The new courtyard, and the arrangements of the vertical connections with the north acts like a buffer between the façade (more cold and damp in the winter) and the main spaces.

The courtyard, that became the new entrance of the house, crystallizes an attitude that sees rigorous composition as the best way to combine conservation and innovation. After all, a courtyard is an element taken from a well-established building tradition.

The interiors are marked by a careful balance between the re-use of traditional materials and contemporary elements such as interior doors, fencing and tiles that were removed and reassembled in a modern atmosphere.

The original tanks used for the brine cheese and located in the basement, are re-used as cisterns where rainwater gathered and is also used  for  the sanitary system and irrigation the  plants of the courtyard.