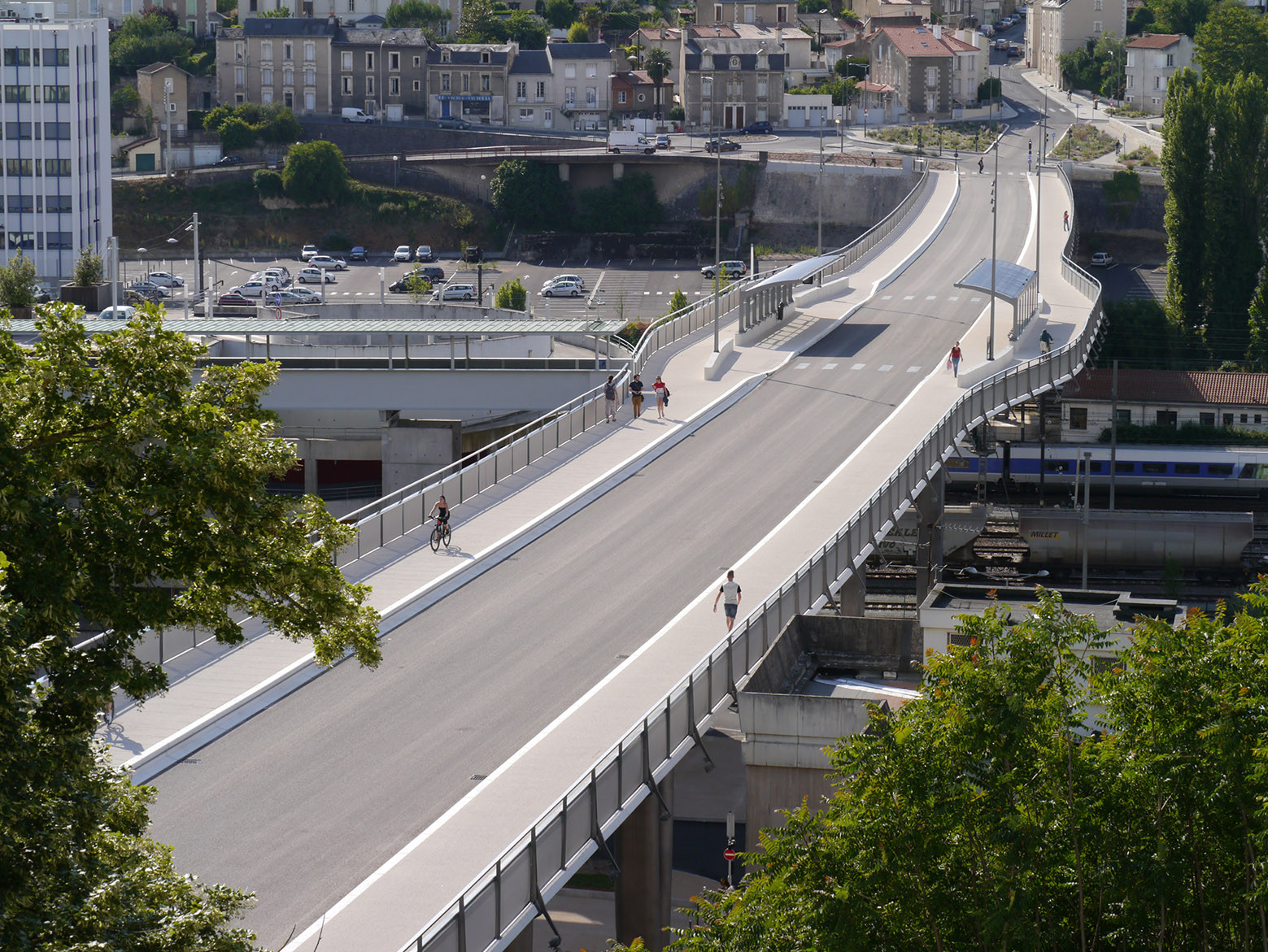 Text description provided by the architects. The Léon Blum Viaduct spans over a large high speed rail station and the Boivre river valley running through the center of Poitiers. The project is to create a line in the urban landscape of Poitiers connecting the historic city to the east and the new suburban landscape to the west by bridging the once industrial center and train station along the Boivre River at the base of the valley.

The bridge is a project of urban renewal, aligned with the recently constructed Theater in the eastern historic center. In addition, the project of the crossing, which replaces a pedestrian-only structure, incorporates a BRT bus network (Bus Rapid Transit). The new bridge therefore plays strategic role for the city development at a larger scale.

The viaduct accommodates 2 lanes of BRT bus and 2 pedestrian walkways of 3 m on each side of the deck.

The design consists of a unique 310 meters long semi-Vierendeel steel decked truss. It is divided into 5 spans: (24+81+81+81+43), the main one reaching 81 meters. In plan, the bridge is designed as a uniform curve with a constant radius of R=2469 meters and a longitudinal slope of 2.8% increasing from West to East abutment.

RFR acted as Architect and Engineer for this winning design-build competition entry.

The urban and functional requirements, on the one hand, and the fabrication and erection constraints, on the other hand, defined the architectural and technical response.

Three main objectives result from this:

- Simplicity of the general aspect of the bridge within the site.

- A fine articulation and scale with respect to the town.

- An erection procedure which is compatible with the built context and opportunities of the site.

We have chosen to create a structural continuity between the bridge deck and its vertical supports which are articulated at their base. In doing so, the area of the bridge which is most directly in contact with the town is freed from the kind of massive support commonly associated with this type of Bridge. This approach contributes to the integration of the Bridge within a constrained urban condition notably to either side of the Grand Cerf Boulevard.

The viaduct it’s an infrastructure well integrated in its landscape and within the city.

By complying with current urban needs, and offering a new possibility for public transportation, it renews the city and valley landscape, as well as the memory of the previous existing footbridge, without disruption.

The bridge design integrates all civil engineering requirements for such a structure, as well as, all technical constraints, including railway restrictions, and the complex construction site, but avoids the appearance of a typical road infrastructure.

The extensive studies carried out during detail design stage allowed to design a viaduct in full conformity and coherence with the initial conceptual vision. During this design process, the sections of the structural components have been optimized and refined to emphasize the slenderness of the architectural composition.

In order to reduce the ecological impact and to minimize the financial costs, the structure of the project has been developed from well-known state of the art economic and reliable erection and construction techniques and processes. This led to the design of a “structural lace”, composed by a series of clearly organized and hierarchized structural components that provide an answer to the structural needs and generate an open filigree structure blending gently in the city fabric.

The deck of the viaduct has a hybrid structure composed by a concrete slab and a steel lattice. Its height and width vary geometrically and behave structurally as an open girder box. The piers of the viaduct set accordingly to the urban fabric are structurally fully fixed at their top and moment free connected at their bottom. The structural built up profiles and boxes are made of welded laminated steel plates. The deck and the lateral edge “shells” are made of white concrete.

By daytime, the friendly design of the bridge is absorbing, filtering and reflecting its own environment. By night time, the viaduct is fully revealing itself, echoing the light emanating from the theater and displaying its own focus towards it, establishing thus a dialog between these two constructions which are symbolizing the dynamism of the city.

The lighting principles are emphasizing the horizontality and the slenderness of the viaduct by a linear and continuous display of the significant architectural components, and more especially the bottom chord of the structure to reveal and emphasize its geometry.

The lighting scheme is emphasizing the materiality and the different surface aspects of the viaduct that are revealed but not the lighting devices themselves that are integrated and disappearing into the overall architecture. RFR developed a special lighting system, with articulated “arms” integrated in the handrail design, which can be rotated to facilitate access for maintenance. 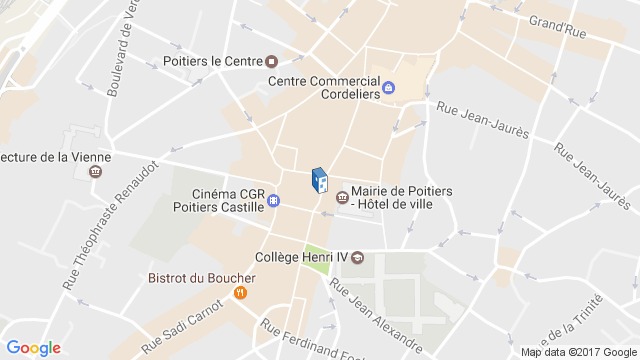