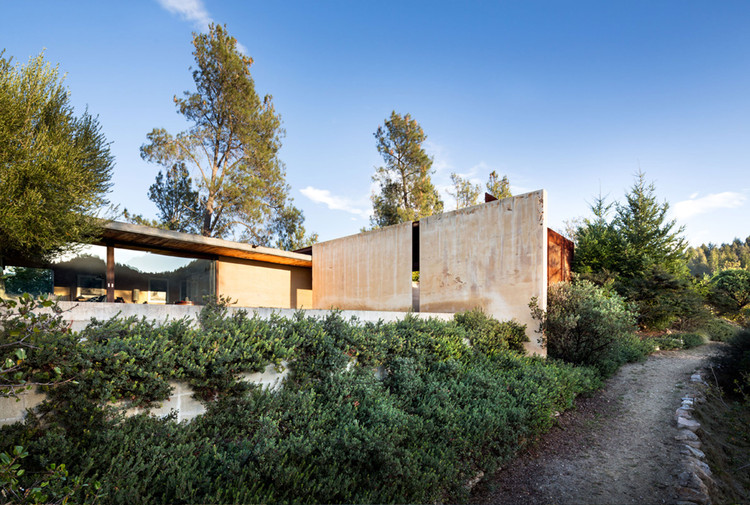 Text description provided by the architects. The Napa Valley House was designed by one of our partners, Eliot Lee, along with his wife, who is also an architect, for Eliot’s parents, and is located in the hills of Napa Valley, California. It occupies a ridge site that had not previously been built on and was very rocky.

Instead of blasting away the ridge to create a flat site, they worked with the topography, letting it guide the design. The “house” is actually a compound of four buildings that sit in a row between two hills. One is a living/dining space, one is a master bedroom and bath, one is a guest house, and one is a spa with a sauna.

The separate buildings are united by a series of intersecting orthogonal paths and a rammed earth wall, which also extend into the landscape and incorporate other elements, such as the pool, into the property. Most of the original flora was preserved; larger trees were temporarily moved elsewhere on the site and then replanted. Additional plantings were added, though all the plants are native species such as tanoaks, madrones, and manzanitas.

A small amount of stone was excavated, though none was actually removed from the property; it was either used for the walls or crushed for the paths.

The pool was designed as a lap pool with a wading pool (for children and for adults to relax) at one end. The other end features an art piece by Brooklyn artist Peter Lane. The overall philosophy of both the construction process and the final design was to step lightly on the existing landscape.

Living on the property means that you are brought into nature simply to pass from one space to another, and the outdoor yards, terraces, pool, and gardens result in more time spent outdoors than inside. 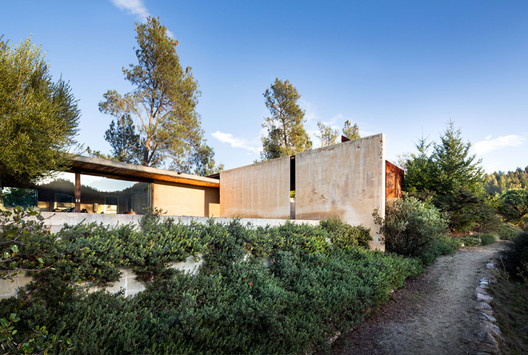