Save
HSM House / SO Architecture 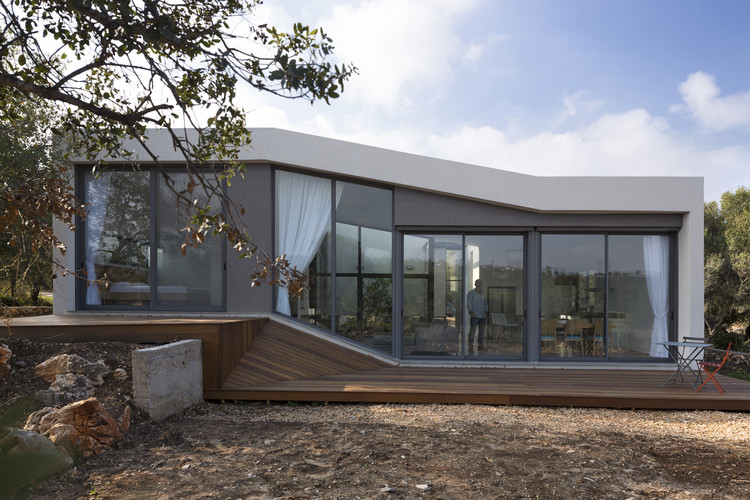 Text description provided by the architects. HSM family house was built in kibbutz Yehiam, where Oded Rozenkier, one of the owners of SO Architecture grew up as a child.This is a one of three houses built by SO Architecture side by side in kibbutz Yehiam. The house was built with a limited budget, using simple building materials in its base - concrete, wood and local stone. It's a house of delicate and well thought architectural touches, unique perspectives, putting to use the calm beauty of the given lot which includes a moderate slope and a view towards a natural oak forest.

The shape of the house towards the street and the other kibbutz houses, is simple and modest, floating slightly, hints yet does not reveal secrets, purposely as to integrate it in the environment and create a house that is consistent with the other community houses. The design complexity unfolds momentarily as one enters the house, revealing diverse views towards the wide open scenery of Yehiam and towards intermediate spatial situations between the different parts of the house.

The plot features a slope along its width, generating height differences of one meter end to end. This rendered as an opportunity to design a structure that follows the natural slope and utilizes it to create functional division between private and public areas throughout the house.The public areas are located at the lower level of the house, and the bedrooms - at the top.

The patio, located near the entrance, is the heart of the house. It organizes the utilities of the house in the space around it, enabling unique relations between private and public, open and closed, built and nature. On the southern end of the patio a floating wall ensures the privacy of the inhabitants towards the street, on the one hand, and enables natural air to pass beneath the children's rooms and ventilate the entire house, on the other.

The patio that centers around a fruit tree serves as a visual point. It filters in daylight that floods the house throughout the day. The tree however, has a major role in shading the window from the southern sun, In addition to giving green touch to the interior of the house, one that fits with its environment. The large northern windows open up to face the view, allowing the inhabitants to enjoy the surrounding nature, without compromising their privacy to the neighbors. This happens in the living room, in the dining room, and in the master bedroom, all of which are directed towards the view.

Through the entire length of the open northern façade, a wide deck is spread. It follows the shape of the house and creates an inviting outside three-dimensional space, as it climbs from the living room to the upper level of the master bedroom.The shape of the deck includes a changing slope that is used as a playground for the children in the family, and acquires plasticity to the look of the house in its facade.

The visual richness introduced by the patio, the house levels and the bare scenery, allow a range of different views and experiences throughout the different parts of the house.The living room, kitchen and dining space, benefit from the juxtaposition between the open view and the inner patio, while the more private spaces in the house enjoy a wide scale of glimpses to the public space and the scenery.