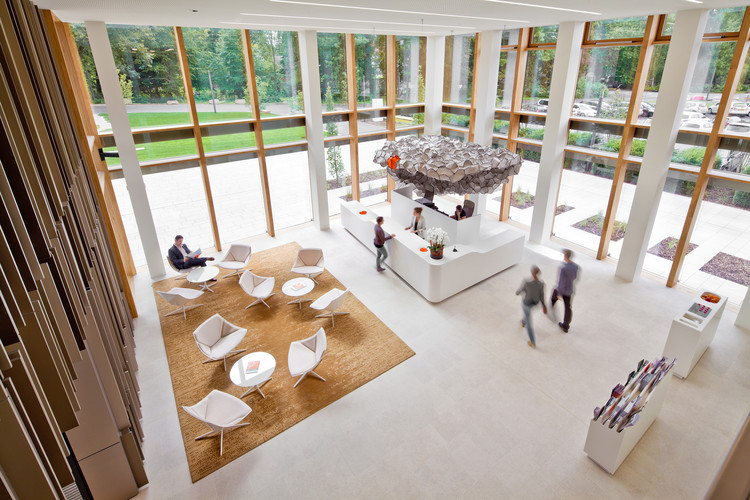 Text description provided by the architects. Between the poles of industry and nature

Where cooling ponds once sent grey wafts of mist across the dismal landscape, where defiant towers reached into the sky and hundreds of ARBED workers arrived to work their shift every day, nature seems to have regained the upper hand. Trees with bright green foliage and straggling hedges overgrow the walls and fences surrounding the abandoned ARBED factory.

In this place, where a local recreational area is implemented for the residents of Esch, Enovos, Luxembourg‘s main energy supplier, has recently settled down: at first sight a large, dark building. Bronze-coloured horizontal lamellas structure the wide façade with a rhythmic pattern. When looking past the entrance, one can still catch a glimpse of the old cooling tower on the left, whose golden brown shade corresponds with the bronze façade. On top of an anthracite-coloured concrete plinth, right next to the new building, one level above the entrance hall, the chapel-like conference building, the former pumping station, sits in an elevated position.

On the opposite side, the former gas turbine workshop has for about ten years accommodated parts of the administration of the Soteg and now the Enovos Company. Its brick façades in reddish earthy tones form an exciting contrast against the newly completed five-storey building, the size and orientation of which express a determined forward direction. The concrete plinth appears like a break, which admits the new and protects the old.

Responsible handling of the environment and a modern working situation

The principle of the group “Energy for today. Caring for tomorrow.” is considered as the aspiration of all Enovos projects and was also incorporated in the implementation of the company headquarters. So all investments have a long-term orientation and focus on saving resources, while employees are regarded as a key success factor deserving modern and pleasant working conditions.

The company headquarters itself should express Enovos’ commitment to innovation and the intelligent use of natural resources. Consequently, the new building complies with nearly-zero energy standards. State-of-the-art technologies including high insulation levels and concrete core activation have been part of the project planning right from the start. Concrete core activation uses the building mass for thermal regulation. At night, the generated surplus heat is cooled with embedded pipelines in the ceiling. The result is a healthy indoor climate.

Not only a pleasant and healthy indoor climate but also a positive working atmosphere is decisive for a successful future orientation: the move to a local recreational area can have a positive effect on the working atmosphere of the staff - especially because the architects working with Jim Clemes and Ingbert Schilz attached great importance to integrating the surrounding nature into the building design. Views across the landscape are possible from every level and convey serenity despite the stress inherent in work.

In Schlassgoart in Esch-sur-Alzette, all conditions were in place to fulfil the specifications: environment, enough space and the necessary willingness of the client to turn rhetoric into action. In the future, all employees of Enovos International, of Enovos Luxembourg, and LEO can jointly work on the common success in one location under excellent conditions.

The first impression conveyed to customers and employees is openness: room for development. The high, open atrium is located in the front part of the building. The prevailing colour white is refracted on the lateral wall by the façade motif: bronze-coloured aluminium lamellas are used to clad the entire wall and give the eye visual support through the technical motif as compared to the airiness of the interior. A cloud-like sculpture structures the spatial volume, while modern seats in bright shades of beige invite people to stay.

On the one hand, two generously glazed walls open up the atrium towards the outside and the surroundings. On the other hand, the atrium describes an inward orientation and merges into the offices and conference rooms on Level 0. So the building entrance describes the outward-oriented will for transparency as well as the inward-oriented will to communicate. This also explains the architects’ interior concept for the single departments.

The basic idea of the “Open Space” were specified with great concern for the needs of employees: as a result, one first comes across a meeting point with a coffee machine and notice board when entering each level, which makes arriving a pleasant experience and aims to promote conversations with colleagues. Small meeting rooms for work groups, which are separated from the surrounding office areas with only three walls, allow spontaneous meetings. Projects can be discussed without disturbing other employees who continue working, but also without excluding them completely. Unconventional and innovative, that is how internal meetings shall be.

Furthermore, the exchange between people is encouraged with a number of armchairs and sofas located in the central corridor. The height of the backrests shields the seated person from views, but it is low enough so that these seats do not form completely closed off areas in the “Open Space”. Thus it’s possible to address an employee walking past concerning a project or work and make telephone calls without distracting neighbours. This transparency is also implemented on the management level.

The offices of managers are only separated from the employees with a glass wall. Visually, the intimacy is maintained. This concept was generally applied except for a few conference rooms, like the one used for board meetings: the impressive room is characterised by a projecting oval table, around which the decisions concerning the future of the company are made. At the same time, nature with its powerful sublimity and the backdrop of the town make visual contact with the board members through the exterior walls that are glazed on three sides. That way, the connection to Enovos’ local roots in Luxembourg remains.

Space for people and nature

On all levels, the departments convey the impression that there is enough space for every one of the 300 employees. The interiors provide the possibility to condense the offices in an uncomplicated way, without compromising the interior concept.

The company restaurant was set up on the lowest level of the existing building and designed in Enovos corporate colours. The appetizing orange-red adds a delightful touch to the dining hall, which opens up towards the wide corridor. The existing columns of the Soteg Building now serve as dividers in this space. A historic black-and-white photograph of the town is used as a visual room divider. Here, too, the relation to the outside world is tangible, which is a basic motif throughout the entire building: a surrounded miniature garden on the outside irresistibly attracts the eye.

Special attention was attached to the staircase, which should not lead a miserable existence next to the effective panorama lift. The spacious staircase, handrails made of oak and the strict avoidance of artificial lighting – there is a sufficient amount of daylight – make climbing stairs a real pleasure.

At the place where a covered pedestrian walk links the new building to the 19th century pumping station, the old and the new come together in an area of tension. Along the walkway, a strictly laid out square spreads out, whose deep green lawn is interrupted by a water terrace. The red brick building with its generous window areas indicates the bygone heyday of this industrial area for iron ore, whilst the new building resolutely faces current challenges of the globalised market. So awareness of the past and future orientation are united at this point.

A café was set up exactly where the connecting path joins the ad ministration building. In a very tangible way, the cohesion and communication among employees working in different departments and buildings is thus promoted: a brief “Hello!” shall have the chance to develop into a conversation over a cup of coffee. This is the only way how a positive working atmosphere and lasting personal affinity with the company can develop.

The new building integrates into the topography of this industrial-historically charged location and sets a signal with its external effect whilst also engaging in a dialogue between building and surrounding. It is the expression of an architectural art, which never grows tired of reconciling man and environment by documenting the being home of people in a natural environment and simultaneously showcasing a company, which asserts itself in an international economic environment. 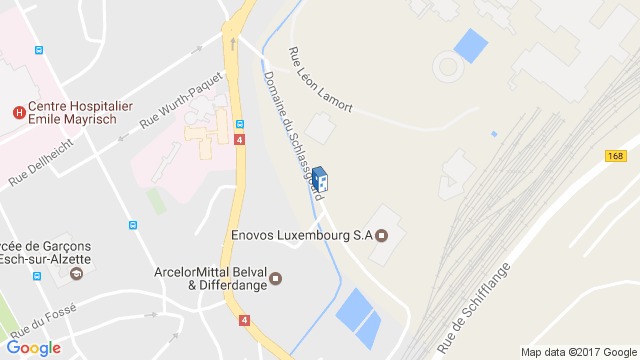