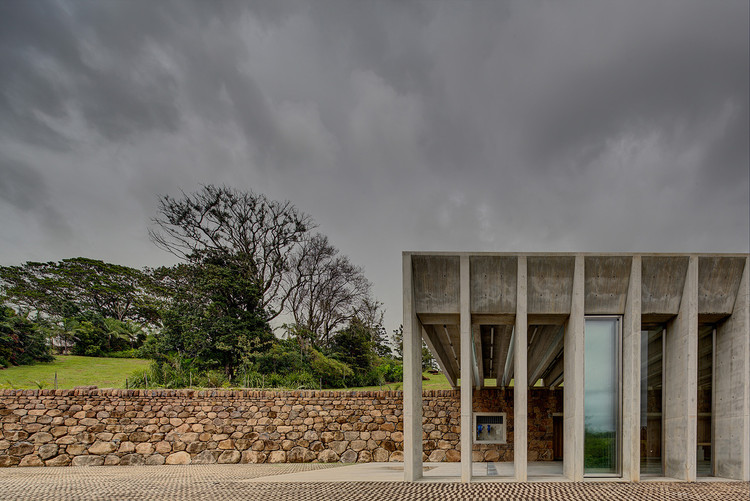 Text description provided by the architects. Lune de Sang is a unique inter-generational venture that will see a significant former dairying property in northern NSW transformed into a sustainably harvested forest.

The vision is exceptional in that rather than planting a fast growing crop, various hardwoods of the region have been chosen to establish a rainforest landscape that will take generations to mature. The hardwoods will be tended to maturity and then selectively harvested, the long lifespan of the trees meaning a wait of between 50 and 300 years before the various species fully mature.

We were captivated by this long term vision, a vision that goes beyond one’s lifetime.

The design is a close collaboration with our client, one bound in collective understanding of the site, landscape and time. The rainforest timber’s unhurried growth has influenced our approach for inserting architecture in the site with all the buildings being designed to respond to the notion of a 300 year lifecycle.

The structures, both for working and habitation, are to be endowed with a sense of permanence. They have been conceived as ruins in the landscape; ancient concrete and stone structures that have been unearthed and retrofitted for comfortable habitation with crisp glass and steel details.

The ambition is an elemental and atavistic architecture. Structures that may appear to be a rediscovered ruin from the day they are built. We looked at ruins, forms in nature, and how some structures become cared for across generations. We sought materials that would mature over time, intensifying the building’s qualities rather than degrading it. We settled on concrete for its multiple qualities. As both a precise modern abstract material but also ancient in its quality, concrete serves as a universal material that can be read in multiple ways and deployed for both structure and enclosure.

The first structures to be constructed on site are the two sheds. Conceived as site ordering devices, the sheds are part of the delineation between the emerging forest in the valley below and the inhabited domestic landscape toward the ridge above. The sheds are grounded, rhythmical buildings with a crisp repetition of elements that sit with other constructed landscape elements to establish a territorial line and amplify the contrast in landscape condition. The sheds straddle earth berms and stone retaining walls that control the contours locally to contain space before the energy of this gesture is released to the open grass paddock.

Buttressed against the fall of the land, grasps the space within its folded structure. The volume of the shed is anchored into the hillside to provide elemental prospect and refuge. A calmness pervades each interior enhancing the spatial experience of the building and the landscape beyond. The thermal mass of the concrete and earth adds to the sense of calmness within and makes the interior significantly cooler in summer and warmer in winter.

Shed 1 is composed of a main space with a lower workshop space to one side contained within the retained hillside. The structure frames views into the landscape - the staccato of the forest in front when viewed through the rhythm of the columns, the visual release upwards and outwards to the open paddock and fig tree, and the stone wall as it winds into the building.

In fullness of time, both structures will only be revealed upon arrival at their immediate setting intensifying their presence in the landscape. In the mean time, these quiescent structures will continue to look out to the forest waiting for its emergence. 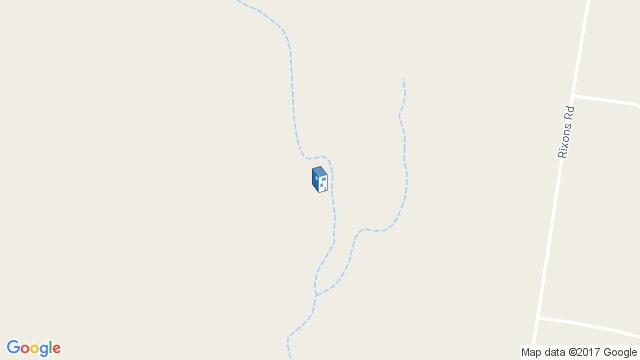 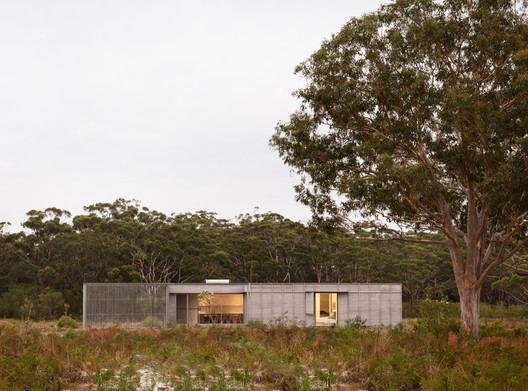