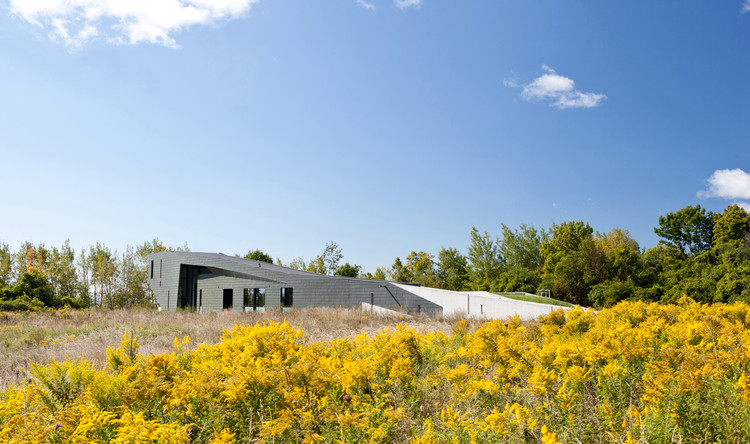 Text description provided by the architects. The Port Hope House is located on a hundred-acre site bordering Lake Ontario, 5 kilometers outside of the town of Port Hope, Ontario. The property gently slopes southward for a kilometer across farmland, is interrupted briefly by a dense woodlot, and terminates at a 75-foot cliff that falls into the lake.

Adjacent to the cliff edge is an abandoned rail passage cut into the earth that once served as the first train connection to southern Ontario. This 15 foot deep trench runs parallel to the water the distance of the property and generates another unique ecosystem on the site.

The project’s unique location is the single most important element in the design concept. The specific location of the house was selected to take advantage of the confluence of four key site conditions: the dark peace of a woodlot at the northern end of the property; the openness of a vast fallow field; the unexpected quiet of an abandoned rail cut; and a thunderous lake embankment. One by one, these are carefully woven into the architectural experience of the project, resulting in a delightfully orchestrated presentation of surprising spatial contrasts that balance the two natural extremes of the site – expanses of land and expanses of water.

Indeed, the project’s tectonic expression is based on its physical relationship to the topography; gradually rising cast-in-place concrete walls are embedded in the earth of the property: at their lowest point subtly framing both views to the woodlot and thermal baths and then growing upward, thrusting the living room, kitchen and master bedroom into a dramatic cantilever above the rail cut to capture unrestrained views of the lake. What begins as a single lifting and curving form splits into two framed volumes, allowing via a subtle separation, clerestory lighting to permeate deep into the living areas. A sloping deck connects the master bedroom with both the pool and field.

The sustainable features incorporated in the house make for a minimal ecological footprint and nominal reliance on the grid. The form and orientation of the project maximize beneficial solar exposure and a high-performance envelope is achieved with predominantly solid east-west facades and heat mirror film glazing. The long concrete walls create thermal mass which works in concert with the ground source heating system to reduce the need for natural gas.

A charcoal zinc cladding flows over the concrete, forming a highly efficient building envelope. As the house rises toward the South, the material palette and massing lighten to privilege openness and light. Internal courtyards and clerestories facilitate natural ventilation and daylighting. Emphasizing the house’s organic connection to the land, water and sewage are treated on site, rainwater is collected for irrigation and the majority of land around the house has been re-naturalized, save for vegetable gardens that seasonally supply the clients’ needs.