Orizzontale, winners of the 2014 Young Architects Program (YAP), have transformed the MAXXI’s piazza Boetti with an “8 1/2” meter-tall mobile theater made of timber and recycled beer kegs. Built in just four weeks, the installation created an “urban room” for the museum’s Play with YAP events program that provided an inhabitable podium illuminated by a translucent wall of lighted plastic beer kegs for a series of concerts and events.

More about Orizzontale's design, after the break. 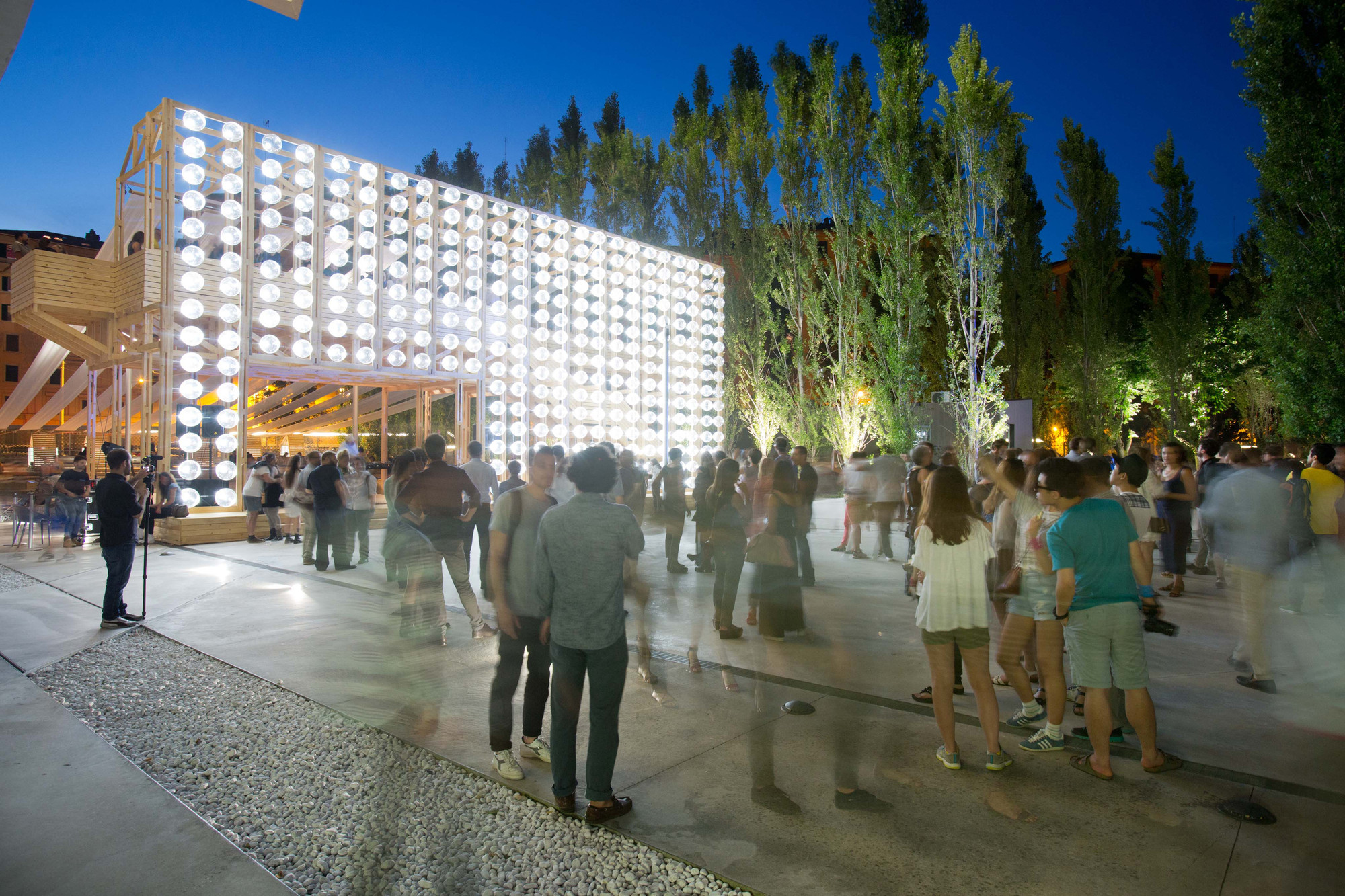 From the Architects: 8 1⁄2 is a mobile theatre, a machine to experience public space. It investigates the dual nature of public space, as the place of intimacy and elective relationships and in the meantime the preferential territory of event and spectacle. The installation intends to be a reflection about the transition that changes public space from being the background of private encounters and individual moments to being the scene of public events and collective representations.

8 1⁄2 consists of two complementary elements: the wall and the arena.

The wall, 8 and 1⁄2 meters high, is built with modular timber frames covered with beer kegs. It transforms the surrounding space laying down a principal direction and creates a threshold effect dividing the “front” from the “back”. An opening in the structure can be used as access point to the interior space and as stage alternatively facing one side or the other.

During the plays, the wall works as scaenae frons, backdrop or technical infrastructure for machines and equipment. A path climbing to an upper level can be used during the shows as a part of the stage or, in the everyday life, as a new point of view over the area. The LED lighting system works as a display that can show geometrical drawings, graphics, typographic fonts.

The arena: it consists in four “relational objects” and a canopy that goes from the wall to a linear system composed by six blocks. The arena is both a theatre, a place addressed to public events and plays, and a square, an architectural device for the daily use of the common space.

An accurate shadow study of the canopy allows both shaded and sunny areas during summertime. The wall and the arena work together creating an intimate relational space, an “urban room” where you can enjoy the space together, play, chill or simply stay.

8 1⁄2 is an installation specifically designed for piazza Boetti, but it can be easily dismantled, re-assembled and rearranged in new configurations, cleverly adapting to the new site. The structure doesn’t heavily affect the sites, reducing the cost of the first and the further re-installations.