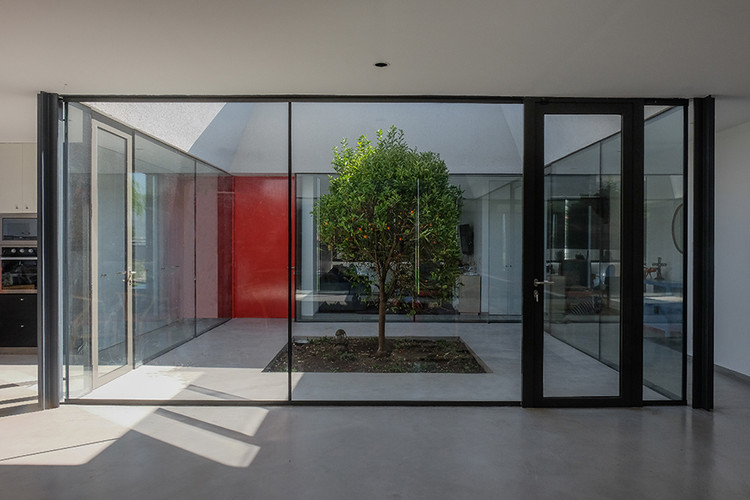 Text description provided by the architects. This house is located in a suburb 20 minutes outside of Santiago center; in a 2500 m2 flat plot with no particular features beside the huge amount of visible sky compared to the city nearby. The project aims to trace the site in relation to a patio-pavilion.

The pavilion-structure enhances the circulation and views between the common areas, which are placed facing each other through a shared patio, while simultaneously facing the exterior along its outside perimeter. The trace, however, divides the pavilion and the surroundings into different units according to its preferential orientations.

The pavilion is a nine-square grid open to its four sides, structured by 16 metallic columns, with a glass-enclosed patio taking up the central module. The trace consists of 6 freestanding masonry walls placed perpendicular to the edges of the patio –bracing the roof– separating the house into different zones, and extending its length to the site, thus delineating the garden according to the interior use.

This project is thought as a set of internal rules with the capacity to qualify the rooms, the house and the surroundings with similar attributes. Its configuration determines the maximum amount of parts with the minimum amount of differences, remarking every exemption as notorious.