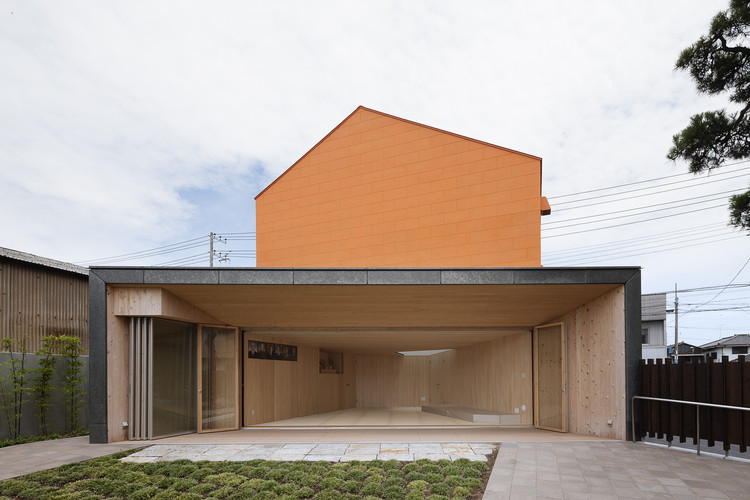 This project was launched to inherit the memory of the initial building of Re-Tem Corporation and improve the surrounding environment. The initial office facing towards a planned road must be moved backward. The discussion on the possibility of dragging back the building with the constructor in consideration of the structure concluded that the building would collapse if dragged. The client agreed with our proposal for inheriting the colors and shapes in the memory of his family in an abstract manner without regard to the original building. The office, carving of deity and small shrine as well as the outline of the entrance of his birthplace were to be integrated into the overall plan.

The office to serve as an archive of corporate history tends to be something closed like a warehouse. However, we proposed the addition of some extra space in consideration of the future possible use of the site as a meeting point of corporate executives or for local communication by the client’s parents. I simply insist that the space should embrace something a little open with a purpose different from the main intention of the building. I will describe the three reasons below that have led me to this idea.

A building is a frame

The first reason is associated with my idea “Architecture is frame”. An architect who was my teacher once said “A man will get ‘accustomed to’ a building”. I felt somewhat disappointed hearing that as getting “accustomed to” a building could also mean that one might lose the sense of freshness in the building. Since then, I have been thinking of the building that “no one gets accustomed to”, the concept difficult in principle. Buildings are fixed and do not change. However, the surrounding environment, neighbors and cars you see from a building, or people, furniture or pets if you turn your eyes into a room are not fixed. These will remain changing. Leaving aside the fixed property of buildings, I wanted to create a building that would always be new to you. To this end, I reached the conclusion that a building can only be a frame of these changing objects.

A building open to a city

The second reason is related to my experience when working for Shinshu University in Nagano. In those days, I was addressing the problems of streets with closed-down shops in the Nagano city center. These problems apparently specific to local cities could also occur in urban cores. Once the sites with greengrocers, fish markets or bars are cleaned out to construct apartments or offices, the ground level will be ruined in a moment. To achieve a lively city, the ground level must essentially be revitalized by a building open to a city. The local problems might be caused by large retail stores, motorization or other factors that cannot be solved by architecture alone. However, something must definitely be improved with architecture, that is, to create a continuous crowd in the ground level developed as a city.

A building accepts us

The third is related to an earthquake disaster. When the Great East Japan Earthquake occurred, I struggled to arrive at a hotel in a local city where I felt devastated by the images on TV. In Tokyo, a number of people unable to return home started to find themselves unknown where to go after the earthquake. Some public facilities that blocked the entry of people like a fortress were accused. I felt sure a building would be no fortress. I thought a building should be as flexible as a sponge that absorbs people.

The historical archive of the company (A) that follows the building outline as abovementioned is structured with twobys every 303 pitch as a modern, abstract equivalent of the existing building to express the notion of abstractness. In contrast, the α space (B) I decided to create for the threereasons above is designed to be widely open space facing towards the garden and promenade to enable various types of communications. The space is structured to be open fanwise so the client will be able to view his memorable pine tree. The open α space (B) has been inserted into the closed space (A), and the residual space is used to make the storage space. Also, a chimney-like space is extended in this α space (B) to let the sunshine not only in the α space (B) but the closed space (A) at the same time. The phosphate-treated steel plates are used to cover the α space (B) as a material that tells the history of the client company initiated as a steel recycler.

The garden serves not only as that for the α space (B) but as the promenade for the client’s parents. The footpath is made of concrete panels while the other sections are arranged with paving or garden stones found there as well as the gargoyles taken from the client’s birthplace. On part of the concrete wall partitioning the neighboring premises, the outline of the entrance of the client’s birthplace has been reproduced with concrete and the relief of the old office has carefully been preserved and placed on the wall. The carving of deity has been modernized with concrete in synchronization with the fan-like shape of the α space. It would be wonderful if the century-old company just reborn in the modern world can create a new mode of corporate communications here in the future. 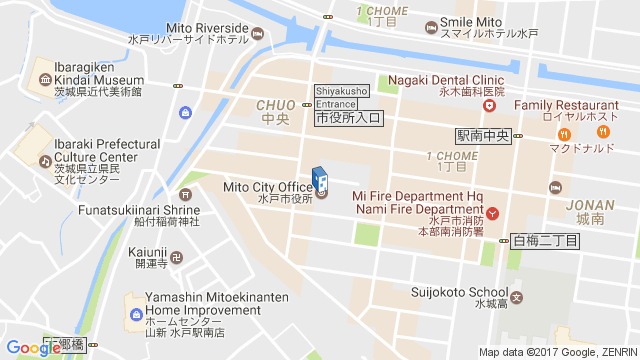