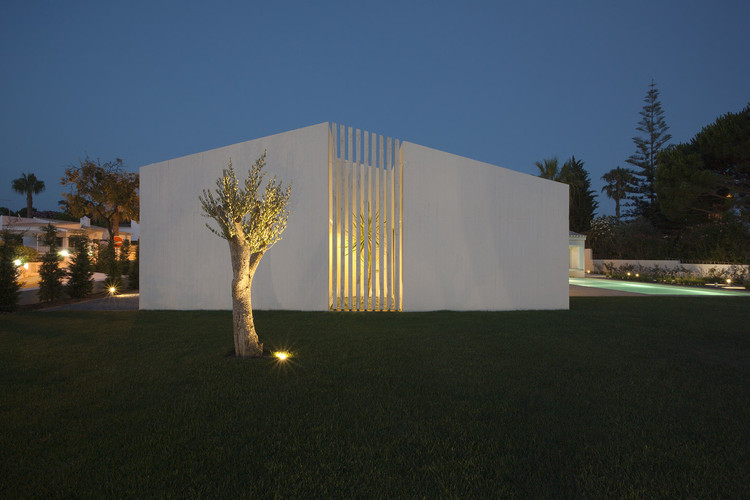 Text description provided by the architects. The house is located in Vilamoura, municipality of Loulé, one of the most touristic places in Algarve and one of the top vacation destinations of the Portuguese.

Set in a neighbourhood of single-family houses, the project focused on an existing building dating from the 80s and on which it was proposed an intervention aimed at expansion and adaptation to a new program.

Thus, the project of rehabilitation / expansion focused on the following principles:

Invest on a clear distinction between private and social areas, taking advantage of the “L” configuration of the pre-existing construction.

Enrich the generator concept of the existing house, the porch, emphasizing the connection between interior and exterior with the creation of larger openings in south and west facades;

Insert the "patio" as an additional element in the resolution of issues associated with natural lighting and ventilation of the house, exploring simultaneously the crossing visual relations;

Increase the area of the pool with a water mirror, resulting in a total surface directly proportional to the construction that involves it, creating simultaneously a privileged area of ​​outdoor living.

Volumetrically, the project tries to introduce greater clarity to the constructed object by correcting some alignments and reinforcing the “L” configuration that the building originally held.

The new configuration is achieved through new volumes that are attached to the existing building in the continuity of existing plans and replicating the geometry of coverage plans, but distinguishing itself through its singular materiality.

The combination of the initial construction masonry plans and the exposed concrete plans allow us to identify the different "times" of the house, combining pre-existing structure with the recent intervention, which are intended to build new spatial relations and new programmatic commitments.

These new "bodies" enabled simultaneously to articulate the connection that the house establishes with the streets, which is closed, and with the garden, which is opened.

Functionally, the program is distributed on one floor only.

The Hall operates as a “kneecap” from which the two major areas are distinguished - social area on the left wing and the access to the rooms that develops threading the entrance area.

The area corresponding to the social program includes the kitchen, the dining room, the living room and the large porch that relates directly to the pool.

The extension of the pool supports the visual relationship between the living room and the water level while enhancing the connection between the building and the pool around which is located the large outdoor living area.

The more restricted area results from linear distribution of three bedrooms, the last being the master bedroom of the house, where a new volume receives the toilet, dressing room and a small patio between them, responsible for lighting and ventilation in these two spaces.

Still in the entrance area the office/library allows to open or close itself, compressing or dilating this area, with it being possible, in the future, to integrate it in the bedroom wing.

In synthesis, the design strategy adopted results of the combination between the demand for a clear reading of the object and of its program of uses and functions.

The patios and porches are responsible for mediating the interior spaces and the exterior of the house.

We opted for the use of traditional materials and coatings, as exemplified by the cement materials, plasters, woods, and the pottery of local tradition, combined with the construction of new elements in apparent concrete with wood planks formwork that allowed a certain plasticity to the material, adapting it to the scale of the house program.

The painting of the house in an off-white color acts as an articulating element of the design, unifying the pre-existing structure and new building elements.