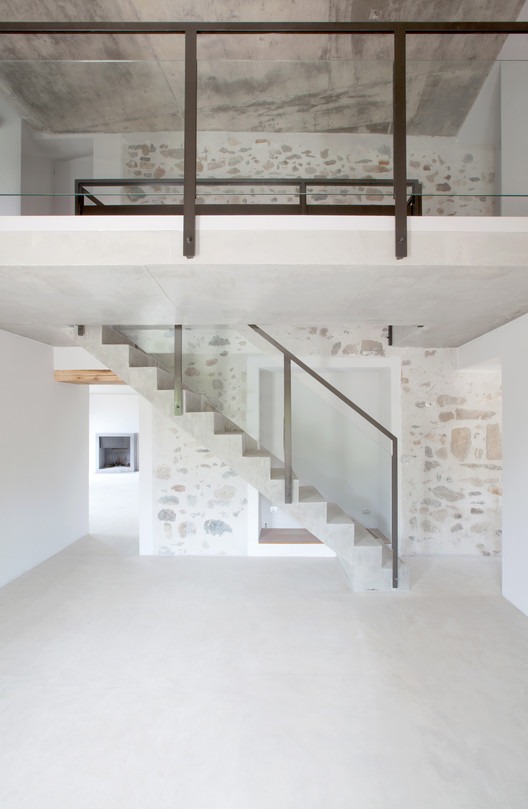 Text description provided by the architects. The client had knowingly bought the house in a state of near ruin with heavy transformation in mind. With two university age children, they wanted three independant but communicating units; the largest for themselves to stay for several months a year and two others as weekend places for the children.

The house, being the ultimate in a row of houses that formed an old nucleus, has three facades. On the fourth side (the same wall it shares with the neighbour) it had a barn attached to it. The house had two floors, 50 sqm each. As high as the house, the barn was 6 by 5 meters in plan but had no floors.

Both were poorly built with fragile (but thick) outside walls containing as much stone as ordinary dirt. The thin wooden floors had long fallen down. In spite of all this, the municipality was adamant on conservation; at most they would let a couple of new windows after approving drawings for the new facades. All exterior shapes had to be maintained.

In order to keep the walls together, extensive concrete work was employed: from injected concrete as new fundations to concrete floors, casted in part in the stone making the whole more hyperstatic. A full height concrete core containing all bathrooms provides lateral stability and most of all structures the whole project in it's spatial concept.

The main apartment occupies the entire ground floor with a kitchen, a double-height sitting room, a living room and a guest bedroom. The main bedroom Is on the mezzanine level which looks onto the sitting room. This mezzanine is the connecting element of the three units and is central to the idea. The daughter's apartment, basically a loft under the roof, is reached by the old outside stairs and throught the kitchen as entrance on the first floor. A flight of stairs at the back entrance gives access to the son's unit which is a duplex in the old barn with a living area on the first floor and a bedroom upstairs.

The concrete slabs are left bare as ceilings and receive a cement flooring containg heating tubes. Walls are coated in a thick hemp based porous roughcast on both sides which was calculated to be sufficient insulation. Some are left apparent inside. Windows and shutters are in solid oak and with no basement all the technical units are reduced to a minimum and housed under stairs. 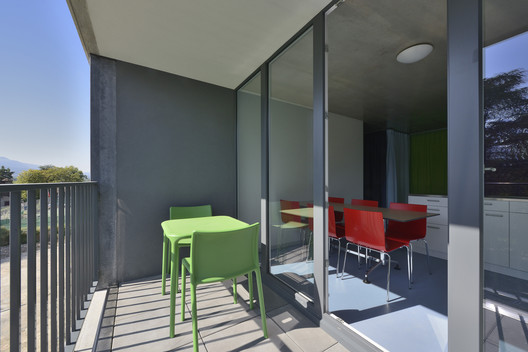