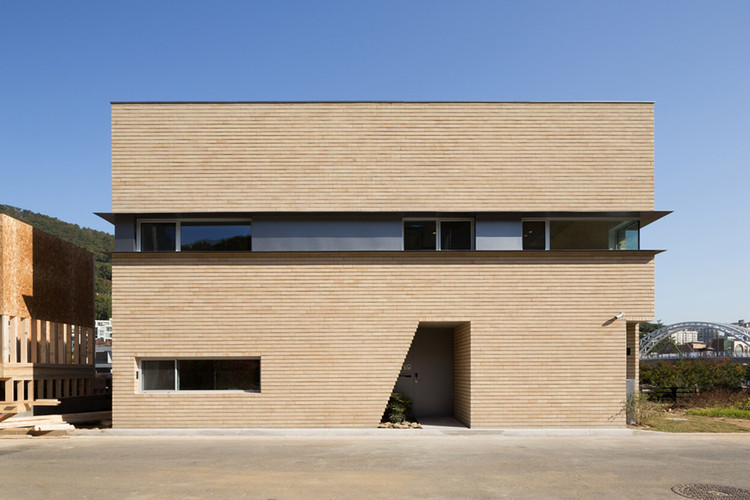 Text description provided by the architects. House resembling the owner

The site is located near UnjungCheon at W. Pangyo City where the space is open towards North and South. At a glance, it seems the building exterior is all covered up with bricks but as you review deeply, the ground floor level opens up in shape to communicate with the exterior space. This characteristic of the ground floor reflects the extroverted personality of the landlord. Meanwhile, the upper part of the house is formed as square shape with a cantilevered bridge framing the courtyard. This floating courtyard selectively frames the view of the surrounding atmosphere. This is somewhat similar to the owner's introverted personality. The scenery of the courtyard changes throughout all seasons by the Japanese Pagoda Tree (Sophora japonica). The tree is Green during spring, Bloomed with white flowers and fruits during summer and yellow foliage during autumn. The house seems to be somewhat opened and closed due to the overlap of each shape and the exterior is not too excessive but serene which exactly resembles the landlord.

Three generations of the young married couple, two children and grandparents have different lifestyles and different ways to live life. The young married couple lives independently while building their career. The husband is a Stereo maniac while the wife likes to read books in a quiet place. The grandparents each have a different sleep cycles and the grandmother is in need of an open space since she sleeps late evening. The older child who will soon experience adolescence likes to read books by itself while the house itself is a playground for the younger child. As they grow, more space for them will eventually increase and much individualized areas will be in need.

Even though three generations live altogether, hierarchy does not exist in this house. Instead, there are two spaces which connect each floor and each generation among the family, the Family room and the Courtyard. There is no livingroom in this house. Rather than creating a typical spacious living room where it was mostly seen at the apartments they lived in, a family room was made to fulfill each individual needs. The Family room has a high bookcase/shelf which follows the amphitheater stairs. The children could study or play on the steps since the amphitheater steps become a multi-functional element as a seat or a desk.

From the day they move in, the younger child could lie down and start coloring the sketchbook on these steps. While the Grandfather sleeps early evening, the Grandmother could babysit the children at this area and greet her son and his wife coming back from work. The Family room not only connects each floor but also connects all generations living in this house. The cantilevered Bridge above the courtyard not only opens up the public first floor space but also partially shuts the private spaces located on the second floor. The upper courtyard is a void space which is visible from all perspectives inside the house and creates connection among each space so the house could breathe.

Selecting the boundaries for each room

This house does not have a door catch. Each room in this house does not have any hierarchy and it°Øs located all through the diagonally placed two voids. The first floor is majorly consisted with three blobs divided into three areas. As you enter the elongated entry, the Kitchen and the dining room are located independently on the right side and as you follow the hallway on the left, the Family room widely opens up as if a mouth is wide open. Last, towards the right another independent space is provided for the grandparents. Though it°Øs an 'L' shape configuration, it was an agglomeration of three independent spaces within that configuration.

On the second floor, three rooms are placed near the two diagonally placed voids while also connecting two rooms with a cantilevered bridge to provide a continuous square circulation. The Sliding doors/pocket doors selectively create boundaries for privacy. Eliminating the hierarchy of a space and selectively creating boundaries for privacy all started by the concern for the three generations to live well altogether.

Pangyo City is an unfamiliar neighborhood since it is not a spontaneous settlement. It also means that it is difficult to overcome the limitations of carefully crafted Residential district planning. A cold war exists between the Town houses built on the north hillside of UnjungCheon and the High-rise apartment building located on the East side of the stream. Already, these two elements further cluttered the landscape view of West Pangyo City and no further action needed to be made to ruin the view even more. The material of the White Clay Brick House was placed so a solid vertical line was not shown to actually create an illusion as if a Square element has naturally come up from the ground itself. The horizontal frame was located so it was open or closed relative to the surrounding scenery and like an eyelash facing the view, a cantilevered frame created a generous amount of shade.

The L shaped wall facing the UnjungCheon slowly curves to delightfully lift up the cantilevered bridge above the specimen tree at the courtyard. Through the deep openings at the steady and solid wall, the rough texture of a brick wall enters the interior of the house. The interior finish of Birch plywood was also placed with the same pattern as the exterior to provide different perspective feelings. When it was viewed from the bottom it looked like several layers, but when it was viewed from the top it was a solid face. As the interior space often narrows, widens, lowers or rises using two different types of opposite finished wasn't awkward. Over time, the birch color will eventually darken due to the oxidation and the Japanese Pagoda tree will eventually grow to fill up the courtyard as the function of each space changes while the children grows. And that is how a house becomes more of a house.