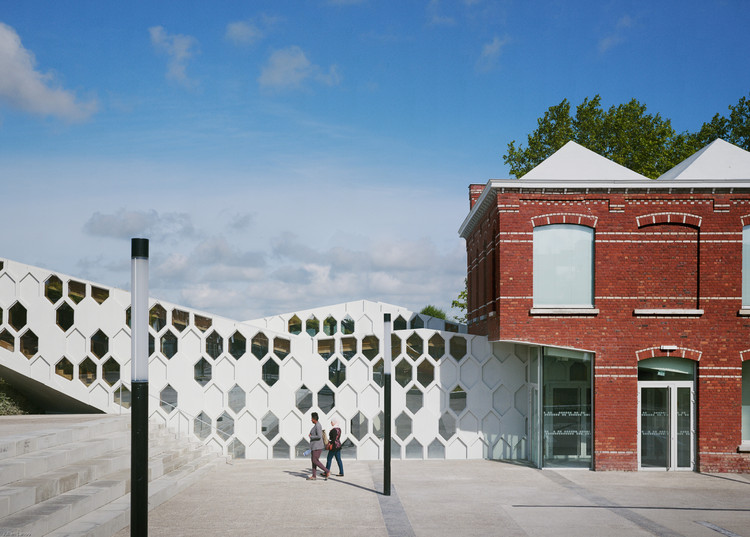 Text description provided by the architects. The building will be developed over a surface area of ​​900 m2 and will consist of two parts, an old part - the Tiberghien textile factory’s concierge service along with its surrounding wall - and an extension that will lean on these historic elements.

The new building, leaning against the surrounding renovated wall to the west, and against the old concierge service to the north-east, will consist of three volumes, where the roofs, treated as a continuous surface, will ripple to bring the natural light needed for the different spaces nestled in the heart of the media library. The eastern and western walls will form a set of perforated structures, opening the view to the outside while protecting it from the passer-by’s looks. The attention will be paid to the entrance’s treatment that will be done in an instinctive and evident way, through the concierge service, preserved yet carved, sliced ​​and widely opened onto the courtyard. The ground floor will host the public, since the first floor is reserved for the media library internal services.

From an industrial past that is still very present in the collective memory - the old Tiberghien spinning - arise three white wings from the media library. Their structures, similar to an organic matter, match the ground shape, spread out, climb and impose to the passers-by view, as if to catch both their eye and the light. The contrast between the two successive vocations of the place is deliberately highly marked by a double architecture, contemporary and traditional, leaning on each others, coming together and handing over to each others. This building, resolutely looking to the future, solicits by its remarkable elevations, closed from the north and the south, opened in mesh from the east and the west, providing an "inside out" form suggesting the impalpable link between the inner and outer life.

« We have designed this project in perfect harmony with the neighborhood’s history and topography. A building inserted in the heart of the landscape, a landscape construction, a mineral wave in the heart of the nearby future “Jardin des Lettres” (“Letters’ Garden”). The media library is not only an enclave in the middle of an ever changing world, but also a place to live connected to the city, which its outer court and bleachers will extend inside the auditorium”.

Through its central location in the "Inhabited Park" and the graphic treatment of the honeycomb facades evoking an extensible organic stained glass, the media library converses with the surrounding landscape: the “Jardin de Lettres” ("Letters’ Garden") to the west, the “Place des Jets” ("Jets’ Place") to the east, the new “Fin de la Guerre” (End of War) avenue to the north and the Belencontre district that develops towards the south.

Interior: A Place of Cultures and Lights

In this open and liberated space, the furniture has been custom designed to fully participate in the identification of areas for the sake of the architectural consistency. Predominance of white and wood for adults, colors for the younger ones.  The light participates in the interior especially with the cells that allow a precise and directed input on selected areas: the children’s corner, the reading corner space ... At the heart of the media library space, it is through the roof undulations that the light penetrates. The synthetic flooring consists of carpet tiles: a carpet made ​​of free-form tiles which allows great flexibility in patterns creation, and breaks with the rigid structure usually proposed. The interlinked parts generate non repetitive graphics, specific to different areas, and form a visual echo to the organic structure of the media library.

"Through the flooring coverings, and like the laid carpets, we seek the sensation to develop through the spaces like in a natural landscape, a surprising combination that sometimes participates in the poetry of the place." The graphic honeycomb facades evoke from the outside a hive of knowledge. From the inside of the media library, the facades’ structure offers an interpretation that would divide the city’s reality into pixels. It is a unique place, a traversing volume where the changes in the ceiling’s height prioritize, creating the spaces’ intimacy. The constraint of the field’s difference in levels has been bypassed to give birth to a terraced room welcoming the spectacles and projections. From the outside, the fender that shelters it and develops on the court reinforces the idea of a set where the environment and buildings are set up.

The woodwork, for the facade and the roof, signs the junction of the 3D digital design, highly accurate, with the traditional building technique. This building, one of a kind, defines the outlines of a high precision wood architecture never achieved to date.

"From the wall’s image, massive and with a highly openwork design at the same time, we have considered several technical options: metal, concrete, and composite materials. Ultimately, we chose to use wood for its mechanical ability to bear, its construction quality where assembly is easy, and its natural plastic quality. We sought delicacy by decreasing materials to allow the light in. Our desire to achieve a roof as transparent as possible, and that literally carries the building, has led us to produce an assembly of thousands of pieces in a honeycomb shape by pushing the material’s limits. This engineering work, made ​​possible thanks to the computer, questions the traditional roof techniques and opens up new ways for woodusers. "

The media library skeleton, a real prototype preassembled in the workshop, needed 3,120 pieces of wood in order to complete the honeycomb facades and the roofs, and 2134 of assembly metallic pieces.

"If architecture’s boundaries are those of the technique, then, we invent a technology that allows us to explore our imagination ... the structure’s organic aspect is reinforced by the absence of rupture in the building, inevitable when standard techniques are used. On the facade, the glasses are inserted directly into the wood, frameless, and the white resin that covers the whole ensures the cohesion and the water and air tightness in a boat hull style ...” 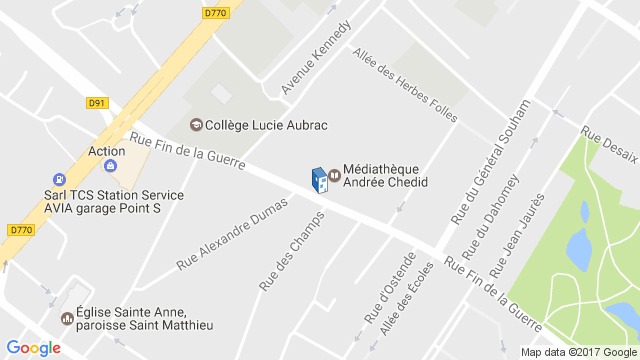