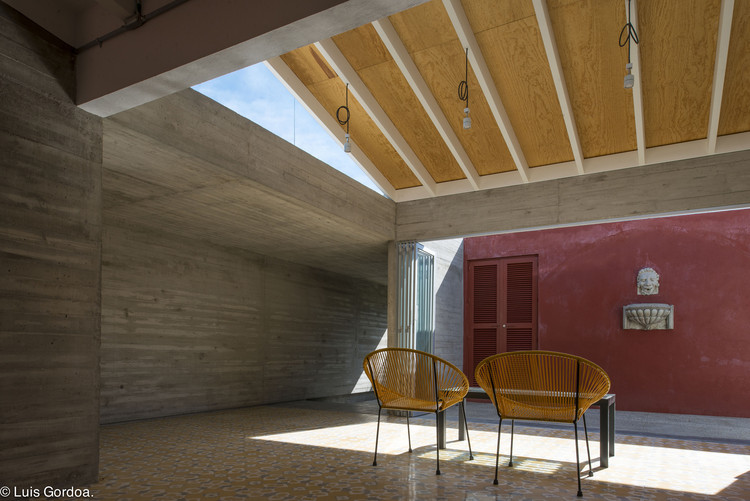 Text description provided by the architects. The project consisted on transforming an unused service area of a big rambling house located in the limits of the historic center zone of Cuernavaca city into a studio-dwelling for a young historian. The main objective was to cover all specified necessities assigned to the project with the least possible operations taking full advantage of the existing building and the client’s budget.

The studio-dwelling, located over a garage that covers all the front of the lot, has views towards the street on the east side and views towards a garden that leads to the main house on the west side.

The transformation lied in the definition of three basic elements: the access tunnel, the integrated carpentry work of plywood and the mosaic of handmade paste. Each of these elements were highlighted by their materiality and contrast with the white used to cover all the walls and original roofs.

The access tunnel is an exposed concrete element that serves as a hall to the studio-dwelling, it goes across the studio and it turns into a viewpoint towards the garden of the main house. The access tunnel is a structure that evidences the transformation performed in this space and, because of its apparent finishing touch, will grow old as times goes by, writing a new history of habitability.

One specific necessity to be accomplished within the project, due to the client’s activities, was to have a bookcase that could storage a big collection of books, in addition to flexibility for study and work places. For this reason, a big space was delimited for this task where the bookcase was developed in a perimetral manner, integrating the existing windows in a way that the free space remained. Hidden desks were generated in the zone of the windows to allow multiple uses. Plywood with pronounced grains was the chosen material to emphasize the area and to bring warmth to the space. All the carpentry work of the studio-dwelling was done with the same material using the same height to unify the furniture.

For the interior floors a mosaic of handmade paste was chosen. Material that was originally present in a bad state under a vinyl floor in the service rooms. The new mosaics that were chosen have the same yellow color as the original but with a handmade design, thus recovering an old technique and a tradition of this kind of coatings widely used previously in the downtown of Cuernavaca.

Lyeva 506 is an exercise of dialogue between the past and present in one of the most ancient neighborhoods of the city of Cuernavaca, an opportunity to relight and revive the historic center of the city taking advantage of the preexistings and starting from them. Where the possible and future interventions become one layer more of its deposition.