Read more
Save
The Wall of Nishihara / SABAOARCH 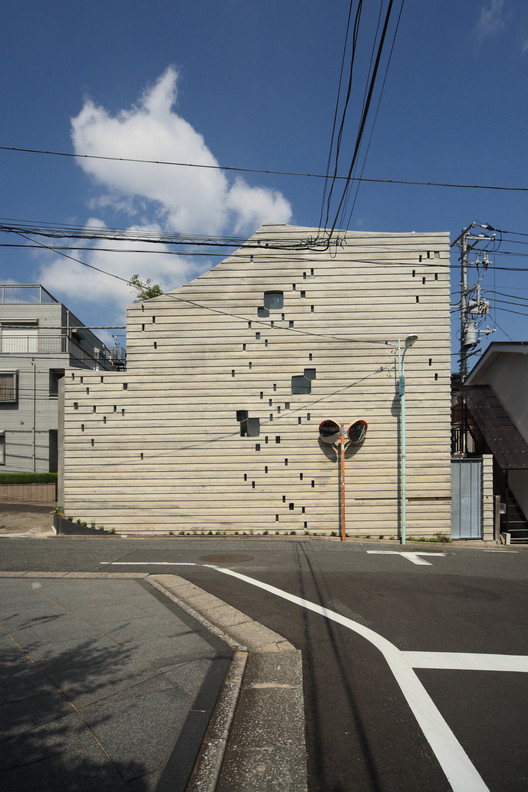 This house on upper hill in Tokyo stand at small site with 3m width between two roads. We have created the space for dwelling in the small gap where residents could live in secure.

The multi leveled floors are connected by rope of stairs and its experience is like climbing up the tree to the sky with looking at the scenery of site around.

At first, we have visualized thin and strong wall as a membrane which contends on the border line among Architecture, person, substance, and phenomenon. The depth exists in the thinness and material strength exists in bordering weakness.

In other words, the wall has both aspects strength as substance mass, and transparency as phenomenon.

The unevenness made in laps by turns a cedar mold, a concrete wall creates the shade on the rough texture, it seems that the wall with the worn opening is parasitic on the residence image with the surrounding hedge forest around the site.

In order to make the domain in which man can live in the narrow place of a both-sides road, the detail of “Kabemado=opening-wall” which wraps the body was able to be considered, maintaining relationship with outside.

The rich depth which may fully feel distance with the exterior as an abode also into thinness is produced inside.

The small window dug on the concrete wall brings felling of “Okusei=inner depth” and “Yami=darkness” which trees as the origin of a dwelling make, Finally, they developed once the structure of space with the darkness which trees have, and became a trial which is reconstructed as an Architecture.

As a result, while the exterior apparently felt closed space, it connects habitant with a city, and also provide an image as the whole trees evoke, the inside it was [the inside] open inside brings about raw with the darkness of space, and the depth.