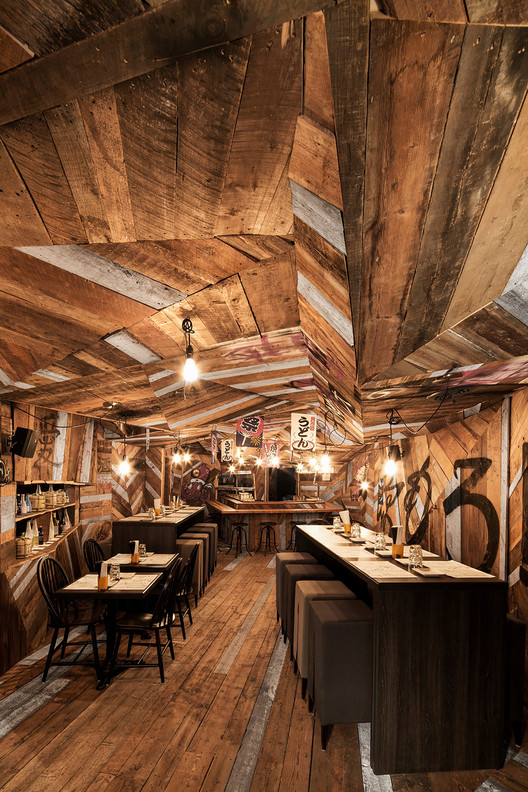 Text description provided by the architects. For its latest Kinoya, interior designer Jean de Lessard has tapped into the sources to emulate in his design the primary spirit, function and aesthetics of the izakaya[2], as the latter was originally an informal place where people drank beer and sake. The transformation is particularly unusual that it explores through extreme design intimacy in relationships between people, making of Kinoya a true representation of the unique approach the designer has developed about the different ways of occupying a space.

The notion of confinement is staged with simplicity using fractal geometry and the broken line: a box which shape recalls an articulated snake now fills the inside of the black box where of the previous Kinoya only remain the floral patterns. The box creates a break between the known/predictable (the outside world, the opening) and the unknown/unpredictable (chaotic enclosed interior, full of nooks and crannies). "For a space to become Event or Emotion, it must generate its own energy.

I designed an enclosed space that is totally focused on the business of partying. The design elements are deliberately oppressive or aggressive, so that it is anarchic, rough and where we are loudly heckled", explains Jean de Lessard. The vertical drop of 4 to 5 feet between the front and rear parts of the ceiling contributes to the cocoon effect.

The place is always full since the opening, despite the fact that one must stand shoulder to shoulder. The soft lighting and the cozy atmosphere makes it a friendly environment where the smell of wood mingles pleasantly with the aromas of mouth-watering dishes.

The space, such as how one could figure what the interior of origami looks like, is composed of triangles of various sizes, crookedly placed in a random fashion. "Jean told me what he wanted to feel in this place. Where one had to be cramped also. It's a fantasy cave where people are in a constant visual exploration mode", says artist carpenter Dominic Samson, Solution durable, who built the structure, a piece of work he’s proud of and that he describes as uplifting.

A durable material, wood has an exceptional capacity of resonance and absorption. The irregularity and angularity of the surfaces further deflect sound waves, helping to muffle the ambient noise. The reused wood from barns is local and covers an area that represents 4,500 square feet. Boards of hemlock and white spruce of different width and thickness were installed in all directions. If this strengthens the idea of chaos, on the other end the glued-laminated technique used for the installation provides in turn a perfect finish.

The uncouth-tavern style decoration is left to its simplest expression: the furniture and lighting were salvaged from previous Kinoya, drawings and graffitis offend the eye and confirm the urban character of the establishment. Kakemono banners that are used to hide the street also perpetuate the Japanese tradition.

In Japan, an izakaya is a place of socialization and of stress alleviation. Here at Kinoya, the narrow space forces to relate to one another, under his/her unavoidable gaze. The design has the West and the Far East (East Asia) beliefs about community spirit, closeness and brotherhood collide in a fun and joyful manner. 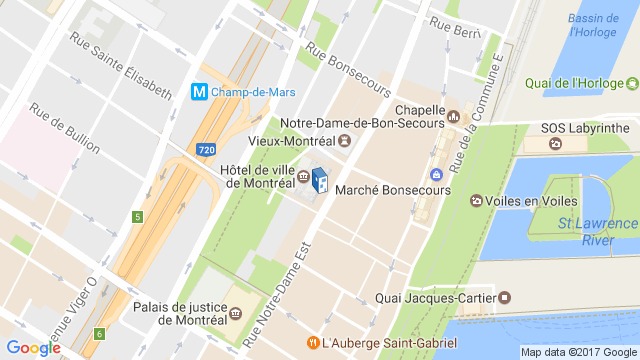