Text description provided by the architects. In May 2008 LWPB Architecture teamed with library planning consultant Richard and Bauer (Phoenix, AZ) to respond to the City of Oklahoma City's RFP (Request for Proposal) for this project. The LWPB/Richard and Bauer team were chosen from a field of 6 final candidates and awarded the project that summer.

Beginning in the summer of 2008, LWPB and Richard Bauer began to hold design charrettes geared towards finalizing the City of OKC/MLS program and design expectations. This visioning process lasted for several months and also consisted of schematic design layout and other iconographical studies of local elements of the Oklahoma built environment and cultural identity. The end user, Metropolitan Library System, had definite ideas of programmatic space for certain user functions and adjacencies that were incorporated into the floor plan layout for optimal building/user operations. Daylighting was important to the client as well. The client also desired, given the regional location of the building, a storm safe room/refuge area to be incorporated into the design.

The iconography of Oklahoma is known for its burning sunsets, emblazoned sky over endless prairie grass, silhouetting the elements of industry and agriculture. The horizontality of the landscape permits extensive uninterrupted vistas of the sky. The native prairie grasses have gradually given way to agriculture, windmill towers and the ever prolific oil derrick, which can be seen all over the landscape. The trussed towers of the windmill and oil derrick structure were main inspirations to the design. Rolling prairie fields have been captured in the form of the large earthen knolls that surround and anchor the building in the landscape. Since the project incorporates massive earth berms for the exterior façade makeup, the project team, design and construction, spent considerable time dealing with mass amounts of earth movement and stabilization.

The project also incorporates an access floor to house building systems; special care in coordination of these many systems had to be maintained. Large “derrick” structures that are located at skylight penetrations, eight in all, are all built out of steel angle iron and clad in glass to bring in natural light and form the individual conference/meeting rooms per the building program. These elements have unique detailing features. There really is nothing in Oklahoma to compare it to. Instead the facility is indicative of the rolling prairie of the region, silhouetting the elements and iconographic features of Oklahoma and its homage to the agricultural and energy industries.

Large areas of interior wood elements, known to the design as “Crate Form,” wrap the interior offices and ceilings, along with other features that give a glimpse into Oklahoma’s past dust bowl days and shanty towns occupied by the early rough necks. The storm shelter room, which also serves as the Children’s Program Theater, offers a vast array of faux piping and other elements depicting the “pump shack” commonly found on an oil field site. Bermed earthen knolls represent the rolling Oklahoma Prairie and are planted with a native tall grass known as Buffalo Sod. All signage and way-finding has been designed to emulate Route 66 icons and emblems popular along Oklahoma’s “mother road”. Book stack end panels depict pictorial scenes iconic to our state such as oil field equipment, prairie grasses, windmill vanes, and burning sunsets.

The project has attained LEED Silver Certification for New Construction, a sustainable certification granted by the United States Green Building Council. LED lighting, day-lighted interiors, geothermal heating /cooling, water-efficient plumbing fixtures, low-emitting finishes, and regionally acquired materials with high recycled content provide the facility with a low impact development sustainable footprint. This facility is only the second project of the City of OKC’s public buildings to garner this achievement. The first one being the Bricktown  Fire Station also designed by LWPB Architecture in 2011. 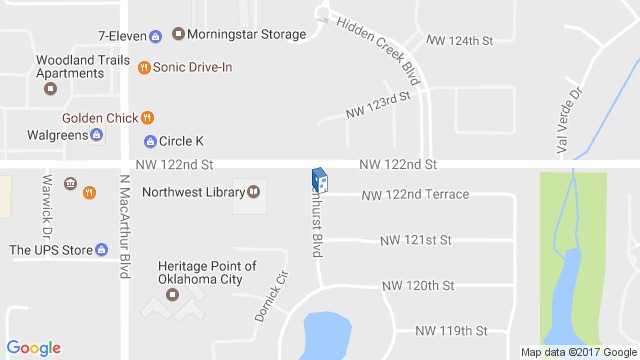 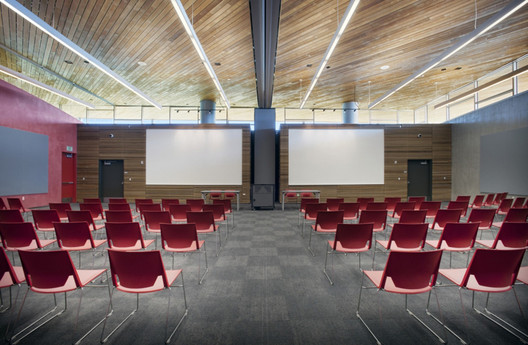