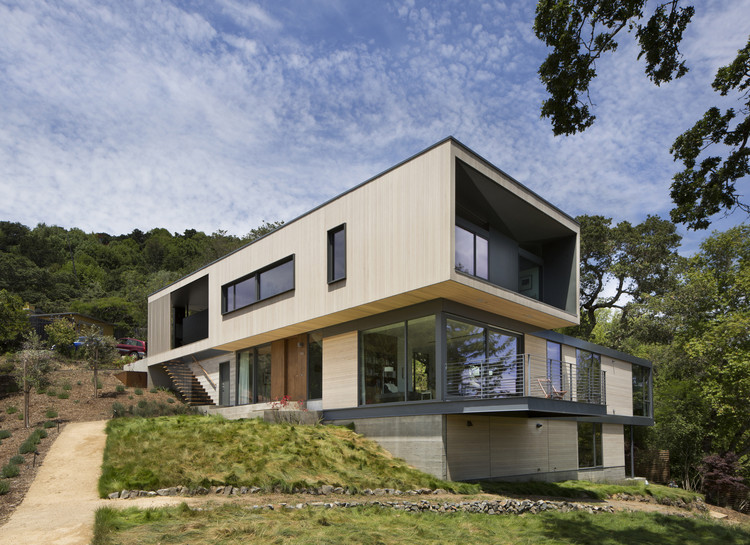 Text description provided by the architects. The design for this house was inspired by a desire to engage with the landscape, celebrate the native Oak trees and capture views of Mt. Diablo and the surrounding hills. Formerly a hunting and summer guest house dilapidated from years of vacancy, the old growth Douglas Fir framing lumber was salvaged for re-use and the 100 year old rock walls that traverse the property were preserved.

Envisioned for direct access to the outdoors and visual connection to the landscape, the house creates an L shape as two perpendicular volumes step down the hill integrating with the existing trees and rock walls. The materials selected--board formed concrete walls, painted steel and stained western red cedar--were inspired by the natural setting and rugged nature of the site.

Permeability between interior and exterior is achieved by providing sliding glass doors throughout the main level of the house, allowing the patio and cantilevered deck to be an extension of the living spaces. The entry also aligns with the outdoor patio connecting the North and South sides of the property. Floor to ceiling windows frame views of the hills and mountain beyond.

As part of the sustainable design approach, the Upper Level overhangs the Main Level on the South side utilizing passive heating and cooling strategies and Upper Level windows have 6” deep perimeter frames to provide shade during the hottest summer months. Additionally, the inverted hip roof was designed to maximize exposure for solar panels while visually concealing them from the street.

• House was designed for passive heating and cooling. A 4’-0” overhang and 6” deep perimeter frames around the windows were designed to shade the South glazing in the summer while allowing direct sunlight in the winter. The house was also sited to maximize shade from the existing trees on the West side.

• Re-use of all rocks on site to repair existing rock landscape walls and create new edging.