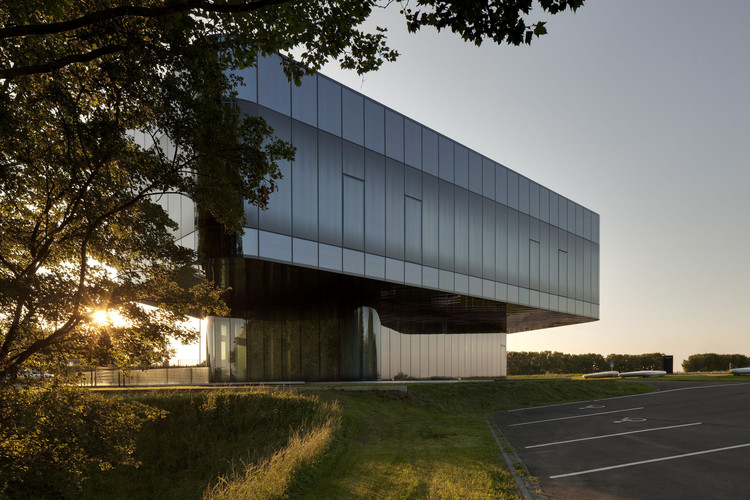 Text description provided by the architects. Situated in Maasbracht–near the Dutch-Belgian border–this sinuous 1.850 m2 office is a headquarters for the water traffic control of surrounding sluices, canals, and locks–all of which are adjacent to the river Meuse. This plethora of entangled waterways is heavily utilized for shipping throughout this area, at the confluence of France, Luxembourg, Belgium, Germany, and the Netherlands. Numerous previously disparate waterway control centers were combined to create this new office, and this regrouping determined its primary, curvilinear volume. This elevated polygonal shape strengthens visibility from the interior toward the immediate landscape, by allowing for elongated views in all 360-degrees.

Composed of two volumes; the office’s upper story cantilevers up to 10 m beyond its plinth, above an intimate reflecting pool below. Two paths slice through this shallow body of water–which encircles the plinth–and lead to the ground level entries, while a ramp provides access to the lower level, with its area for bike storage. The cantilevered volume’s underside is finished with a silkscreened black glass. This attribute amplifies the amount of natural light that reflects off the water’s surface–which is dotted with lotus flowers. During the winter months, this reflecting pool is able to function as a rink for ice-skating.

The façade of the upper, cantilevered volume is fritted with a gradient pattern of dots–whose density disperses at eye level; this buttresses exterior visibility with abundant interior shading. Appropriately, those responsible for the oversight of the office's waterway network have been elevated to its upper story. In this way, they retain a physical overview of their respective water traffic control areas, even though these waterways are now digitally controlled.

Ethereal, a central glass-roofed void organizes the interior, but also ensures ample amounts of natural light permeate throughout. Support areas and individual offices wrap this void; the latter separated from the former by circulation. Two staircases and an elevator provide access to the upper story; a ‘fast stair’ greets visitors at the main entry, ushering them upward, while a ‘slow stair’–so named for its switchback landings, and intended for use only by employees–delicately hangs in the oversized void. Omnipresent glazing lends transparency to the office’s interior; this permits voyeuristic visual access into and through the central void, but also other otherwise enclosed spaces, on both levels.

A nautical training facility and an educational center are also housed in the building, and both are public. The educational center seeks to enlighten local residents and tourists as to the water traffic strategies currently deployed in the area, and the ways in which these strategies fit within the country’s larger framework for water traffic control. Capping the entirety of the office’s roof is an elongated terrace–accessed only by a hydraulic door, set within the glazed roof of the void–which seduces with its panoramic views onto the ever-flowing waterways, and, in the distance, the bucolic countryside. 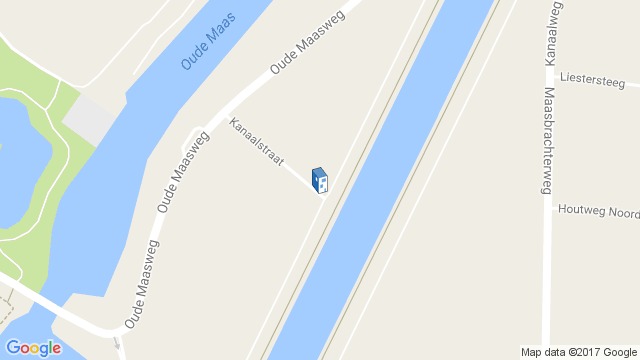