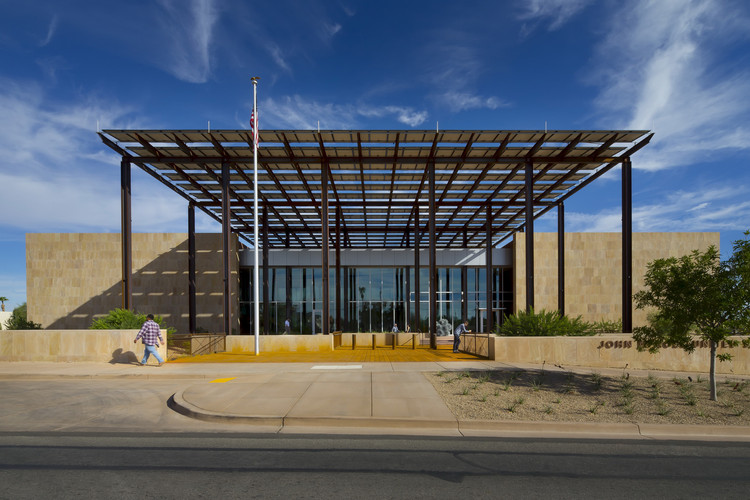 The Courthouse fulfills all these requirements, delivering high value within a design-build fast track schedule. The Courthouse’s grand design gesture is its canopy of photovoltaics, held up by a series of naturally weathering steel columns, which shades the entrance plaza. The principal façade is composed of flanking sandstone masses inset with a double-height glass lobby. The juxtaposition of stone and glass contrasts a magisterial sense of permanence with lightness and transparency, conveying the balance of precedent and openness in the American justice system.

Known as “the sunniest place in the U.S.”, Yuma endures temperatures of 120 degrees in summer with 3 annual inches of rainfall. Pending LEED Gold certification, the Courthouse’s sustainability strategy integrates three principles into the design: harvesting the abundant solar energy on-site while minimizing energy usage; utilizing materials that save energy and money long term; and conserving water.

Effective passive solar methods include the use of light-colored Arizona sandstone and brick, which are durable and impart thermal mass. Deeply-inset windows on the east and west facades are protected by “living wall” sunscreen trellises with climbing vines that modulate sunlight. Solar thermal collectors provide more than 30% of hot water requirements. Energy-efficient equipment and light fixtures are designated throughout.

The Sonoran desert is woven into the landscaping at the entry plaza and perimeter with native drought-resistant plants. Yuma’s historic bridges are referenced by an entry procession of weathered steel bridges spanning a landscaped arroyo, a stone plinth and a series of staggered stone site walls. Water retention basins with a 29,000 cubic ft. capacity collect storm water in the arroyo, which percolates into the ground, keeping pollutants out of rivers. A drip system irrigates with maximum efficiency.

President Barack Obama signed legislation naming the new courthouse after Judge John M. Roll, Arizona’s chief federal judge who was killed in the 2011 shooting that wounded Congresswoman Gabby Giffords. A strong advocate of the Courthouse, the Judge had served on the design-build selection jury. “The Southwestern flavor of this concept retains the dignity of a Federal Courthouse,” he wrote. “It is a great fit for the immediate area, particularly as positioned. The front entrance is prominent and inviting. The veranda shading is innovative and practical.” 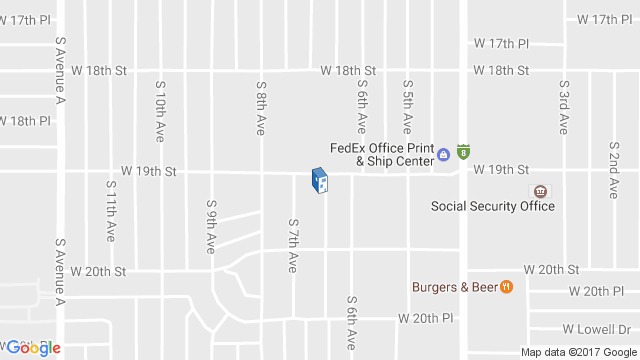