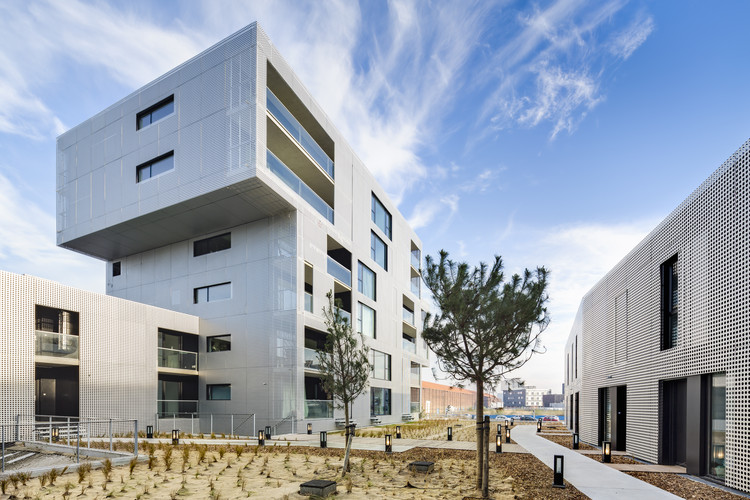 Text description provided by the architects. Located in the Docks du Havre (76) area, this private ownership, 65-unit congregate housing project renews the venue’s gradually disappearing authenticity. It highlights a few snatches of the old, e.g. this small corner-building that the new building encloses, while expressing its contemporaneous signature with concrete and metallic casing. Following on an initial housing project on the same site, this latest project continues the idea of varying housing types: town houses, stacked dwellings and congregate housing, all of which comes together on three visual levels with unified metallic casing that magnifies Le Havre’s maritime light. Very near the Bains des Docks, designed by Ateliers Jean Nouvel, the terrain is located in Le Havre’s port area across from the Vatine wet docks. To give the architects direction architect/town-planner Bruno Fortier developed a dialectic between «heavy» and «light» while the project specifications maintained certain historical notes that hallmarked the past and kept it from becoming just another modern commercial development.

Four years after initial work done on this venue by the agency, the watchword remained the same, i.e. bring out the local industrial past by accenting its rough material aspects through the use of concrete and metal. A small corner building has been preserved on this site, making it a reference to the past while still part of a very modern design project. But the real booster of the project is its seascape views and the commercial port. The project had to rise. Overlying a high water table, the agency had to put parking garages, businesses and community areas at ground level on a concrete pedestal that automatically lifted the project into the air. This base weds the shape of the preserved corner building. So as not to bury this historical landmark with dominating surroundings, the encircling building heights were lowered and harmonized with its shape. The base then extends gently upwards to raised gardens.

The program encompasses several formats: from studios to 5-room flats, from town houses to small congregate housing with many permutations in-between. The whole is unified by winding pathways in the central garden that enhance conviviality among residents. Both streets are highlighted by six-storey congregate housing buildings. On the dock side there is a low-lying path connecting the existing building to the intermediary housing and two residential floors accessed by passageways. The garden is ringed by town houses. The housing is accessed in several ways: elevators and stairways from the street or the different parking garage levels and hallways and verandas to welcome residents to the intermediary housing. This diversity of access and the varying scales lend the project its highly urbanized style.

The compact plots of the congregate housing are based on a simple principle, i.e. two small units around a central core are framed by two bigger units (3 or 5 rooms) gable-fashion. The biggest units run from right to left and vice-versa every two storeys, creating a staggered, three-layered, stacked facade that affords maximum views. Starting with the three-room units, each enjoys a terrace or a recessed balcony, with the 4- and 5-room units having two. The unit interiors are organized simply with day living spaces (living room, dining room) and night space (bedrooms) surrounding the technical area that includes kitchens and bathrooms.

The project’s volume mass and simplicity contrast with the envelope’s lightness, which is especially sophisticated given the program it encompasses. The outside insulation over the bare concrete is protected by a first sound- and water-proof skin to which the metallic cladding is attached. This called for very precise layout and implementation. The regular perforation pattern is repeated identically on all facades. The recessed balconies can be hidden by sliding trellises—a permutation of the bedroom shutters—that disappear behind the cladding. From the outside the building thus reflects the sky and its surroundings. 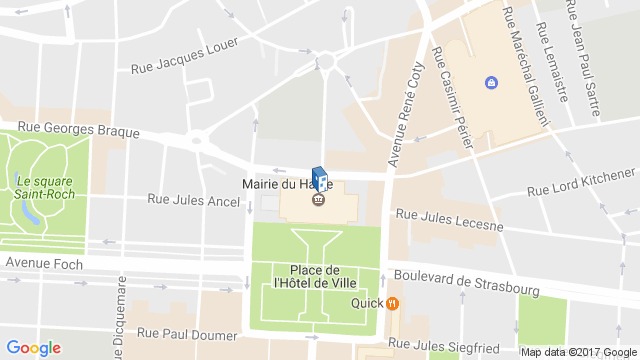