Drawing both literal and theoretical inspiration from the Islamic Holy Book, Rafael de La-Hoz Arquitectos earned an Honourable Mention for their design proposal of a habitable natural oasis for the Noble Quran International Competition in Saudi Arabia.

Understanding the significance of the location’s proximity to Islam’s second holiest city and the Capital of Islamic Culture, Rafael de La-Hoz aimed to create a memorable and iconic Islamic Landmark. Therefore, the Quran itself was chosen as the primary source of physical and contextual understanding, the most significant vessel of knowledge for the people and the location. 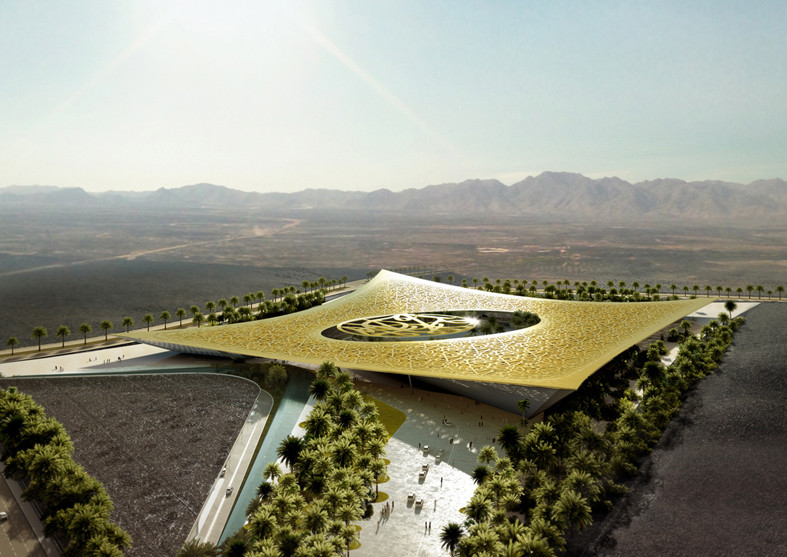 By delving into the Quran’s teachings, the firm found that there are no architectural typologies referenced in any of the 114 surahs, or chapters. Rather, there is a repetition of the concept of Oasis – the Quran’s multiple descriptions of Heaven include vivid descriptions of lush gardens, shaded areas, and cooling fountains and streams.

In Islamic societies the Oasis is a heavenly metaphor of sorts, a source of nourishment, safety, comfort, and survival in a harsh climate. Thus, the firm decided on a concept of “no buildings, no gardens, but the oasis as the elemental architecture that arises directly from the Quran.”

Furthermore, quite literally taking a leaf out of the Quran, Rafael de La-Hoz designs the form of the structure as a page of the Holy Book, lightly hovering above the landscape. Following the teachings that the Quran may never touch the ground, handled only by hand or placed on a base of some sort, the roof element curves gently upward at the edges, and rests on the four buildings which compose the overall master plan. These four buildings reflect the role of the human hand in support of the holiness of the Book. The roof provides shade and comfort across the site, inviting pedestrian activity and heightened outdoor interaction, a rare commodity in the typical harshness of the climate.

The central core is a natural oasis and space for reflection. Landscaped with soft greenery and the cooling touch of water, it is both a place of peace and internal solace as well as physical comfort. Providing various points of outlook throughout the site, it further reinforces a sense of curiosity and desire for knowledge, another central tenet of Islamic teachings. The core extends upward as a break in the solid roof element. Representing the circular core present in most contemporary covers of the Noble Quran, the structure fragments delicately into vectorized calligraphy, an abstracted rendering of a hadith, or saying of the Prophet Muhammad PBUH (Peace Be Upon Him). This opening allows for sunlight to cascade throughout the site while maintaining the beauty of shadow play and temperate climate control.