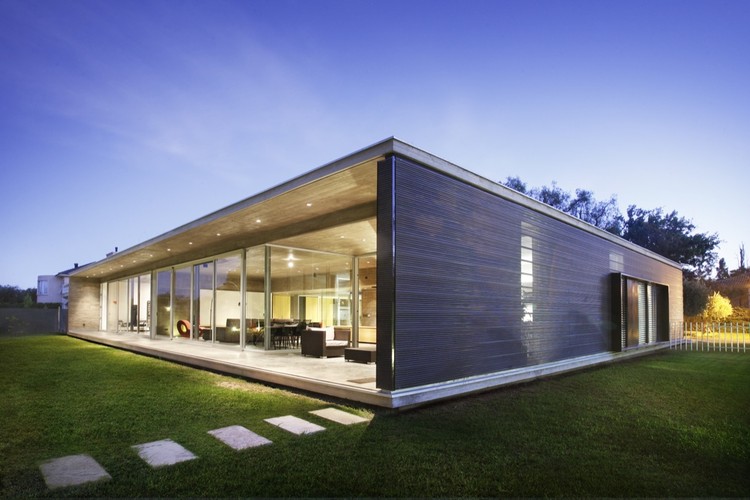 Text description provided by the architects. The house is situated on a flat land of 1,500 square meters in a residential area within the city of Mendoza, Argentina. A typical continental climatic zone, with large weather amplitudes between stations where natural breeze comes mostly from the South.

The project is an opportunity to rethink the suburban houses facilities in emerging environments in contemporary Latin American urban spaces. Trying to understand the space as a stimulator, suggesting sensitive geometries that optimize weather conditions and operate from green conscience.

The house is all around an interior central courtyard, opening the main spaces to a large lateral garden. These spaces are organized in a north orientation, gaining direct heat by solar radiation, the smaller and private spaces, are oriented to the east, leaving the services areas to the west.

Due to the natural movement of air masses, the volume of air in the central courtyard rises, because of temperature, causing environmental benefits of the garden perimeter through the interior spaces of the house.

A series of elements support this strategy by bringing the south breezes and achieving a natural acceleration that support the whole system. The same device is used in the central courtyard from a small opening in the concrete wall.

The big concrete wall that emerges from the central courtyard, with the fundamental mission of protecting the house from solar radiation from the west, also ends by opening the access area. To protect the west façade, a micro perforated aluminum material was chosen to ventilate it. The same material was used to design the main façade of the house.

The result, is a project full of contrast, where the dramatic scope of access, from where you can only see ground and sky, faces to an open and deep interior space, where multiple instances can be understood visually, where everything seems to be simultaneous in space and time ...

The materiality of the project is dominated by a structural concrete exoskeleton made with light pine planning boards, reaching a sutil and severe expression. The micro perforated aluminum material of the main façade changes its expression depending on the lighting conditions. The flat polished guatambú wood, the black boards doors and other materials, contrast with the main structure. 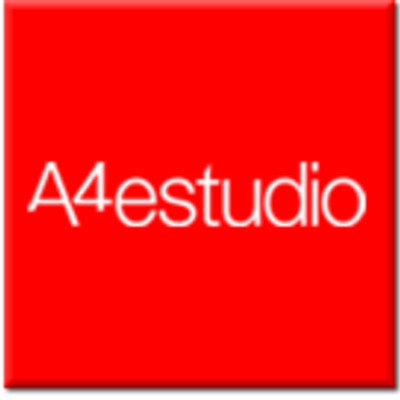 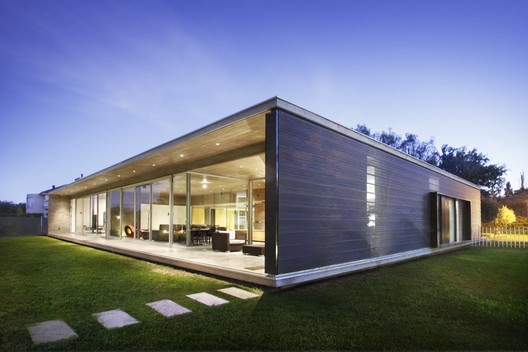