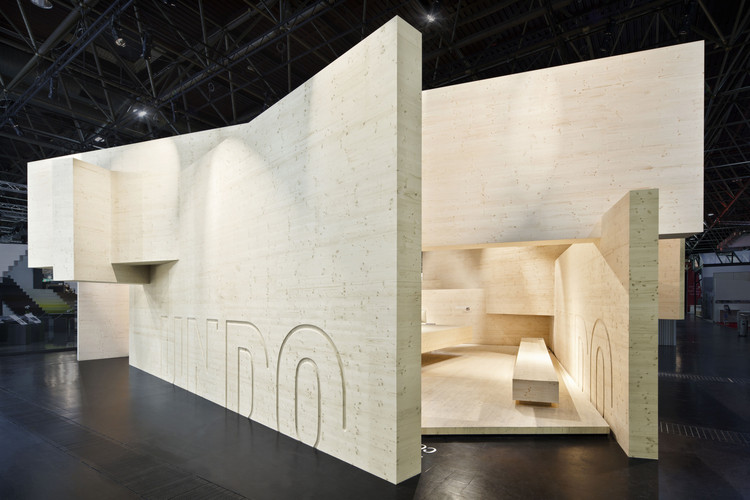 Text description provided by the architects. For the 8th time in a row the creatives from Neuss present themselves at the leading international fair of trade in Duesseldorf in hall 10 A42 from 16 to 20 February 2014. "undo" is this year’s motto for the 247 square metres large corporate appearance. It visualizes the process of design by means of a media exhibition area. The creative agency sees the fair’s motto "undo" as a creative and constructive principle that is characterized by trial and error, by unravelling and overhauling, by constant revising and changing, by mental pauses. At the EuroShop 2014, the agency for spatial communication from Neuss develops a compelling fair concept rich in words and sense that offers visitors the key to the creatives’ mind and work by means of media contributions.

The cross-media exhibition concept finds its localization in a spacious wooden architecture: an assemblage consisting of oversized building stones from light-coloured untreated pine wood rises 5.60 metres into the space. The architecture’s unfinished character adds a tri-dimensional equivalent to the design topic "undo". Visible from afar an oversized typography, which is milled into the architecture communicates the motto "undo" into the hall.

Fair visitors enter the exhibition area through three entrances that are cut into the wooden building stones and immerge in the almost sacral wooden architecture. It protects the exhibition area from the exterior and adds to a calm atmosphere in combination with music played in the background. Inside the architecture, a multi-media exhibition, which starts in the centre, welcomes the visitors. A huge, seemingly suspended wooden table provides numerous tablets for the visitors, which allow them to decrypt the exhibition codes on the walls.

As an introduction to the exhibition topic there is a typography as high as the space itself. It contains “augmented reality” sequences that make the content-wise dimension of the design principle “undo” tangible. The term “reveal” for example shows an animation of variably mixed wooden building stones that only makes sense in the rewind mode. The foreseeable and unknown only shows in the conflicting interplay between construction and destruction – that’s the creatives’ message. After the introduction to the topic, there is a path consisting of 9 key words along the wooden architecture: A collection of entries in word books, animated drawings, film sequences and project works creates the link between the motto "undo" and the works of D’art Design Gruppe. "Modify" for example alludes to the momentum of permanent change: One brand, one stand area, one fair, two appearances per year. To always perfectly accoutre the brand adidas with a new brand architecture is a challenge that has accompanied D’art Design Gruppe many years: In a creative draft hidden in the term “modify” there is an accumulation of Bread&Butter concepts that D’art Design Gruppe has developed for its patron.

The exhibition series is complemented with film sequences around the design agency: The subsidiary D’art Design Seoul founded in 2013 is presented in a film documentation just like the 50 headquarter’s team members in Neuss. The exhibition concludes in the wooden architecture’s centre, but it is here where talks and direct contact start: Inspirations and talks can be pursued at the oversized table in a relaxed atmosphere. And last but not least, visitors can experiment freely according to the principle “do and undo” and give free rein to their creativity by means of thousands of building stones. (End of the text: signs 3.704) 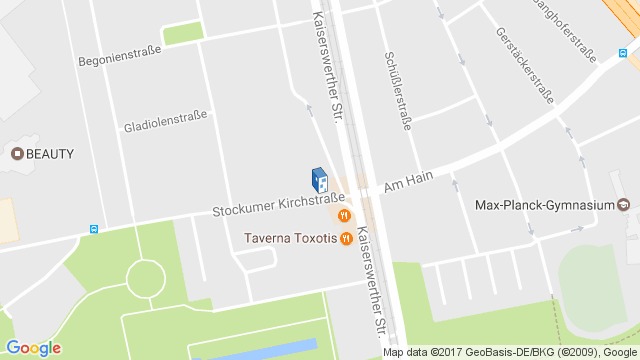 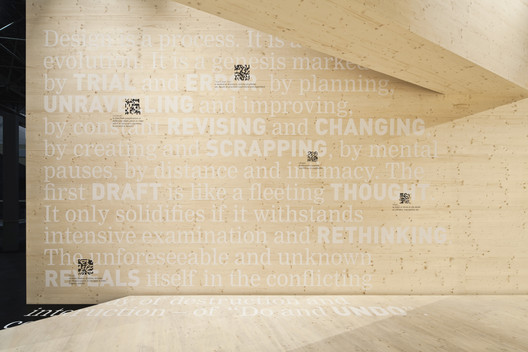