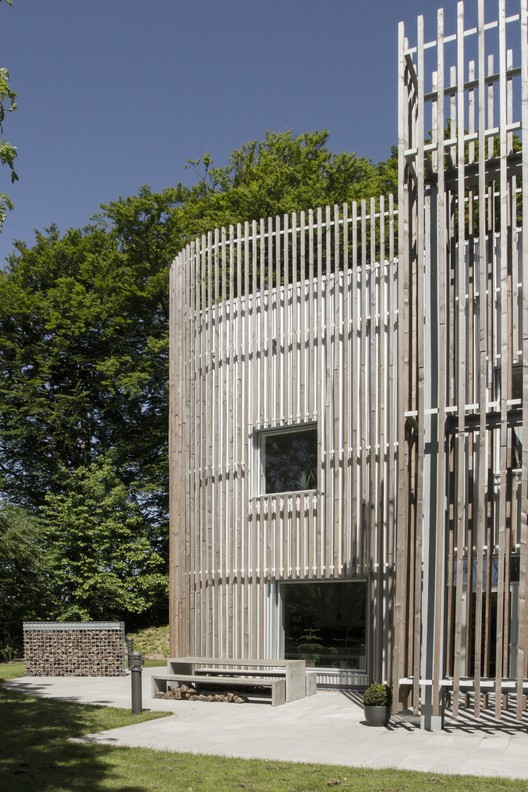 Text description provided by the architects. Livsrum is a house made in harmony with nature. Shaped by the terrain, covered by the woods and getting its hue from nature. It borrows the qualities from the surrounding environment and passes them on to the users of the house.

The house looks like it has grown out of the plots characteristic slopes and has inherited its soft organic shapes from the landscape. It gives both an inviting and dramatic appearance. From a distance it stands out as something unusual. The soft design and warm colours of larch tree is in close dialog with the green backdrop of the forest. Together, they stand in contrast to the hard concrete of the neighbouring hospital.

At close range the house scale down from one block to a four-part structure. Both in depth and height the four blocks are distinct. It reveals a house broken down into smaller parts. The niches created by the offset of the blocks are generating body scale spaces that invite users to inhabit the sunny and protected palaces along the façade.

In elevation the vertical wooden slats make playful shadows on the bright aluminium and add a sense of depth to the façade. When you look along the façade the experience transforms into that of a total wooden building. This play between open and closed, wooden and aluminium generates a building that changes all the time depending on the angel you experience it from. This makes a vibrant and ever changing house.

The forest and the trees follow the user into the house. The slats are visible through the big windows and the natural colour of the wooden ash floors and solid pillars gives a warm felling to the space. The central double-height common space receives natural light from all corners of the world. The light changes with the moods of the weather, the sun's position on the sky and all four seasons.

The interiors are decorated in bright friendly colours. The space continuously changes nuances depending on light intensity and colours of the nature outside.

The green and brown hue of the forest are mixed with the characteristic Scandinavian light. The low evening sun shines through the treetops and paints the tall south wall in golden tones. Livsrum is based on the ambition of the Danish Cancer Society to meet the users as human beings and not as patients.

The plan has been organized for the spaces to feel casual, almost carefree, allowing one to feel at ease and almost at home. Considering this is a house for everyone and to meet the many different perceptions of home, the house is organised around daily rituals that we all know from our home: The informal coffee in the kitchen, the dinning situations around the family table, the relaxation in the couch or by the fireplaces. Each ritual got its own intimate recess around the big common space. This blends the felling of privacy with the felling of not being alone and gives a sense of community. 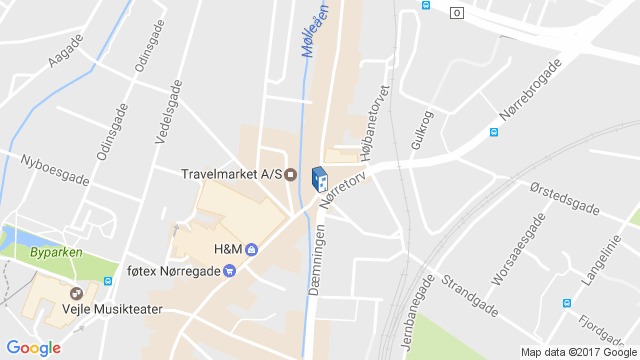 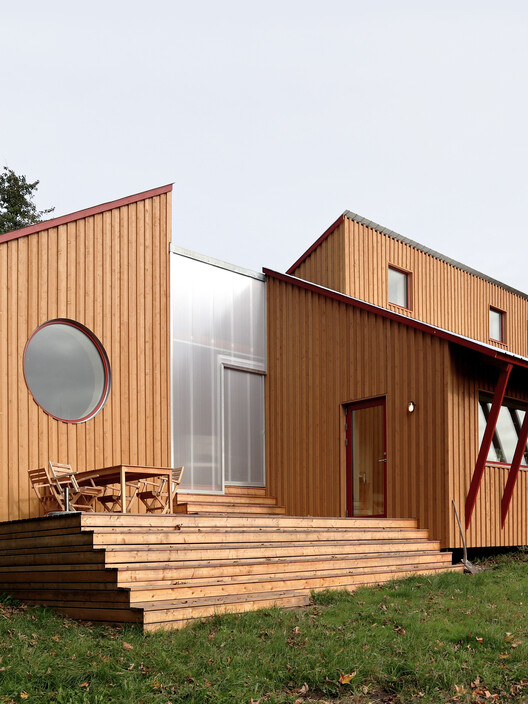