The project is the result of a shorlisted competition. Along with Brisac Gonzalez, Alain Safati, Henri Gaudin, and Agence Sequence were shorlisted from an expression of interest that drew 57 applications.

Aurillac is at the edge of France's Massif Central mountain region. The site is a large paved field - not quite a plaza, not quite a parking tarmac - is situated near the city's main train station. This area is under regeneration to provide a stronger link with the city's historic centre.

The building is 5265 meters square and was built for € 8,500,000.00 euros. It is a new venue for theatre, concerts, fairs and sports events. It contains retractable seating and demountable stage for versatility. The main space can accommodate up to 4500 people during performances.

As it is never permanently inhabited, the building is essentially a chamber for ephemeral events.

It is an instantly recognizable object. Three ribbons of concrete that vary in height and texture define the building. The ribbons delineate the different zones of the building: entry, hall, storage and back of house facilities. Their play also creates a series of residual spaces that contain services machinery and technical access.

Inside, a twelve-meter high ribbon defines a rectangle that is the hall. The hall is column free, measuring forty meters wide by sixty meters long. Externally the upper ribbon is made of prefabricated concrete panels with a regular grid of glass bricks.

During the day, the sunlight plays with the 25,000 bespoke pyramidal-shaped glass bricks, producing glimmering effects and dramatic shadows. In the evening the building awakens as the Fresnel lens-like surfaces of the glass bricks amplify the intensity of the coloured lighting scheme, producing a glittering facade. The façade's colour lighting scheme can be altered enabling collaborations with the spectacles inside.

The lower ribbon is six-meter high and made of in situ concrete. The undulations of this wall define the entry area and loading dock.

Like stage scenery or a flamboyant costume, the building is meant to be seen from afar. The majority of details are simple. It is by default a very robust building - a resilient structure that requires little maintenance. Within the hall, articulated lorries can drive inside; delivering performance and catering equipment or trade shows displays. At the same time, the assembly or disassembly of stage and retractable seating can occur.

The backlit glass bricks enrich the appearance of the building at night. We also wanted an animated façade during the day. Since Aurillac has a large number of sunny days, we thought that a three dimensional shape would shimmer during the day and play with the sun's rays. The curvature of the facades along with the pyramidal shaped glass bricks creates a variety of interesting shadows.

We studied several shapes and finally decided on the pyramid along with the manufacture. The pyramidal shape refracts the coloured light behind them as well.

We studied integrating LEDs, but with 25000 glass bricks the building budget could not cover the control system for this many lights. The glass bricks are simply backlit from sources at the top and bottom of the facade. The lighting scheme can be programmed from a total of 24 different circuits where the façade can be lit in one colour or eight allowing for coordination with the lighting scheme of the performance inside.

The lighting in the foyer consists of flush mounted downlights in the ceiling. The green tint of the concrete floor is reflected onto the white ceiling. 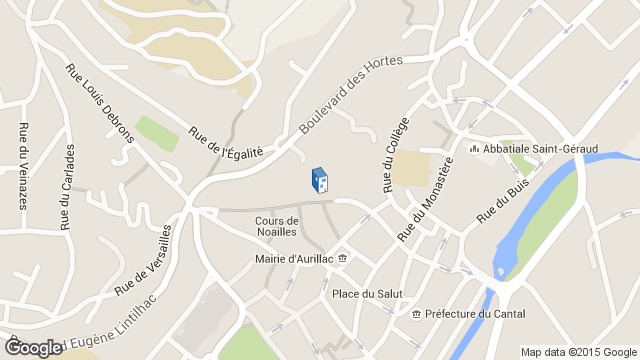