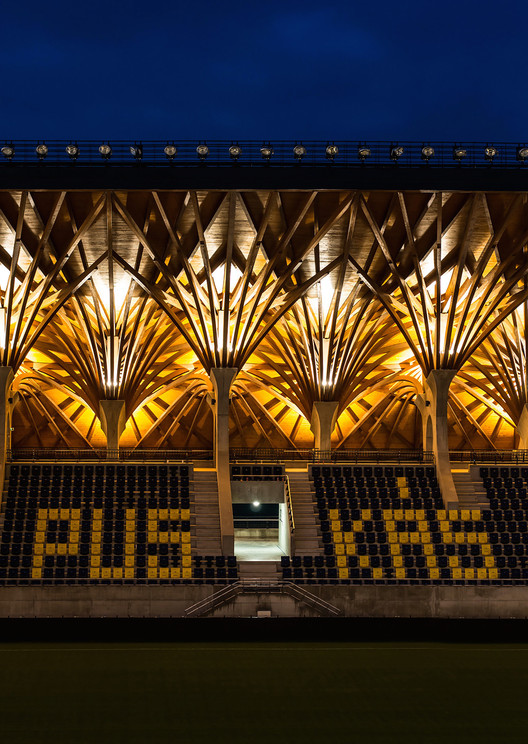 Text description provided by the architects. Felcsút is a community of 1800 souls in the Váli Valley, 40 kilometers west of Budapest, the capital of Hungary. Since 2004, the locality hosts the largest education center for aspiring young footballers in the country; an institution named in 2006 after one of the greatest football legends in history, Olympic champion, European Cup winner and World Cup silver medalist Ferenc Puskás.

Ferenc Puskás was the captain of the legendary "Mighty Magyars", a team perhaps most famous for thrashing England 6-3 in Wembley in 1953 in what was to become known as "the Match of the Century". Later on, he immigrated to Spain and he continued to delight the fans with his skills for another decade as a player for Real Madrid. He was also a three time winner of the European Champion Clubs' Cup, the predecessor of the Champions League, and a four-time Spanish league top scorer. He worked on all continents, from Australia to Chile, from Canada to Saudi Arabia or Greece, and wherever he went, he quickly earned adoration for his gentle, cheerful and generous character.

Pancho, as nicknamed by his teammates in Real Madrid, had an outstanding knack for developing young talents. By taking his name, the Football Academy made a point of continuing this noble pursuit; a promise they acted upon when constructions were started in 2008.

The first building of the complex to be finished was the dormitory. Centered on the reconstruction of a former noble residence, the work was based on plans by Imre Makovecz, the central figure of Hungarian organic architecture. This was followed by the inauguration of the professional and medical center and later the canteen of the Academy, executed by the Master's disciple at the itinerant school, Tamás Dobrosi.

The idea of a roofed arena was born after the successful construction of approximately 8 grass and arti-ficial practice pitches. Daring to dream even bigger, the management of the Academy decided to build a UEFA category III football stadium suitable for hosting Hungarian league matches and junior tournaments as well as any kind of international competition up to the second qualifying round of the Europa League and the Champions League.

As opposed to the gigantic complexes preferred in the first half of the last century, some of which were capable of hosting more than a hundred thousand enthusiasts, current trends point towards smaller, but more efficient and complex recreation facilities.

Considering that serving a large urban agglomeration was not among the priorities for the future arena, because it was to be used as the main pitch of a boarding sports academy, the management decided in agreement with the UEFA delegates that the number of seats would remain relatively low at 3,400 while offering greater than usual comfort. With a 100 cm distance between rows and 55 cm between seats, the stadium matches the level of comfort of business class sections in Western European stadiums. Reserved for special guests, the 420-seat VIP section echoes the more intimate and cozy atmosphere of the Academy's existing buildings. Seven lodges on the second floor of the west wing offer full comfort for the main sponsors while press correspondents are served by five TV and radio commentary positions, a press conference room capable of hosting 50 people, a 70-seat media tribune and several studios equipped for high quality live broadcast of any sporting event.

Although the arena occupies more than 12,000 square meters, all of which fitted with heating, the space still proved to be rather tight to host all necessary facilities. Except for the area below the northern and southern tribunes protruding over the pitch, all the space is built in. Making good use of the properties of the terrain, the building is served by exits communicating directly with the outside world on three different floors. The changing rooms of both the home side and the visitors, complete with their own adjacent warm-up rooms covered in artificial grass, were designed in full accordance with UEFA provisions, containing facilities for trainers, referees and doping control officers as well. On the basement level, further 12 locker rooms, a gym and a health center are at the disposal of young footballers. These can be ap-proached from east through separate and monitored gates. Fans are admitted from the north and south on the subground floor, with separate gates leading to different sectors, through clearly indicated open and roofed spaces.

Beyond general requirements for orientation, the existing buildings and pitches had a defining role in designating the exact site of construction. The terrain, with its 8-meter inclination, was yet another challenge to be overcome. The lowered pitch made it possible to build a lower facade on the western side. Here, the relatively narrow space is further divided into smaller chambers by elements of the protruding roof structure which are running into the earth between the domes of the foyers. Separate gates to the VIP and media rooms as well as the players' entrance are located on this side, connected by the inter-locking structure of rooftop domes.

The sponsor was firmly determined to apply the concept of Hungarian organic architecture to the entire building complex. He wanted to create an eye catching trademark piece of architecture with unique appearance, outstanding even in international comparison. Thus the use of special and uncommon mate-rials was not only a mere whim, but an express requirement.

Sprouting from pillars of reinforced concrete, the lattice wood roof is spread out over the tribunes like the canopy of the tree line around a clearing. The underlying concept was to build a structure which is unique and exceptional due to its own inner logic and clean static system, integrating the rational tendency of contemporary Hungarian stadium architecture with more complex forms and structures in an innovative context.

Located in a rural environment, the facades are necessarily monotonous as they cannot be observed from afar. Thus the architectural emphasis is on the disruptions of the roof structure over the entrances and the dynamism of the internal space. Openings in the front wall provide intimate insight for outside observers into the inner space of the arena, giving a taste of the heroic endeavors played out on the "clearing".

However, the constructed environment is but an aptly chosen stage for the professional work carried out at the Puskás Academy. If due diligence and progress is shown, any Hungarian youngster has the chance to study for free in the academic and football center which is already sending newly discovered talents of all age groups to play in the national teams.

In the meantime, developing successful football players is not the only objective of the management. The ultimate driving force behind the activity of the institution is inspiring young people to stand their own in other spheres of life as well.

In line with this idea, Pancho Arena, and the constructed environment in general, should serve the community as a benchmark and a source of pride to provide additional incentive for hard work and diligence, in the footsteps of role models of the past. 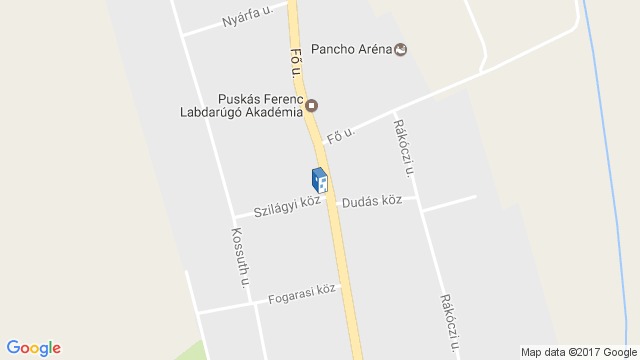