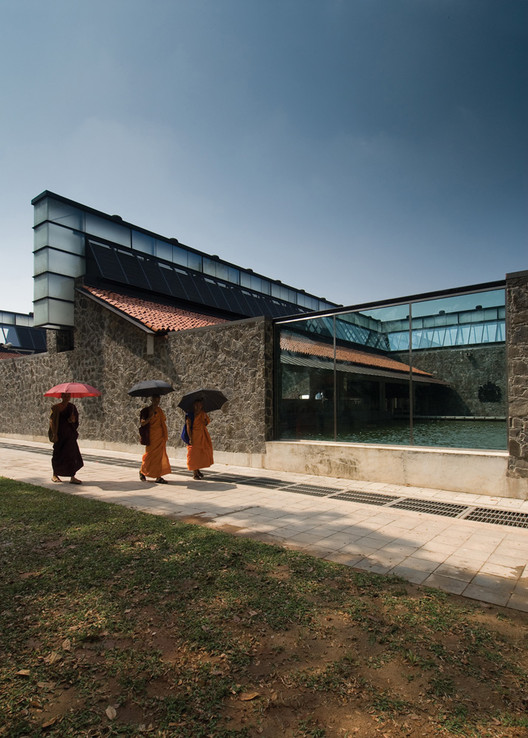 The social function of a High Commission building is much reduced from the popular image of a 19th  century Embassy and the emphasis of the design is on making a pleasant working environment for Commission staff and for allowing for future flexibility and the re-arrangement of departments. The security brief for the building was of paramount concern, and the building has been designed against the threat of external bomb blast.

The site sits on the corner of two prominent roads lined with mature trees in Cinnamon Gardens, a pleasant inner suburban part of Colombo. There are two main entrances; a vehicle and pedestrian entrance on one elevation leading to an inner court, porte cochere and entrance lake; and on the opposite corner of the site a visa and consular entrance (the conflict between the two functions had been a major problem on the previous site.) Guard houses which are extensions of the roof of the main building are located at each entrance.

Unusually for a High Commission or Embassy building, the design is single storey. The building is arranged around a series of small and intimate courtyards with the starting point being the possibility of empowering the office workers to switch off the air conditioning, open windows to the courtyards and induce a breeze through their offices through a thermal chimney operating down the middle of each “leg” of the design. The glass chimney also admits light which is reflected upwards onto the polished underside of the concrete vaulted roof structure. The offices are a arranged with a general open plan “spine”, with various Departments placed in individual legs of cellular offices off the central spine. Compared to the previous six storey building this is a radical improvement in inter-staff communications. The public areas of the building are limited to a conference room which opens onto a small courtyard for social functions and the trade section which has its own entrance from the entrance courtyard. A ‘club’ with swimming pool, tennis-court, garden and children’s’ crèche for staff members and their families has been located along one boundary.

The design is deliberately self-effacing as is considered appropriate for the former colonial power. Water is used extensively for pools, lakes, fountains and weirs and this together with the courtyard idea is inspired directly by traditional Sri Lankan architecture, also more recently reinterpreted through the work of the late Sri Lankan architect, Geoffrey Bawa. Each courtyard has moving water within it and our concept is that there should not just be a variety of landscape experiences but also that there should be a different sound of water in each court. At night the pools are lit in a variety of ways and the glass chimney glows as a series of giant lanterns along the boundary wall.

Wherever possible local materials have been used, most notably the roofs covered with traditional Sri Lankan terra cotta tiling, the coconut timber wall panels and the granite dry stone ‘kalugal’ walling. Splashes of colour occur on inner boundary walls, a small homage to the Mexican architect Barragan as well as to the intense colours found in all aspects of Sri Lankan life. The structure incorporates heavy roof vaults of in-situ concrete but spanning great distances and thereby minimising columns and allowing for great flexibility in reorganising internal partitions.

After the initial competition win and a year of intensive work in 2001, the project was put on hold by the FCO in response to an internal review of projects. Four years later, however, the project was revived and following design amendments to a revised brief the project was let as a design-and-build contact in May 2006. The building was formally opened in May 2008 and High Commission staff moved into the building shortly afterwards. 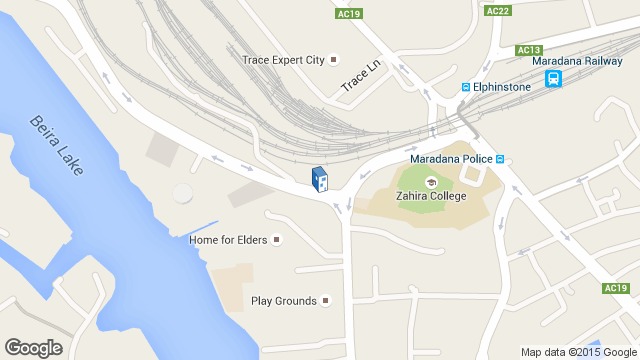