Text description provided by the architects. The Akmani Legian simply stands as an “Iconic Passage” for Kuta, especially in Legian area. The design intention is to link the Legian Street in front with the Banesari Street behind. This issue derives from the local life style which is familiar with lively pedestrian, both during day and night.

The site is very unique, with only 5 meters width of opening both from the Legian Street and Banesari Street, but very spacious in the center area. The design states vigorously to attract public from the streets to come in. Not only to have enjoyment in the programs, but also to let them walk along that “Iconic Passage” as an opportunity for the public to move more flexibly around Legian area. The spacious center area is used as a courtyard which also acts as the view orientation of the surrounding. The mass in the northern and southern part of the land is then raised. On top of the northern part is the Roof Garden Lounge which also becomes the public mingles point, while the southern part is used for Villas. The spaces under the Roof Garden Lounge and Villas are then filled by building mass of Guest Rooms.

The circulation journey starts with 5m width entrances which bridge the lively main streets with the more serene Lobby area of the hotel. The circulation is then directed towards the Roof Garden Lounge where people can enjoy the view of the Kuta Beach. While the northern part of the building is open for public access, the southern part of the building is a more private area for Villas.

Natural sunlight and natural fresh air are also important in the design process. Because of the geographical position of the site is located at slightly South of the Equator line, the sun path direction comes from the South. The mass in the Southern part is cut off to maximize the amount of the sunlight into the courtyard, in the same time creating a theatre like space to attract the public towards the building.

The material used in the design is chosen to promote the usage of local material. Some local materials used in the projects are Kerawang Brick and rustic wood, combined with clear glass and greeneries. Kerawang brick is a ventilation brick with local pattern. This usage of local material is developed with new method and technology to create a new form of pattern and looks. The example of the treatment can be seen in the façade at the courtyards. The shape of the façade outline is adapted from the natural environment in Bali, like mountain, hills, and building of local belief like Pure. This outline is achieved by using a steel plate frame to support the Kerawang Brick which allows the combination of few patterns into one new pattern creating a vibrant and dynamic façade with a light, see-through effect from the ventilation brick.

The use of the Kerawang brick also creates spaces that are open, allowing natural sunlight and fresh air into the building. Therefore, the public areas, for example Lobby, Corridor, and Restaurant are naturally ventilated. Upon the idea of “Iconic  Passage”, we elaborate the idea to transform the passage into an open and green feel to balance the whole design purpose.

To conclude, the design of the Akmani Legian emphasize on the local preservation, which is shown in few points. First is by presenting the idea of pedestrian walkway which is by adapting the pedestrian movement with the building circulation. Second point is by presenting green roof surface as the act of sustaining the natural environment. This green roof surface is to replace the existing green area that is used for the building mass. Lastly is the selection of material which promotes the usage of local material in a new treatment creating a building with a local tradition in a modern setting. 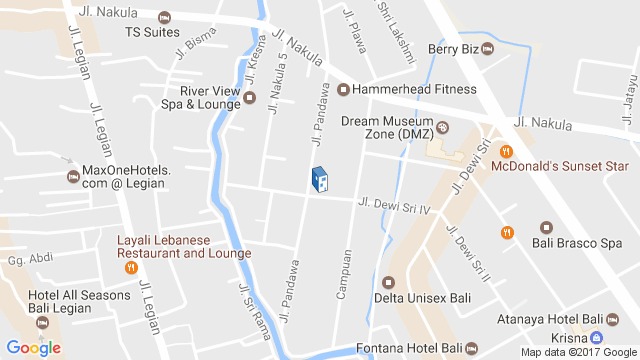 Location to be used only as a reference. It could indicate city/country but not exact address.
Share
Or
Copy
About this office
TWS Partners
Office
•••