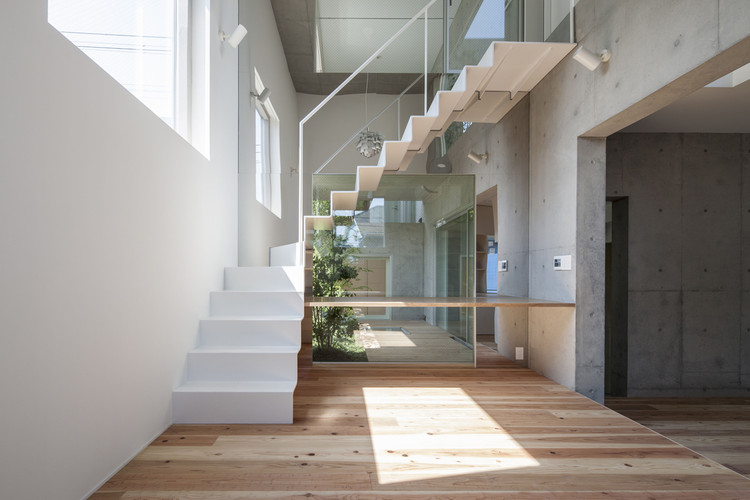 Text description provided by the architects. The site is situated amidst the densely packed residential area in Tokyo. Whilst being on a south west corner of the block having frontages to two streets, the elevated railway on the north posed issues of noise and vibration. The corner location offered opportunities for capturing light and air, but the contradiction was that doing so will call for mitigation of noise.

For people seeking a detached housing, it has always been a temptation to have a private garden to come with it. Many attempts have been made to allow for small piece of garden while extending the building coverage to the limit, but as a result, many have also ended up with curtains that are drawn all day long to shield the eyes from streets, which have become too close from the windows. Thus, rows of housings that are so unsociable become the standard city scene in the area, an obscene situation that had been thought to require taking measure for.

The house is for two households. In order to provide the required numbers of rooms which were comparatively larger, four stories, with each floor equally divided into six are created. Within it, rooms, as well as small courtyards are placed, while adjusting the height of floors in accordance with the required character of each room. Apertures are provided to interconnect spaces thus created.

By incorporating the courtyard spaces into the house in the same manner as rooms, sufficient depths are provided from the streets, successfully shielding off views without use of curtains even for the largest fenestration. The noise from the railway is also mitigated to the level that it is still audible but much less annoying. By treating the courtyards and the rooms equally, a house that is open yet closed to the city is created. 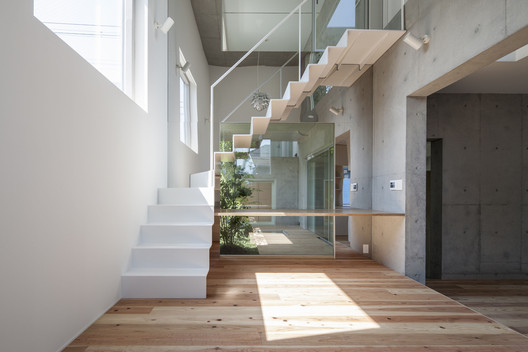