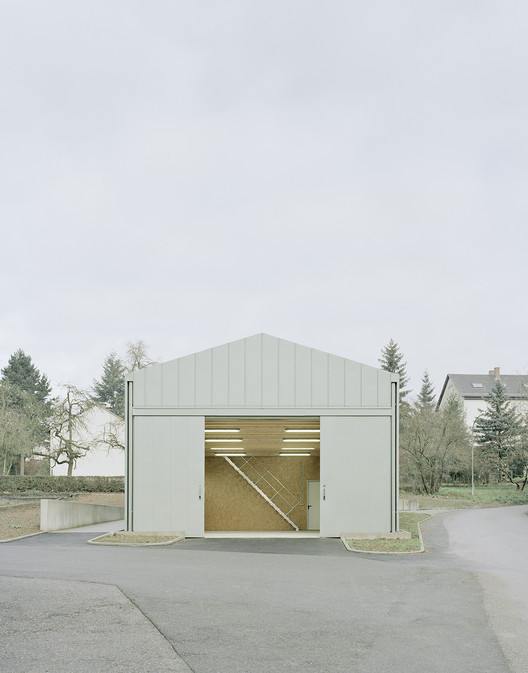 Text description provided by the architects. The setting of the building is a sloped site, bordered on one side by a road leading to a barn and a garden waste depository. The opposite side fronts the cutting and kitchen gardens, a much-loved feature of the ‘Sun Garden’ retirement home. The maintenance garage and storage building forms a barrier and a backdrop – the placement and size of the structure separates quiet environs of the gardens from the noisy agricultural traffic in the direct proximity of the site.

The salient architectonic feature of the ‘Hangar XS` is its folded roof, the geometry of which is defined by the triangular framing of the gables on all four sides of the building. The proportion of the gables are similar, and the ratio of the short to the long elevations is 2:7. A triangulated frame creates a ridge running perpendicular to the long façades of the construction, and due to the effects of perspective, 75% of the sloped roof is not visible from ground level. The net result of this geometry is that it is nearly impossible to gauge the volume of the building from any single vantage point, and the sloping ridges of the long elevations collapse the visually ‘deep’ construction at the building ends into a planar condition at the center of the structure.

Another ambiguity of the building form stems from the logistic complexity of a simple program distorted by a sloping site and varying requirements of access. Openings are located according to necessity, and there are multiple doors to single rooms due to functional dictates. They are sized by function because differing methods are used to bring material to and from the building. The differentiated positioning of the doors counteracts the simplicity of the box. Their placements are not random, but rather reflect a rhythm dictated by interior circumstances. The area of the symmetrical doors opening to the garage is the maximum possible opening width, and the dimensions of this pair are equal to that of the single sliding door that opens to the rubbish and recycling room.

The main façade stretches the entire length of the building without interruption. Fenestrations are large and few, with the ribbon window facing the garden stretching 12 meters in length to allow visitors a glimpse into the workshop and garage. The vertical divisions of the panes occur at three-meter intervals.Two windows of the same dimension in the east elevation provide daylight and ventilation into the upper-storey loft. With symmetrical gables on all four elevations, the simplicity of the silhouette, and the consistency of the whole, the construction creates a monumentality that creates a soothing, crystalline counterpoint to the activity and coarse appearance of the large barns and sheds directly across the street.

The character of the building, simultaneously alien and familiar, is reinforced by the use of a single cladding material for the entire construction. The walls and roof are timber framed and rest on a base of in situ concrete. The entire exterior surface is clad in green pre-weathered standing-seam titanium zinc. To ensure proper ventilation of the substructure, this metallic skin never touches the earth. It is suspended above the concrete foundation and hovers just a few centimeters above the ground. The resulting shadow reveal around the base of the building enforces the visual impression of a large, thin, taut surface, and contradicts the heavy structural members located directly beneath this cladding.

To contrast and balance the monolithic simplicity of the barn, doors and windows were detailed in the simplest imaginable manner. Swing doors are recessed to protect the edges of the door leaf from weather, and sliding doors were mounted atop the cladding to allow simple mounting and maintenance of tracks and rolling door hardware. Windows were set according to construction norms. The differing placement and depth of these openings lend a plasticity to an otherwise intentionally flat façade. Window sills, doorframes, and triangular vent hoods are made from the same standing seam metal. Square downspouts drain rainwater from a hidden gutter along the continuous perimeter of the roof surface.

The ‘Hangar XS’ is a study in duality. Inside, the plan contradicts the symmetrical consistency of the exterior form; outside, the fenestration of the elevations reflect the circumstantial distortions of the program within. 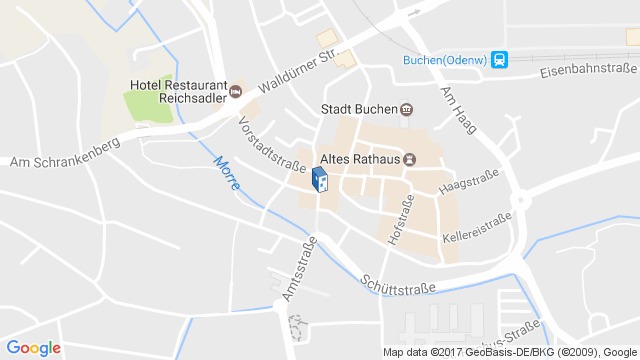