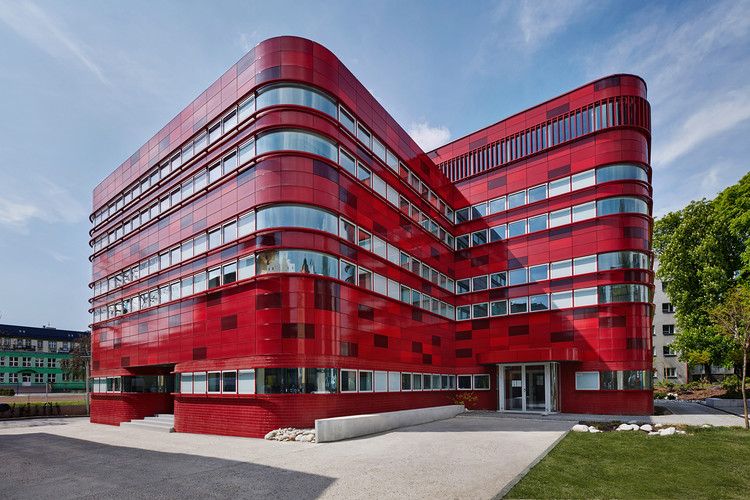 Text description provided by the architects. Investment divided into three phases, including (1) construction of the new Regional Blood Center building, (2) shelter for the mobile blood center [bus] and (3) the first in Poland specialized Center for Blood Cancer Diagnostics to be located within the existing building. At the moment, the first phase has been completed.

The first phase building houses modern cool rooms and storages, blood collecting unit, a complex of advanced medical laboratories and blood radiation laboratory, offices and conference center. Within the building blood is being collected, tested, processed to divide into blood elements and purified with the technology based on radioactive materials.

The building elevation is finished with ceramics, including small ceramic tiles on the ground level and glazed ceramic panels on the upper floor levels. The upper levels consist of more than 2000 ceramic elements. Among them 50x100cm flat panels, vertical blinds and (for the first time in Poland) curved panels of 145cm and 195 cm radius. Three different shades of red were implemented to create irregularity on the surface of the all four elevations. Ceramic pipes (TERRART®-BAGUETTE), placed at the uppermost level, protect the conference room from overheating as well as hide complicated and massive technological systems located at the roof level. These ceramic pipes add detail and make the enclosure lighter in its appearance.

The color scheme, the irregularity of the elevation leitmotif and the panel’s glossiness represent the richness of blood, often decribed as the gift of life. The geometry is inspired by the function of the blood center, the clash of biology with technology. Rounded elements represent biology, straight represent technology.

The intentional vivid color scheme of the elevation, making the building visually suprising to the public, calls attention to the idea of the blood donation. Application of the glazed panels is inspired by the local Silesian building tradition, which is present in the historical building facades with the glazed bricks.

The interior design is based on the colors used in the context of the facade. The stairwell placed in the building’s center, lit with the aid of natural sunlight, is finished with red ceramic tiles along the corridor.

Red color is present on floors and walls as an accent.

Most rooms are lit by two belts of windows. The lower window belt illuminates laboratory worktops placed along the outer walls while the upper belt, just below the ceiling, allows the infiltration of natural light to the remotest parts of the rooms. Thanks to glazed internal walls, the corridors are also lit with natural sunlight.

The building’s location is under the protection of the national historic preservation office. 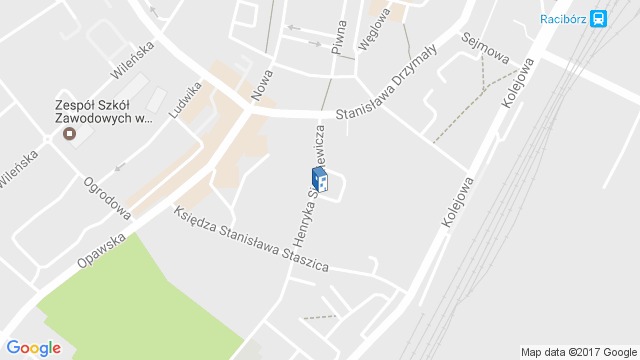