Save
Bekkering Adams Create Hanging Installation in Venice
Presented by:

Dutch practice Bekkering Adams Architecten, in cooperation with ABT and BeersNielsen, recently unveiled an installation at the Palazzo Mora, Venice as part of a collateral event with this year's Venice Biennale. Entitled Form-ContraForm, the sculptural piece reflects on the conceptual and human perception of space - something which they describe as "a space that surrounds and envelops." Distilling architecture's fundamentals (which is also the theme of this year's Biennale) down to the definition of co-ordinates in space, the experience created by Bekkering Adams is akin to the notion of "the mass versus the cavity."

According to the designers, "it is the intention to provide an experience that is not only shaped by the physical boundaries of space" but also "extends beyond the tangible." Within the exhibition space a floating cube of 2.4 metres is defined by 14,000 suspended balls, hanging from a wire grid of 10cm x 10cm. Within the cube lies a cavity in which people can enter and explore. The varying density of the "bullets" means that further volumes are visible "as if they were clouds." Furthermore, "the reflective surfaces on the floor provide an endless illusory space and give unexpected perspectives. Changing light projections, which react to the movements of visitors, allow the cube manifests itself in different colours, shapes and sizes."

The exhibition, which officially opened with the opening of the Biennale in June, was watched by the creators of the piece. "Of course we were curious to see if the visitors would actually undergo the intended experience and not just observe the cube, but really enter it in order to be surrounded by the 14,000 hanging balls. The effect of all these balls is extraordinary. Because of the different lighting and reflections in the mirror-foil on the floor, the balls are endlessly reflected."

Watch a short film explaining the making of the installation below:

You can visit Palazzo Mora to see this and other exhibitions until the 23rd of November 2014. The exhibition space is listed under 19B on the official map of the 2014 Venice Biennale. 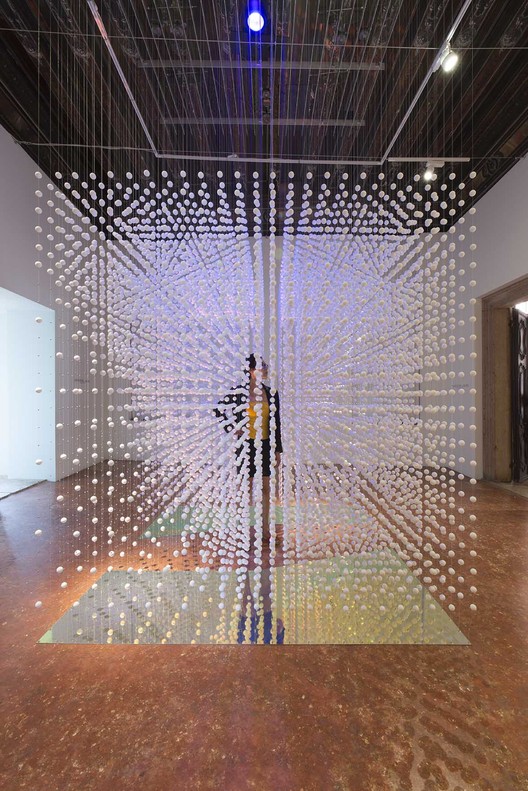