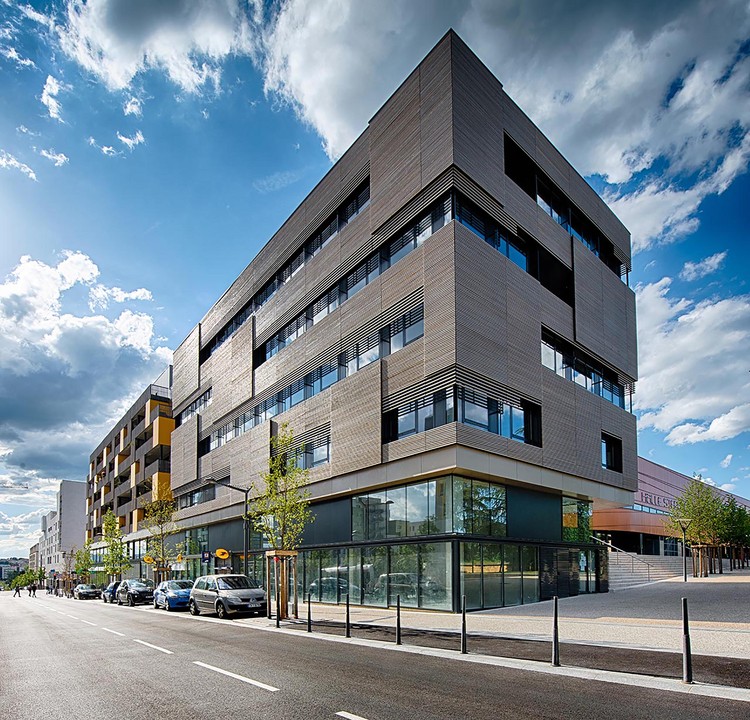 Text description provided by the architects. Block 32 occupies a strategic position in the vast programme to renovate the Duchère neighbourhood, in Lyon. The OPAC du Rhône housing association has produced a building which incorporates 33 social rental housing units, 1,500m2 of office space dedicated to health-related activities, and has retail space throughout the ground floor. Its central location, at the crossroads between the new Abbé Pierre square and the east / west boulevard, means it is highly visible and its proximity to the athletics hall imposes the need for a resoundingly urban attitude.

Following on from the architects’ work on the Mozart urban development zone in Saint-Priest, the intention was to meet the new challenges of the urban environment, promote the use of wood as a material and show that urban living can be pleasurable and fun.

Despite the technical complexity of the building, the architectural style is soft and joyful. A different architectural style denotes each of the programme’s components: social housing, the service hub (medical centre), and the retail space at the base.

Various factors relating to the site and the urban planning specifications mean this project has to strike an affirmatively urban posture. The proximity of the athletics hall1 is the main determining factor as the north facade of the housing block is less than 7 metres from the south facade of the sports facility. The scale and unusual shape of the hall make it a benevolent, but demanding neighbour. The focus was placed on developing the links between the new building and the sports facility. To the east, the steps of the square absorb the significant difference in height. To the west the communal garden, suspended above the shops, occupies the gap between the two buildings.

Block 32 acts as an urban facade, preserving the alignment along the road and marking the angles to the east and the west. This form is accentuated by the height of the building, with eight floors for the housing block and six floors for the office space creating a high-density ensemble. The shape of the plot of land is ideal for construction and offers advantageous north and south aspects. The significant height difference from east to west is absorbed by the unifying base that forms a pedestal for the project.

The programme, which adopts the now standard mixed-use approach, is itself an urban microcosm. The two basement floors offer 57 parking spaces. There is 972 m2 of retail space on the ground floor which constitutes the shared base for the 33 housing association flats and the 1,500 m2 medical centre.

In terms of style, the different components form a whole, a complete architectural work within which each of the different programmes remains distinct. The domesticity of the housing block is complemented by the more abstract design of the office block, while the retail space opens up readily onto the surrounding public spaces.

The ground floor and first floor which run the entire length of the complex form a glazed pedestal which supports the body which is composed of the two buildings separated by a discontinuity which opens up views onto the inner sections of the complex and the athletics hall. The base of the building effects the transition between the private and public space, with its very specific topography, characterised by a height difference of around 2.5 metres. Above the housing block, an attic floor set back from the main facade crowns the building, marked out by the use of different materials.

The construction systems used are also mixed, with materials used where they offer the best possible performance. The main structure is concrete. The facades are composed of a wooden frame.

The concrete was used for its structural and acoustic qualities. The wood was chosen first and foremost for its qualities as a material, but also for the way it could be used in the prefabrication of the components that make up the facade.

Two factors made it a particularly suitable material for this project. Wood compound walls offer the same level of performance at a reduced thickness compared to concrete compound walls. Across the seven floors of housing this frees up the equivalent of 60 m2 of living space. The use of prefabricated components also meant the building work could be carried out quickly and safely on a site with very specific constraints, notably due to the close proximity to the athletics hall. The north facade was built in just three weeks.

For acoustic reasons the light facades are separated from the flooring. They form a mantle wall which passes over the edge of the slab, producing a seamless envelope.

The housing block is deliberately slender, the depth of living space measures just 8 metres plus the balconies on the south facade, and with the addition of the external hallways on the north facade. This allows all the apartments to benefit from a dual north and south aspect, as each unit runs fully from one side of the building to the other. This exposure develops a generous relationship with the surrounding nature, the new square to the south, and the Monts d’Or to the north. The architectural intent is clear when the profile of the building is viewed from the western corner. The simple organisation of the housing units follows bioclimatic principles: living areas to the south; kitchen, bedrooms and bathrooms to the north.

To the south, generous, two metre-wide balconies offer attractive living spaces and protection from the sun. The windows are larger than standard and compensate for the compact interiors whose dimensions comply with social housing standards.

The facade is made up of multiple layers formed by a range of additional features: guard rails of vertical wood slats, yellow cellar-boxes which pattern the structure, balcony partitions, shutters and panels and structural columns.

The main facade at the back of the balcony is covered with wood-based fibre and thermosetting resin panels, with a subtle metallic finish, and the front facade with pre-weathered douglas fir slats.

To the north, the thick facade houses the walkways that connect the apartments and the stairwells at the corners of the building which provide vertical access. The walkways, situated on the outside of the building, are wide and open to the distant landscape. The staircases are protected with a perforated metallic cover which maintains a certain level of privacy, opaque from the outside, transparent from the inside.

The office block which houses the medical centre is built in a different style, more abstract, more neutral, with predominantly horizontal lines. The curtain facade is composed of alternating sections of pre-weathered timber cladding boards and wide glazed strips. They form overlapping, offset pieces which interconnect like large scales. This gives the covering a textile-like appearance, lighter and less constructed than the housing block.

The fifth facade, overlooked by the neighbouring buildings, has been treated with care with its green roof, and is where the domestic hot water collectors are located. 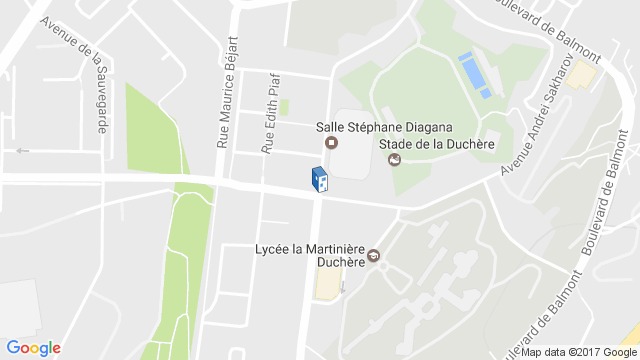