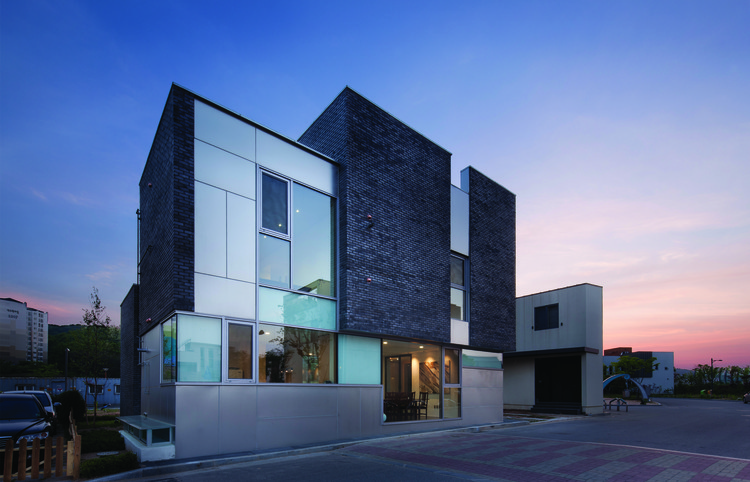 There were three objectives with this middle-class house. First, propose an alternative way of living to a nuclear family living. Second, suggest an experimental house of healing for silver generation. Third, offer a logical architectural solution in a most recent (context-free & referent-absent) suburban town of Pankyo. Samdaeheon, 3-Generation House, launched in 2011 to meet the three objectives.

To overcome generational differences in 3-generation family, space separation strategy was as important as program unification strategy, particularly, between in-laws. Age and physical conditions led the sectional classification of program; parents-couple on the first floor, architects-couple on the second floor, and kids on the attic floor. Family public events were limited to weekend meals and weekday dinners.

Second objective of the project was to focus on father’s worsening walking incapability. iSM proposed a transparent living room. The living room sits at a pivot spot of pedestrian alley and interior courtyard. Intent was to bring seasonal changes of outside inside by extensive use of glass, thereby maximizing the view of people and trees. This would allow sick father to enjoy outside sitting inside. Triple glazing curtainwall system was used.

Third objective of the project was to provide architecturally logical solution in a fairly new town of Pankyo. iSM differentiated public side from private side. On the public side of the building, SS panels articulated dark brick massing. Dark bricks were used in nearby historical citadel of Suwon. On the private side of the house, terraces successively minimized the volume of the building and correspondingly served public space of each floor. In addition, the terrace volume profile was an outcome of maximum solar gain during winter time.