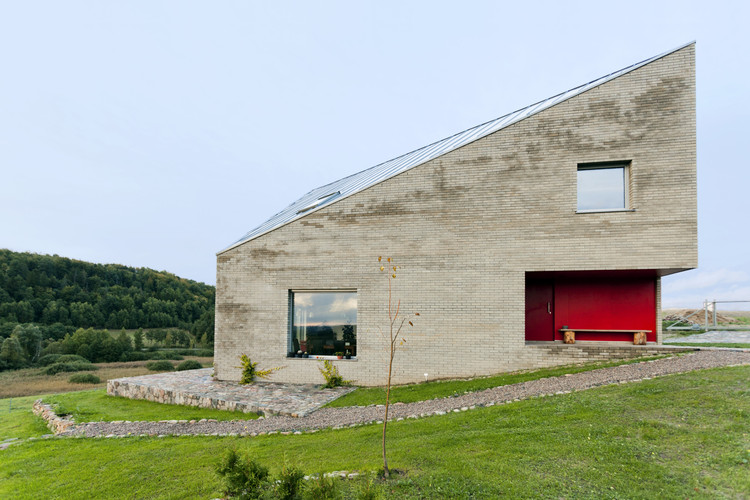 Text description provided by the architects. The house sits at the top of the valley shaped by Radunia, a small river in northwestern Poland. The plot overlooks a picturesque landscape, with numerous hills, fields and forests.

Despite the beautiful location, the site featured some challenging topographical and zoning conditions that called for an unconventional design approach. Local development plans defined that any new building must be constructed at least one hundred meters away from the riverside, which left only a small part in the corner of the plot to be built on. In order to maintain the visual integrity of the built landscape, the zoning regulations require all new-built houses to have pitched roofs of a given angle, echoing traditional Polish rural architecture. They also stipulate that all ridges of the pitched roofs are oriented parallel to an adjacent street.

The plot is located at the end of a cul-de-sac, shares a border with the neighbouring house to the South and is accessible at the buildable North-East corner. The remaining part of the lot slopes northwards towards the river and the natural landscape of the valley. Such a topography calls for a scheme that on the one hand utilises maximum of the natural light, but takes advantage of the views and provides maximum privacy on the other.

The client's brief asked for a simple scheme to satisfy all needs of a resident couple, occasional guests and enough space to showcase an extensive and ever growing collection of artwork and heirloom. It should also be compact enough to minimise heat loss during heavy winters. The brief, the requirement to follow the zoning regulations and the intention to conform to the traditional rural landscape led to an early decision that the design should resemble as close as possible to an archetypical barn house. However these initial constraints were soon revisited as these presumptions had not provoked any satisfying results. Instead, the more logical solution was to rotate the barn in such a way that it made maximum use of the site. However rotating the plan required the roof ridge to be oriented diagonally in order to line up with the street axis.

This move changed the appearance of the house from a familiar barn shape to an abstract one. The dimensions of the rectangular shape in which the layout is inscribed and it's rotation of 34.25° were achieved by numerous iterations. Each study was driven with the aim to optimise the plan, achieve enough South-East sunlight exposure in living areas and on the terrace, provide enough views and privacy from neighbouring sites on the North, and align the roof ridge parallel to the street. The proposed scheme clusters all of the utility and mechanical spaces at the South-East entrance side of the house and opens the communal living spaces towards the river valley on the North-West. The space opens up not only in plan but also in section, integrating the landscape with the interior and despite the northern orientation provides enough sunlight.

The distinctive shape achieved by rotating the traditional pitched roof diagonally to the plan resulted in an abstract solid form and informed material choices. Informed by construction materials of traditional houses in the region, and in order to break down the mass and add another reading of scale while approaching at ground level, brick was used as the primary facade material. In order to maintain the simplicity of the building mass, a grey concrete brick was selected. Similarly, a simple roof cladding which could maintain the uniform appearance of the house, free composition of windows and a carved out corner entrance taken as precedent from traditional dwellings, are designed so that the house stands as an abstract, solitary object in the landscape.