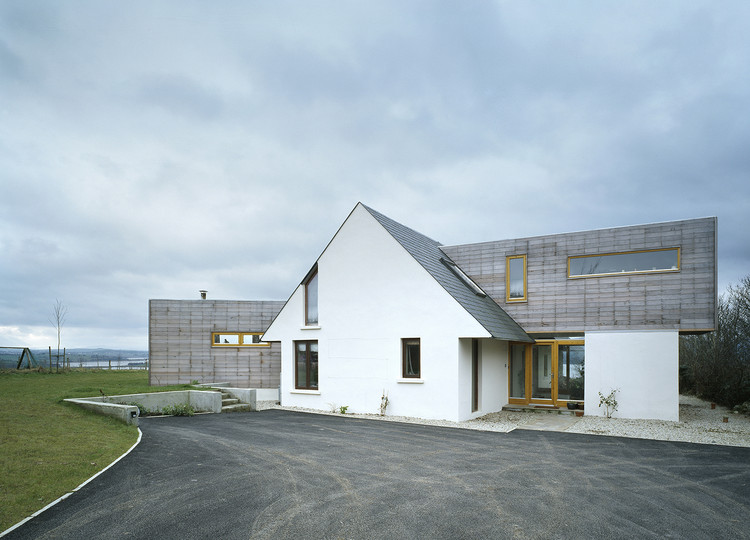 Text description provided by the architects. In the Irish domestic context the extension is ubiquitous yet largely unrecognised. Some 85% of all Irish Houses have an extension of some description and these appendages are usually constructed as a release valve from a frenetic environment caused by growing families. The extended Irish domestic dwelling is an architectural element that can be considered alongside the agricultural cluster as a building constellation that appears to grow organically. These buildings seem to defy formal planning or recognised architectural hierarchies. The project outline here aims to interpret these spatial relationships and address a divergent set of design criteria while still preserving an existing traditional element at the heart of the project.

Located on the banks of a river estuary in north east Ireland, this project consists of two extensions to an existing traditional cottage. The existing cottage at the heart of this project is one room deep and three rooms long and has a linear and narrow form. This project seeks to preserve this familiar from, to maintain the architectural heritage and historical memory of what has existed on the site while addressing the tectonic requir4ements of providing more accommodation for the family.

The original cottage dates from the early 1900’s and as with so many other buildings of this type, the cottage fell into dereliction in the 1970’s. It was restored and re-occupied in the 1990’s and then subsequently extended in 2003/04. The original cottage is orientated with little regard for views or passive solar heat gain, such considerations were seemingly of little importance to the original habitants, but they are the utmost importance to its current occupants. The views from the site are spectacular, with far reaching views of both the sea and the mountains.

This project can be interpreted as where pod/plug-in architecture meets the traditional Irish cottage. In its most simplistic description the design’s overall form is a development of a diagrammatic plan that encompasses the key considerations: the sun path, the various striking views, and an intervention that has the least impact on the form of the original cottage. The occupants of the cottage chose to remain resident while the works were carried out and this programmatic requirement of the extension became part of the aesthetic. The brief asked for a large living room that should take full advantage of the sun and the sweeping views, a new master bedroom and a utility/laundry room. The existing interior of the cottage was also to be subtly re-planned.