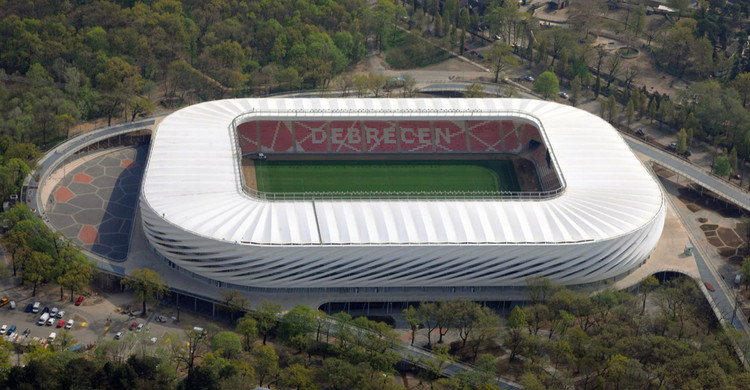 Text description provided by the architects. Tero Auvinen, UEFA consultant, named our new Stadium after Robin Hood referring to it’s amazing location in the middle of the forest. Is it really possible to set a modern football stadium in the heart of the woods? How can such a monumental building adapt to the human scale and provide a people-friendly environment? What is the design concept by which the stadium is able to reﬂ ect the local traditions, national prides and values to create an unforgettable, unique atmosphere and sense of space? How to build a sport venue time- and cost-effectively with high quality and to operate it in a sustainable manner? The Stadium of Nagyerdo designed by the Hungarian architect, Peter Bordas, gives an interesting response to these questions.

Debrecen, the second biggest city in Hungary, is characterized by its expanded, loose urban tissue, wide, sunny streets, spacious squares and green areas. Nagyerdo is a wild forest in the heart of the city, where lot of protected oak trees were waiting for being rescued in the neglected environment. As part of a complex development, the city decided to provide a large-scale reconstruction of Nagyerdo. The aim was to preserve the protectable genres in Nagyerdo and at the same time to draw the area in the city’s circulation as a city park providing a new, liveable, green environment.  To encourage healthier life, the city decided to create new sport and recreational facilities in the forest and to refurbish the existing old football stadium in the heart of Nagyerdo that was built in the 1930s.

A Hungarian architect, Peter Bordas got the commission to design this new stadium with a 20,020-seat capacity, which has to meet the requirements of our modern life. The architect’s ﬁ rst questions were: how to lead the crowd of spectators securely in a forest and how to set an industrial like building complex into the woods. To solve these problems, his stadium concept concentrates not only on the building itself, but on its wide context as well.

The access route for the spectators has to be clearly divided from the area of people having a rest on the park level. To achieve this, a promenade lifted to the level of the tree canopies encloses the mass of the stadium like a ribbon. This architectural element deﬁ nes the border of the most frequently used part of the park thus creating a transition zone between the untouched nature and the artiﬁ cial, manmade world. The up and down arched promenade serves as a running and cycling track and it joins to an open air event square and to other facilities in the park which are waiting for the citizens throughout the year even when there are no football matches in the stadium.

Relating to these new sport and recreational activities in the park, 7000 m2 gastronomic facilities, bars, restaurants, exhibition areas, ﬁ tness and wellness opportunities serve the demand of the people on the park level of the stadium during the whole year. This way the stadium is able to connect to the circulation of the park and to the bustling life of the city and therefore it becomes a fourth generation, 21st century football stadium. The Stadium in Nagyerdo is a multifunctional centre, which provides an ideal space for sport, leisure and cultural experience at the same time, all beneath a single roof.

From the old stadium only the northern gate was saved, so now the dynamic volume of a new building is hovering at the level of the tree canopies inpired by a white lantern. The promenade, which embraces the stadium and is lifted in the air, leads the spectators to the broad access ring of the stadium. From this entrance ring one can access the stadium bowl between the rhythmically placed masses of the kiosks and service areas. The sequence of spaces with their different characters and dimensions expand our perception creating a surprisingly exciting view. Due to the ideal proportion of solid surfaces and transparent openings of this level the calm view of the green forest becomes perceptible everywhere from the stadium cauldron.

The new stadium seeks to attract the atmosphere of the surrounding nature as much as possible preserving the memory of the old stadium. Lounge areas for VIP guests are set above the access level, beneath the western stand, while the 24 sky boxes are located on the top of the building. Due to the special, asymmetric design of the stadium the sky boxes open up a panoramic view not only to the playing ﬁ eld, but also to the forest above the roof of the opposite stand.

To provide the highest level of comfort and experience for the spectators, the stands are formed as a perfect bowl.  The stadium abound with further innovations, as the unique steel skeleton of the roof structure inspired by the opera of ‘La mamma morta’ from Andrea Chenier. White membrane sheeting is used for the skin of the double curvature roof,  which provides a particularly energetic, ﬂ owing appearance for the stadium. At nights, when matches are played, the balloon is illuminated with the colours of the home team and the stadium comes to life and turns to a hellish cauldron.

The aim of this project was to experience being together, not being alienated, to feel with each other and to become a responsible community. After 27-month hard work on the design, planning and construction procedure, the dreams came true and ﬁ nally this year, the most modern stadium in Middle Europe, the new Football Stadium of Nagyerdo, introduced itself to the public 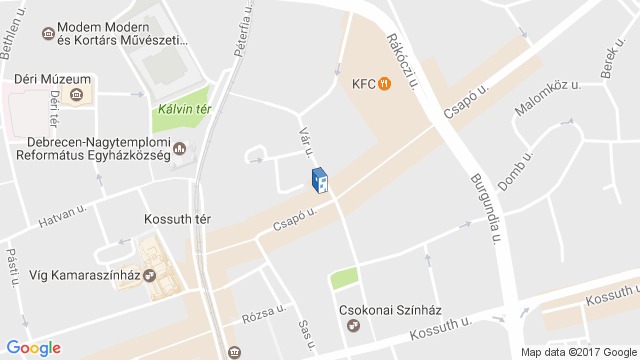 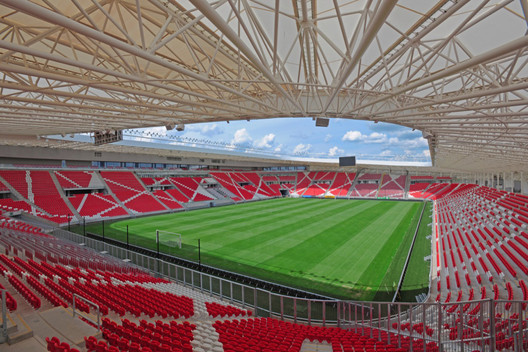