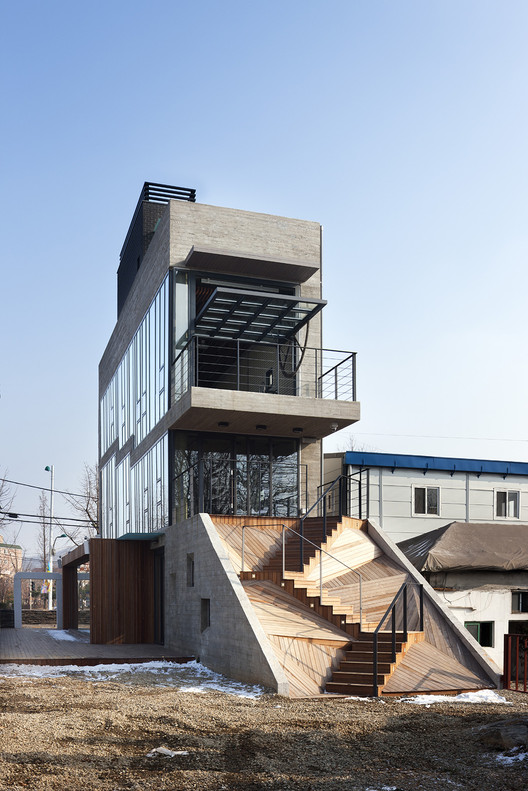 Text description provided by the architects. At this time when industrial society changes to cultural era, we started this project to turn on the cultural switch by building a building, just as putting a book in a empty shelf. Driving along Gyeongin Expressway to go through Gajwa Interchange, you will meet Gajwa-dong, a town in Incheon, South Korea. This town took sea in the old days.

There are lots of lands reclaimed from the sea. But imagining the sea around this area seems almost impossible. We barely believed by seeing a faded photograph with the sea. In this day, roads full of high speed vehicles are surrounding this land. Instead of sea, cars are surging to enclose this land.

In this block, lumber mills, subway construction site and factories are lining the street, while apartments are surrounding the area. Grain of the town couldn't be found, just as a man with his fingerprints fainted by rough years he had.

Actually, this whole block was possessed by a historic family. And there is a age-long Korean traditional house keeping their spirit. This tile-roofed house was built in pine trees from Baekdusan in the late 17th century to endure 400 years. This old house was not like a stuffed specimen in a museum, but alive to put every single trace of life and changes for a long time.

The young owner, who was very gentle and tall, was running a restaurant in this land. Lately he measured the boundary of the land, since the owner of the neighbor's land changed. It transpired that the land that he knew as the neighbor's land was actually his land. This narrow land was 4 meter wide and 20 meter long.

He wanted to build a building in this land. There was a new delivery service company in his neighborhood, and he wanted to make a boundary. The site was a land which suddenly came out without any specific program, without any context. We suggested fixing a book in.

Just like a farmer cultivating a wasteland, who decided, "Well, let's first plant a tree", we also decided to fix a book to find and build a context of this town.

The shape of the land was so simple, and the program was 'nothing'. It could be the most wanted situation for an architect to have freedom to design. But in the event, it was quite embarrassing to stagger.

First of all, we built this building long and divided the floors. Since the south side of the building was attached to neighborhood, we actively blocked that side, while opening the north side to face the land of the family and new residential areas.

Also the zigzag stairs with strong presence were installed on the west side of the building, facing the 400-year-old Korean traditional house. This was homage of a faltering stairs in Sigyeongjeong Pavilion in Gwangju, Jeonllanam-do, which was so impressive that we wanted to try it sometime.

The exterior was finished in exposed concrete with wood grain. We first considered using a traditional material like the old house behind, but the material to capture the flow of time seemed better.

Actually, the best material of architecture is time. Any building with ugly concept or shape can be covered and acclimatized in front of the power of time. This land as well as the building will be filled with time. The only work to do was to find a material to coordinate. The interior was also finished with cement blocks. The whole building was finished consistently in calm gray.

We think the biggest characteristic of Korean architecture is 'dynamics' by reiteration of spaces to induce dozens of layers and movements. To suggest the dynamics, we made the floor slab of the 3rd floor like stairs. This space will be used as a public area such as a seminar room. Also, we installed a huge glass door which can be raised toward the old Korean house on the west.

The stairs on the north side crossing the curtain wall was painted in gaudy red. That line is suggesting past time, present, and future alterations. 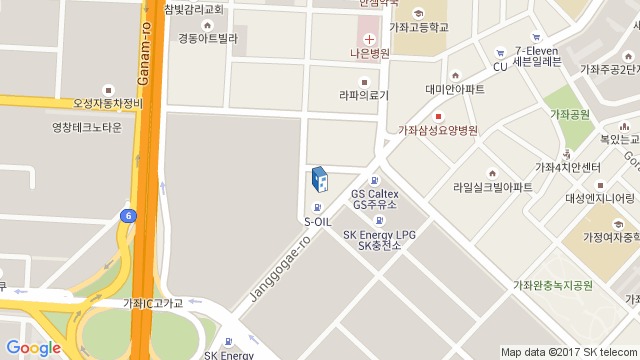