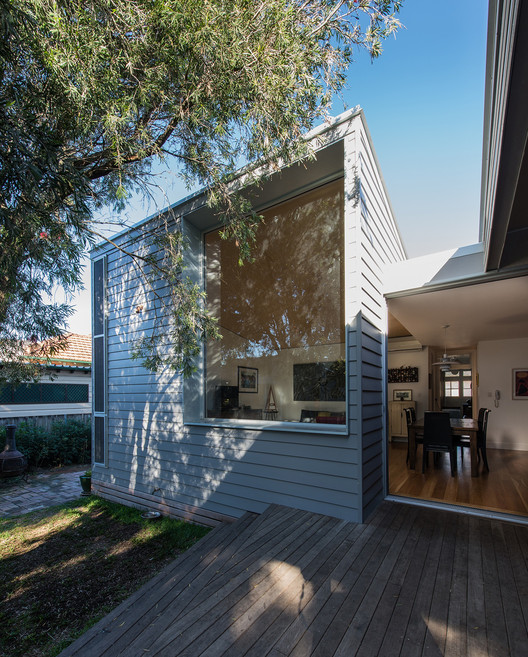 Text description provided by the architects. This project in the heritage suburb of Hamilton, (Newcastle, NSW Australia) was on a large suburban block, that runs approximately North South. A small cottage existed on the site, which had been added to poorly in the past, and there was little connection to the sunny rear garden. The garden was also quite exposed to the western neighbours. The clients (a professional couple with 3 teenage sons), needed more space and a more efficient arrangement.

The strategic approach with the design was to renovate and reinforce the parts of the old house that had integrity, and remove the poorly constructed addition. A long wing was added down the Western side of the block, to provide roofed deck space, a second living area and a transitional space to open out to the garden. This wing also provides privacy from the western neighbours, to the whole of the rear yard. A small building was added to the Northeast corner of the block, to accomodate a home work space and bathroom.

The new addition pitches up to the North and new large glazed openings admit winter sun as well as provide good flow through ventilation. The roofed deck is an additional living space, with wide steps down to the garden. On the western side of the deck, services such as bbq, laundry and storage are located behind formply doors. A surf shower (supplied direct from the water tanks) is located off the Northern end of the building.

Roof water is collected in tanks for re-use on site. Hoop pine plywood is used extensively both as a joinery material and a ceiling lining. Lighting throughout is LED low energy. Flooring is clear finished timber. Cladding is painted timber weatherboard, coloured darker than the original house to delineate new from old.