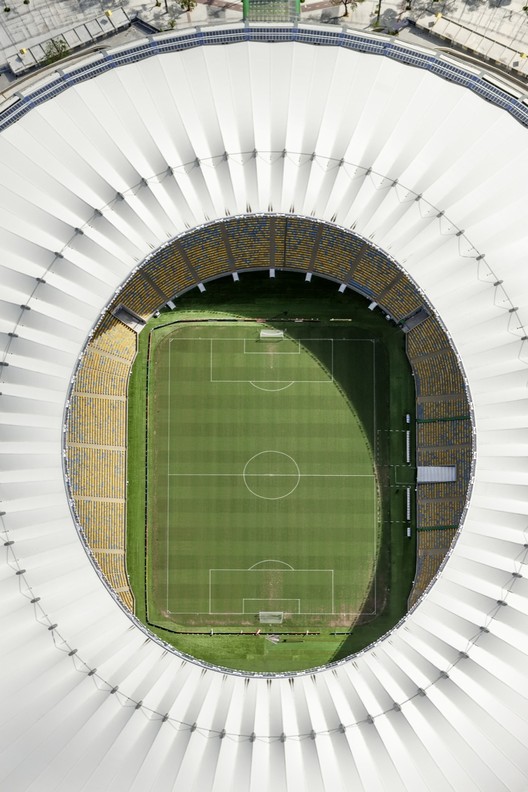 Text description provided by the architects. 200,000 spectators during the 1950 World Cup match Brazil versus Uruguay; 195,000 during the 1963 local derby Fluminense versus Flamengo; Pelé; Ghiggia; Sinatra; John Paul II: This is the history and these are the famous names and figures that made the Estádio Maracanã the world’s most legendary stadium.

Templo sagrado no país do futebol, or “The Holy Temple in the Land of Football”; this how Brazilians refer to the stadium known simply as “the Maracanã.” Worldwide, the name stands for great moments in sports, and there are few buildings that have achieved such a splendid reputation in such a short time. Therefore, schlaich bergermann und partner is delighted to to contribute to the redevelopment of the stadium for the 2014 FIFA World Cup by crowning it with a stunning new roof.

Since 2009, the Maracanã Stadium in Rio de Janeiro has undergone modernization upgrades to meet FIFA requirements for the 2014 World Cup. On April 27, 2013, it was ready for the first match under the new roof. The first official event was the match between Brazil and England on June 2nd of that year.

An analysis of the existing stadium structure revealed that the original cantilevered concrete roof had not only become inadequate in terms of its function, but it also lacked sufficient structural safety in the long run. Thus, the scheme includes the existing reinforced concrete columns of the old stadium bowl to support a new lightweight roof structure based on the principle of a horizontal spoked wheel. An innovative option of this system, which features one compression ring and three tension rings made of high-performance materials, facilitates an almost floating roof. Even in regard to sustainability, this solution beats all conventional roof structures. The spoke cables are tightened between the rim of the wheel – called the “compression ring” in structural engineering – and the tension rings allocated at the inner edge of the roof. The spoke cables are made of high-strength cables.

The roof covering consists of a PTFE coated fiberglass membrane, suspended between the radial main axes. Additional radial filet cables stabilize the surface. At the height of the cable-supported props, these filet cables are suspended towards the lower tension ring, and thus generate a minimal turning point, which serves as water drainage. In this way, the membrane sections attain their characteristic, gracefully curved deltoid shape. The attractive design of the scheme derives from the extremely slender inner and outer edge. This emphasizes the deliberately cautious and considerate intervention into the existing structure.

Therefore, Rio de Janeiro’s iconic Maracanã has not been significantly changed, but rather transformed into a modern landmark to enter a new era. This has been achieved by emphasizing the striking radial structure of the original stadium, as well as of the new roof structure with its filigree, translucent lightweight cable roof. 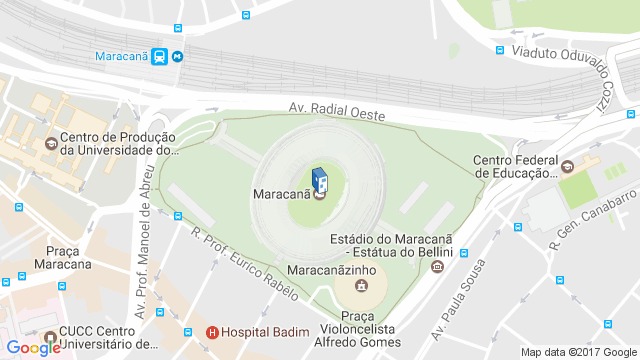